Gender equity not a zero-sum game: In conversation with the World Bank’s Dr Caren Grown

What is the true cost of global gender inequality and sexism? While a definite answer is nigh on impossible, few would be better equipped to unpack the question than the world-renowned economist Dr Caren Grown, Senior Director for Gender at the World Bank Group. Together with the 50/50 by 2030 Foundation Director Virginia Haussegger, the two women dug deep into the data to shine a light on some of the pressing issues around gender equality.

And the numbers were staggering. Globally, countries lose $160 trillion in wealth due to the earnings gap between men and women. Quoting the World Bank CEO Kristalina Georgieva, Haussegger noted that “the world is essentially leaving $160 trillion on the table when we neglect inequality in earnings over the lifetime between men and women”. “That is a despicable figure,” she continued.

When you sex-disaggregate the data, it’s pretty astounding. Women only account for about 38% of global human capital wealth

So where exactly are the gender gaps currently?

“We’ve made incredible progress in areas such as health and education, but there’s still so much work to do. And the gaps are stickiest in the economic domain,” argued Dr Grown

“There’s a set of countries where women work very hard, but they don’t get the returns to that labor.” Even here in Australia and the Pacific, the gender earnings gaps are an economic fact of life. There’s no country in the world where that gap has closed, and we still have high levels of occupational segregation, men and women work in different occupations and industries.”

But rather than viewing it as purely a numbers game, she was also quick to bring the discussion back to what matters the most: “A country’s most important assets are its people”.

So how do we then measure women’s economic empowerment?

“We have significant gaps in voice and agency, and this is very prevalent in the political space. Women are not participating in governance institutions, at the highest levels of governance structures.”

“But it goes beyond participation,” she continued. “It’s actually about being able to meaningfully have your voice heard and reflected in deliberations in the key decisions that affect our lives.”

The issue also goes beyond representation. Reflecting on the gender divide in the tech industry, Dr Grown argued: “When you don’t have women involved in producing and designing and executing the technology itself – the services – we lose out so much. We miss solutions that women can bring to the table.” 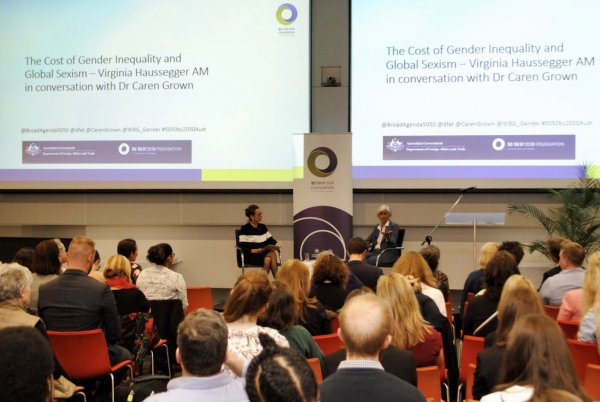 Haussegger pointed out that despite reaching parity in educational attainment, women in Australia also struggle to get through to the leadership levels.

For Dr Grown, the solution relied on institutional change: “We might not have the right promotion policies in place. And even if we have these policies in place we may not have conquered the unconscious bias.”

In some instances, the existing inequalities are also a result of deliberate action. “In Norway, where public companies have to have at least 40% women on their board of directors, some companies have de-listed themselves from the public stock exchange in order to avoid having to meet the gender target.”

“We have to think about this holistically and start to break down those [discriminatory] patterns. We have to start to shake up markets because they are not necessarily going to correct on their own. And companies have to change the way they do business.”

When asked about the possibility of a backlash against gender equality measures, Dr Grown believed that in the context of low economic growth and high rates of male unemployment or underemployment, it was to a certain extent “inevitable”. But as she was quick to point out, “I hate the framing of a zero-sum game, because it really doesn’t have to be that. But we haven’t done enough to bring men along as champions of gender equality, where they see it in their own interests.”

And how about quotas? “Quotas have changed the life aspirations of girls. They’ve seen that they can aspire to be something outside the confines of the four walls of their household. And they work.”

This is not a one-time effort

However, as Haussegger emphasised, we need sustained action to close the gaps: “We’ve just been talking in the last couple of weeks about how exciting it is that the gender pay gap [in Australia] has narrowed, at 14.6% it’s now the lowest it’s been in 20 years. However, back in 2004 it was 14.9% – almost the same.”

Dr Crown echoed the sentiment, and highlighted the need to do more: “This is not a one-time effort. You have to do great global monitoring and tracking, and for that you need the data. There are still too many domains where we are missing data, particularly in this region of the world.”