“If the pandemic has revealed anything it is the dependency of the economy on women’s work. After decades of unequal pay and marginalisation from financial decision making, Australian women have found themselves during this pandemic as the essential workforce of the State.” (Tanja Kovac, CEO Gender Equity Vic)

It’s not over yet!

As Tanja Kovac hammers home on BroadAgenda this week, we may be sighing with relief as Australia seems to have avoided an outright COVID catastrophe, but bold government action is critical right now if we are serious about dragging the nation out of its current gender inequity black hole.

Now is the time to get future policy settings right. Because, as Kovac makes clear, the old, pre-COVID ‘normal’ is in fact a rotten deal for half the population:

“What if normal wasn’t so good for you? Gender pay gaps, segregated workforces, long commutes, expensive childcare and a lack of empathy and support for remote and flexible working. Who wants to go back to that?”

It will take sophisticated leadership to review and realign political values and seize this opportunity for a brand-new day. Is the federal government up to it?

As CEO of Gender Equity Victoria, Kovac has worked with one of the nation’s most progressive governments on gender equality actions. But in times of crisis (and opportunity!) even the Vic’s are showing signs of a woman wobble:

“A few weeks ago, GenVic was told by a senior Victorian Treasury official that engaging in economic discussions about gender equity were “not necessary at this time”.

Those power gals from Chief Executive Women beg to differ!

Sue Morphet says this is “a moment in time that we need to grab”. CEW is calling on government to kick start new thinking with a sharp gender lens in hand. They’ve drafted a ‘platform for recovery’ which, includes a 4-day working week.

So, should we declare the home a ‘workplace’? Yes, Mary Crooks argues we should – because it jolly well is! But will that mean a “levelling of unpaid work at home”? The Executive Director of the Victorian Women’s Trust lays out a powerful argument on BroadAgenda this week for a serious rethink:

“Full human rights for women and genuine equality will never be possible without addressing and changing these deep-seated economic inequalities.”

Australia’s PPL scheme remains an embarrassment. Other than the US, we are the only wealthy nation in the world to offer a miserable 18 weeks parental leave – less than half the PPL offered in the UK; Canada offers a year, Germany even more. In Gender News this week, Prof Deborah Widiss cracks open a US comparison with some ‘fix-it’ ideas for single parents. 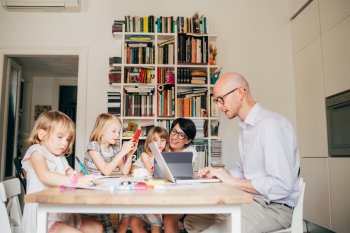 Still in the US, the NY Times reports that almost half of all dads reckon they do most of the Home Schooling. Amazingly only 3% of women agree. Funny that.

Back home in Australia researchers are optimistic about the longevity of our new found ‘team-parenting’. Though – not so in some households! For a sweet laugh, read about this dad’s growing envy of the childfree.

But to close on a sombre note, perhaps the greatest hidden pain in this pandemic is being felt right now in the 980 million households in which the UN reports women are currently in danger of violence. Antonio Guterres, Secretary General of the UN, has spoken out again about “an alarming global surge in domestic violence”, which follows the U.K.’s largest DV support group reporting a gobsmacking 700% increase in calls for help.

No, it’s not over yet. And I’m no Pollyanna. Nevertheless … I’m feeling a little more upbeat about the very real possibilities for change.

We simply cannot return to the ‘old world’.

The evidence is in (and has been for years!). We have all we need to demand and implement a serious ‘snap forward’ to a new way of living and earning that truly reflects the value of women’s work and contribution, and that better supports and nurtures those who need it most.

Canberra has turned cold. The wind is blowing. And there’s a new urgency in the air. I feel a rumble of action brewing: feminist action.

I hope you feel it too!

On that note … here’s a simple action you can take. The 50/50 Foundation is seeking participants for our COVID Gender Roles research. It’s easy – even a bit of fun! Just click here, then chat to Pia if you need more info. (Yes, non-feminists are more than welcome!)

But for now – it’s the weekend and time for a good yak! Curl up with a couple of excellent pod’s featuring our 50/50 Foundation, Co-Dir, Prof Kim Rubenstein on ‘Seriously Social – Gender and the Pandemic’; and Mama Mia’s ‘The Quicky’: Why Has COIVD19 IDO Been So Much Worse For Women?