Beijing +25 and the future of women’s rights

When the Beijing World Conference on Women took place in 1995, I was just starting my career as an employment lawyer in Australia and I recall Hilary Clinton’s reminder in her famous speech that “women’s rights are human rights”.

The Beijing documents laid a powerful and necessary foundation stone for our fight for gender equality – but 25 years later, they remain largely aspirational.

Not only has progress, while real, been slow, some of that progress is itself under threat. We need to accelerate our efforts, and be increasingly strategic, if we want to finish the job.

Every country and context is different, but I want to make four high level suggestions for how we can boost the effectiveness of our efforts.

To do so, I will draw on case studies from my landmark National Inquiry into Sexual Harassment in Australian Workplaces, which I completed early this year.

The inquiry was a world-first comprehensive examination of the nature, drivers and impacts of workplace sexual harassment, and the effectiveness of measures to prevent and respond to it. As well as its insights into sexual harassment, however, the National Inquiry taught me the following valuable lessons.

Firstly, the collective voice can prompt action and change.

I have seen the impact that community activism, voices and engagement can have to support progress towards gender equality.

For instance, the #MeToo movement in 2017, and subsequent media reporting, created momentum for action resulting in support by the Australian Government in 2018, notably the then Minister for Women Kelly O’Dwyer, for our National Inquiry into Sexual Harassment.

Reporting such as that recently recognised by the Walkley awards (on the High Court and AMP) has also shown that the transparency and accountability created by public reporting can create real action.

Similarly, advocacy by students, unions and leaders for many years created the appetite for our survey of sexual harassment and sexual assault in Australian universities, which resulted in all 39 universities agreeing to provide regular updates to the Commission on their progress in implementing our Change the Course recommendations, despite no obligation to do so.

Next, we must address all forms of violence.

As we have been painfully reminded by the COVID-19 pandemic this year, we live in an evolving world.

As we build on the successes of the Beijing documents, it will be important to ensure that our conceptual understanding of violence has also appropriately evolved to include new forms of violence – in particular, technology-facilitated abuse and sexual harassment.

In Australia, it was not until 2018 that both these forms of violence were included in our National Action Plan to reduce violence against women and their children.

Earlier plans had tended to focus on family and domestic violence, which of course should remain a key focus.

However, we know that violence against women in all its forms is interconnected and driven by gender inequality.

We know that violence against women in all its forms is interconnected and driven by gender inequality.

Broadening our focus to include sexual harassment and technology-facilitated abuse ensures that no one is left behind in our fight to eliminate violence against women.

The final report of our Sexual Harassment Inquiry, called Respect@Work, was tabled in Parliament in March 2020. It identified clearly that sexual harassment is a form of violence against women, is widespread and pervasive, and is driven by gender inequality.

Respect@Work made 55 recommendations designed to shift Australia’s current reactive, complaints-based approach to sexual harassment to one that requires positive action from employers and focuses on prevention.

I hope that Respect@Work will serve as a blueprint to other countries to ensure that they are tackling sexual harassment effectively and proactively, and as a wake-up call to all of us to ensure that our conceptions of violence driven by gender equality are broad and inclusive.

My third lesson learned is that we achieve better momentum when we make the case for the benefits of gender equality to everyone.

As we know, women’s rights are first and foremost a question of justice. But achieving gender equality also makes good sense for everyone. Progressing gender equality not only promotes the rights of women, it also increases the efficiency and productivity of our businesses, economy and community. And, in turn, the absence of women from the paid economy acts as a thorny roadblock to the healthy and robust economy for which almost every country strives.

In fact, a recent study by McKinsey found that advancing women’s equality in the countries of Asia Pacific could add $4.5 trillion to their collective annual GDP in 2025, a 12 percent increase over the business-as-usual trajectory.

We have come some way towards recognising this, globally and in Australia. 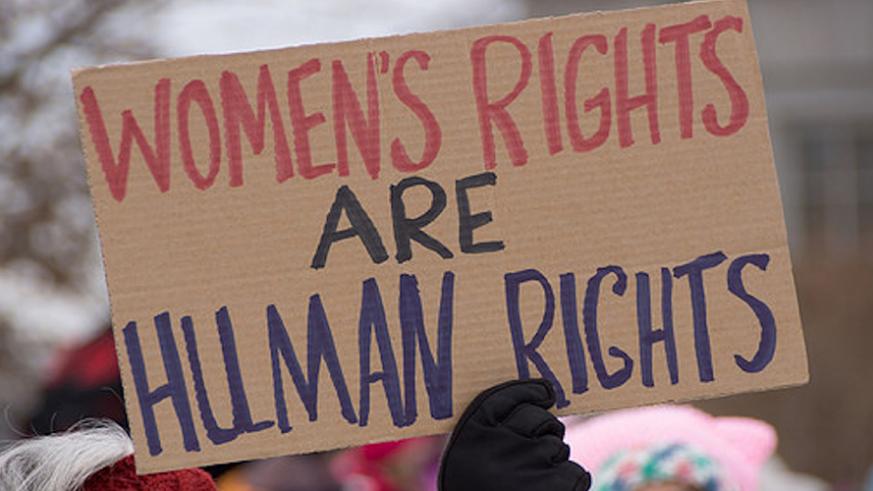 In the 2030 Agenda for Sustainable Development, for instance, gender equality has rightly been recognised as both a fundamental human right and as a driver of progress across all development goals.

Of course, we can’t just make an economic argument – our advocacy approaches must remain victim-centered and rights-focused.

We can’t just make an economic argument – our advocacy approaches must remain victim-centered and rights-focused.

But the economic argument can be a useful additional string to our bows. Respect@Work provided an interesting illustration of this point.

Our inquiry included economic modelling which, for the first time, modelled the cost of workplace sexual harassment to the Australian economy. Deloitte Access Economics estimated for the inquiry that workplace sexual harassment cost the Australian economy $3.8 billion in 2018. 70% of this cost was attributed to lost productivity borne by employers, 23 per cent was borne by government losing tax revenue, and 7% was borne by individuals losing income.

I have already seen evidence that these financial consequences will help me motivate businesses in Australia to take concrete and effective action to combat sexual harassment in the workplace. This lesson applies to most spheres of women’s rights, not just violence against women.

Early indications suggest that countries led by women are the countries that have fared best through the pandemic.

There is also excellent economic evidence to support advancing another key priority for achieving gender equality – boosting the number of women in leadership positions.

In Australia, women hold just 14 per cent of board chair positions, and 31 per cent of private sector management positions.

And yet we have clear evidence that gender-balanced leadership has real, positive consequences for companies’ bottom lines.

Increasing the representation of women across each of the key leadership roles in an organisation added market value of between $52 million and $70 million per year for an average sized organisation.

A recent study by Australia’s Workplace Gender Equality Agency and the Bankwest Curtin Economics Centre found that increasing the representation of women across each of the key leadership roles in an organisation added market value of between $52 million and $70 million per year for an average sized organisation.

These were not findings of correlation – they were findings of causation, meaning more women in leadership caused better business performance.

Respect@Work also highlighted the business benefits of gender-balanced leadership, in reducing the prevalence of sexual harassment and improving responses.

To progress gender equality, we need to be presenting all the convincing evidence at our disposal on the benefits of gender equality for our societies.

In a post-COVID world, where the focus for many nations will be on economic recovery, we need to ensure that the case for including gender equality as a necessary step towards national productivity is loud and clear.

The last point I would like to make is that the only effective action is inclusive action.

Too often, women and girls facing intersectional challenges fall through the gaps of our government and community efforts to protect and promote women’s rights.

In Australia, our failings to protect those facing compounded disadvantage are stark.

Consider the issue of violence against women: Aboriginal and Torres Strait Islander women currently experience violence at 3.1 times the rate of non-Indigenous women.

In 2019, Australian women with disability were almost twice as likely to have experienced physical or sexual violence from a partner in the previous 12 months than women without disability.

And a national survey of LGBTQI young people found that 24% of respondents had experienced verbal or physical abuse in the family home.

These disadvantages are repeated in other spheres: financial independence, workplace leadership, and participation in political decision-making to name just a few.

It is not just these women who are missing out – our society, too, is missing the valuable contributions these women could make to our communities and our economies.

Protesters hold up placards during the Women’s March in London on January 21, 2018 as part of a global day of protests, a year to the day since Donald Trump took office as US president.
Hundreds of people gathered outside Downing Street in London to voice their frustration at sexual harassment, violence and discrimination against women. / AFP PHOTO / Daniel LEAL-OLIVAS (Photo credit should read DANIEL LEAL-OLIVAS/AFP/Getty Images)

Respect@Work again illustrated starkly to me the importance of inclusivity and targeted measures for those most at risk.

We found that the changing nature of work meant that many workers were falling through what protection nets did exist – particularly workers in the informal economy, casual workers, workers in other forms of insecure employment, client-facing workers, and workers facing intersectional challenges.

We made recommendations designed to ensure that these workers are protected in legislation and policy moving forward. Some of our recommendations were focused on one factor which I have come to believe is crucial to inclusive policy-making – data.

Data has been a critical lynch pin for momentum on sexual harassment in Australia.

Data has been a critical lynch pin for momentum on sexual harassment in Australia. Respect@Work drew on four national surveys conducted by the Australian Human Rights Commission between 2003 and 2018. These surveys gave us insights into both the nature of the problem, and the likely effectiveness of solutions.

For example, the industry-specific data collected in 2018 allowed us to identify which industries had the highest reported rates of sexual harassment, and provided an evidence base for industry-specific, targeted action.

In our next national survey, I intend to sharpen our focus on intersectional challenges.

Throughout the pandemic, we have seen the importance of using disaggregated data to track our progress against COVID-19, and to track the impacts of associated government restrictions on our community.

As a Victorian, the enthusiasm with which my children waited for our daily COVID-19 numbers, I hope, reflects the beginning of a new generation of people who understand the life-saving and life-changing importance of good, rapid, responsive data.

As the COVID-19 pandemic rages on throughout the world, countries everywhere are thinking about how to rebuild.

The evidence is clear that, if our recovery efforts focus on creating more equal and diverse societies, women, girls and societies as a whole will benefit enormously.

25 years on from Beijing, with many of the economic and social structures we took for granted a year ago now in flux, this is a golden opportunity to reaffirm the spirit of the Beijing documents, and use everything we have learned in the past 25 years to take swift, meaningful leaps forward towards gender equality.

Kate Jenkins is Sex Discrimination Commissioner at the Australian Human Rights Commission and an Australian lawyer. . This is an edited version of her opening address to the Beijing Platform for Action at 25 conference. The full speech is available here.