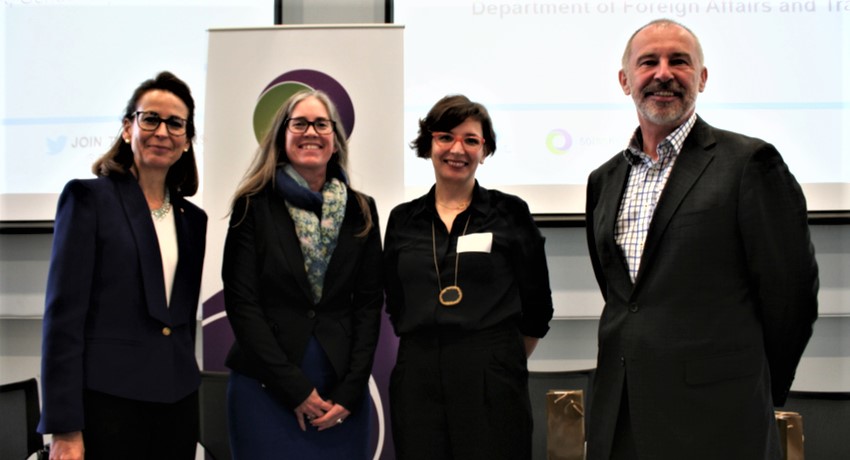 David Morrison AO had the audience spellbound with the story of his own awakening to the lack of gender equality within his organisation. Admitting that he only become aware of the issue later in life, his honesty and authenticity packed a powerful punch.

“In audiences like this, I fear I’m an imposter. I’ve never been discriminated against. I’m not qualified to discuss culture, but I can discuss my own journey.”

Women have always been shaping the country. We just haven’t heard their stories

Morrison highlighted the complexities of the topic, noting that representation is not just about the numbers. “We have over 60,000 years worth of stories in this country. Women have always been shaping the country. We just haven’t heard their stories.”

To bring about change, he underscored the importance of bringing men into the picture. “The fight for equality has been carried on the shoulders of women for generations after generations. But we have the opportunity to do something different.” 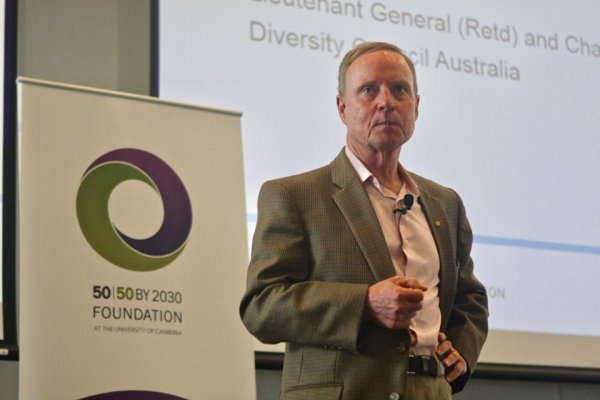 While improving gender diversity is the right thing to do, ultimately, it also serves a greater purpose. “When we’re talking about 50/50, when we’re talking about opportunities for our daughters as well as our sons, when we’re encouraging Australia – already a multicultural country – to be truly diverse and inclusive, we are focused on a world that is better than the one we live in. And this is the legacy we want to leave for our children.”

Glenys Beauchamp PSM, Secretary, Department of Health, tackled the topic of how to embed diversity and inclusion into workplace culture. “The business case for diversity is clear”, she argued. “Data shows that diversity improves organisational performance.”

Everyone has a leadership role to play

For Beauchamp, leadership itself is an inclusive notion.  “Everyone has a leadership role to play. Leadership skills include listening, meeting protocols to hear diverse voices, and respecting and seeking out diverse views.”

People, and creating a supportive environment are the keys to increasing workplace diversity. “You can make any program work as long you have the right culture.” 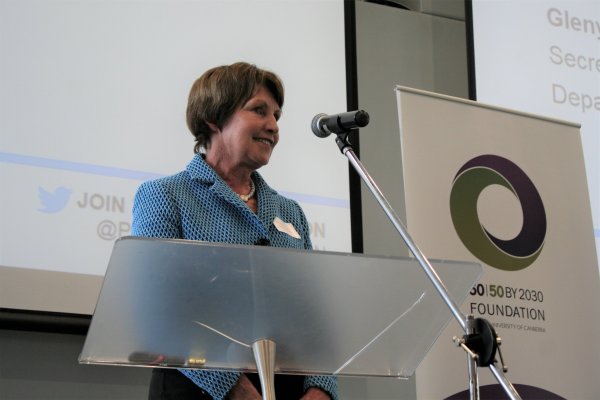 Evoking the old adage ‘you can’t be what you can’t see’, she stressed the importance of role models. “The more women are visible, the more other women look at them and say ‘hang on, I can do that too’.

We need to encourage confidence, and encourage women to step up

But individual support is equally important. “We need to encourage confidence, and encourage women to step up. Being willing to take risks, and not be afraid to fail, is crucial.”

Jo Talbot, Chief Operating Officer at the Department for Communication and Arts discussed the need to prioritise gender equally across the whole public sector.

Let’s celebrate the 50/50 APS secretaries achieved in 2018, but let’s also note that it took 32 years to get there

While acknowledging the significant progress already made in gender equality in the APS, she reminded the audience that we need to pick up the pace if we want to see further improvements. “Yes, let’s celebrate the 50/50 APS secretaries achieved in 2018, but let’s also note that it took 32 years to get there.”

To keep moving forward, she argued the need to adopt an intersectional approach that goes beyond gender, and takes into account factors such as ethnicity.

In addition, she offered three key measures for inclusive workplaces: Using gender inclusive language that does not label or imply; expecting leaders to engage in gender equity work; and having active conversations about gender equality. 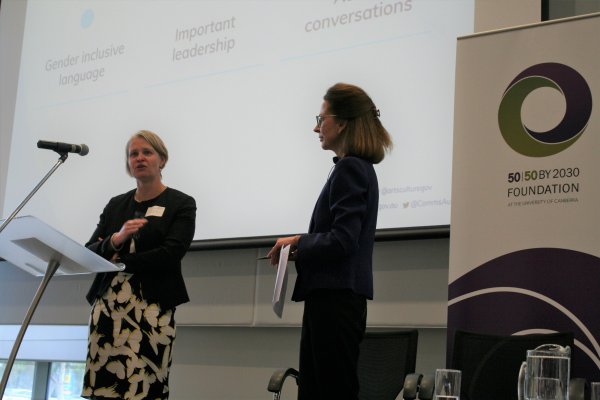 Kirsty Dwyer spoke about the employers’ role in increasing the number of women in the workplace, and encouraged exploring diverse recruitment methods. “Don’t be afraid to do something different. Allow the candidates to express their value to the recruiter in novel ways.”

Targets need to be operationally realistic within the timeframe

Sometimes it also comes down to the language used in job application, with simple measures such as redesigning selection criteria leading to an increased number of female applicants.

While advocating for measures to increase diversity, she also provided an important reminder. “Targets need to be operationally realistic within the timeframe.” 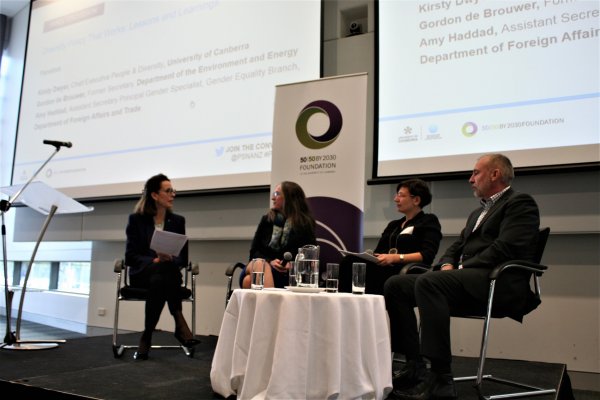 Amy Haddad highlighted the difference that flexible working options can make for improving gender diversity. Among other things, DFAT has implemented measures that enable parents with babies and small children still continue fieldwork, thus making participation in the workforce more accessible to a wider talent pool.

However, she also noted that flexibility is not just about parenting. “Flexible workplaces should be available for everyone. For those who want to do volunteering, and those with aging parents for example.”

Addressing the hairy topic of backlash against gender equality measures, Gordon de Brouwer argued that the key to avoiding pushback is to keep having open discussions, and reassuring people that everyone is hired on merit.

We can’t get away from merit. We are always looking for the best person

When challenged about the flaws in the merit principle, he continued, “We can’t get away from merit. We are always looking for the best person. However we have to acknowledge that there’s been structural barriers and things such as unconscious biases. So in that sense, there is a level of subjectivity to the concept of merit as well.”

The last panel of the day included the founding partners of the 50/50 by 2030 Foundation: Professor Mark Evans, Director of Institute for Governance and Policy Analysis; Emeritus Professor Meredith Edwards AM; and Carmel McGregor PSM.

The panel provided an overview of the research report ‘Not yet 50/50′ by the Institute for Governance and Policy Analysis, which focused on the barriers for women’s career progression in the public sector. One of the significant findings, as pointed out by Professor Edwards, was that men and women’s perceptions as to why there is a gender gap in leadership roles vary greatly, highlighting the need for open and honest discussions in the workplace. 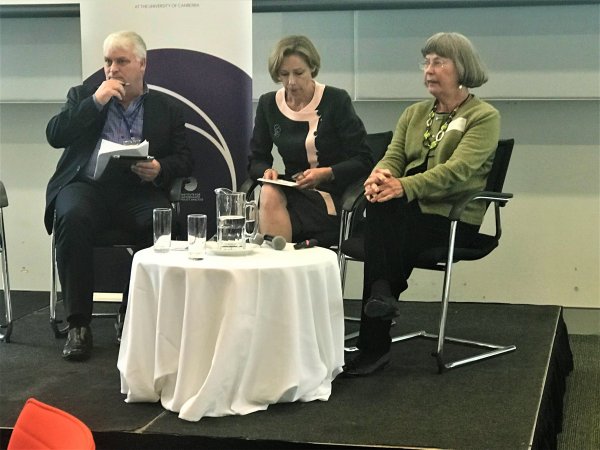