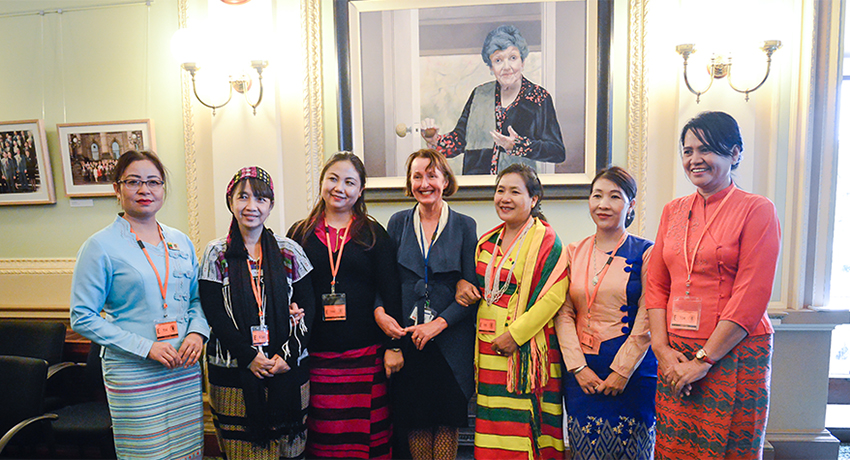 During Myanmar’s historic 2015 election, I was visiting the country as an International Election Observer. On the morning of Friday 6 November, I picked up a copy of the Irrawaddy Times from a Yangon news stand to see the image of Aung San Suu Kyi, looking like she was walking on water. Above her in red letters, a familiar political slogan: “It’s Time”.

If you travel in political circles and contest elections yourself, you learn to sniff the breeze. I could feel the momentum, and I knew that, barring military intervention, Suu Kyi’s National League for Democracy was going to win resoundingly. And win she did – in a landslide. So too did women from all over Myanmar, doubling female representation to make up (still only) 10.3% of the new parliament. 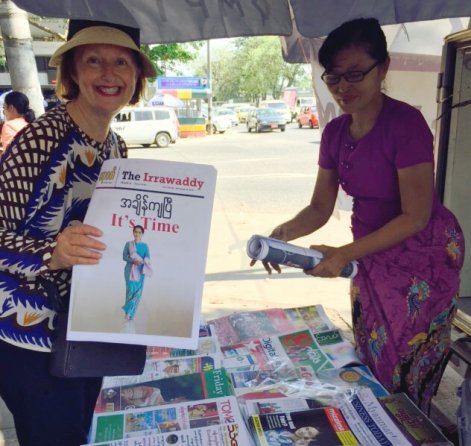 Blog author Judith Graley holds a copy of the Irrawaddy Times prior to the 2015 Myanmar elections.

Among these new female MPs is Nan Moe from the Ta’arng National Party. I met Nan Moe when I signed up to be a mentor along with five other Australian female MPs. In January 2017 we travelled to Myanmar to meet six female Myanmar MPs, who would become our mentees.

The mentoring program is supported by the International Womens Development Agency (IWDA) in partnership with the Akhaya Womens Organisation in Yangon to support and empower women in South East Asia. It is delivered as part of the Women’s Action for Voice and Empowerment (WAVE) program, which is generously funded by the Government of the Netherlands.

The Myanmar Parliament in the capital Naypyidaw is a big place: grandiose and isolated, it’s not very comfortable territory for those unfamiliar with it. It was there in a mentor matching meeting that was both inspirational (with stump speeches from all women filling us with admiration) and a “Perfect Match” dating show-style process that made us all nervously giggle, that Nan Moe chose me to be her mentor.

We have been talking, laughing, and crying together, and exchanging emails, photos, tips and resources ever since. She’s feisty, smart, and funny. We talk about politics. I can’t solve many of her issues, but I can support her to face the challenges of the job. Some institutions are the same everywhere – resistant to changes such as female advancement.

We have been talking, laughing, and crying together, and exchanging emails, photos, tips and resources ever since.

She shares my passion for education opportunities and gender equality, so we talk about playgroups and family violence. We chat about the highs and lows of political life, about the capacity to do good things for others, and the isolation, criticism and weariness that comes with public life. 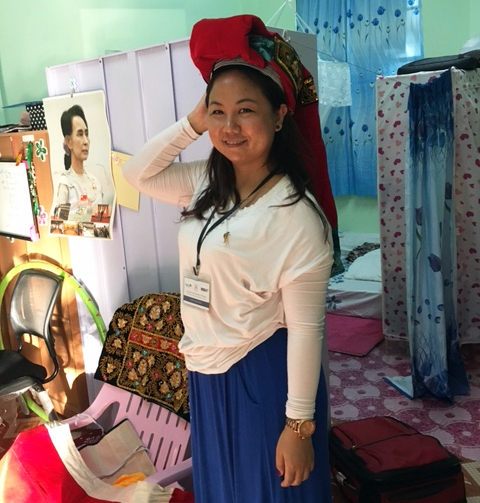 New Myanmar MP Nan Moe, who is participating in the mentorship program.

Some of it gets lost in translation, but for both of us it works like a therapy session where we both relearn, refresh and reload, and then go back to our respective environments and get on with our work.

Nan Moe knows what discrimination and political envy looks and feels like. As she is in her first term, these are raw experiences for her. When she wanted to deliver a speech about a sexual assault case where the accused perpetrator was let off lightly, she asked me for advice.

We chat about the highs and lows of political life, about the capacity to do good things for others, and the isolation, criticism and weariness that comes with public life.

Nan Moe knew the statistics and the facts, but she sought my help on how to sell the issue to the male MPs in the parliament. We talked about how to contextualise her address: the sisters, daughters, wives, cousins and aunts of the men in the audience became her focus. After her speech, she was congratulated by some, but several male MPs asked her “How did you learn to speak like that?”.

Emily’s List reports that of all the support they provide to female candidates, including funding and research support, it is their mentoring program that is most highly valued. Political mentoring works because it is both real politics and significantly personal.

Our Myanmar mentees joined us in Australia recently on a visit that was jointly funded by the IWDA and the Australian Government. Along with the other mentees and mentors, we stood in the Parliament of Victoria in front of a painting of Joan Kirner titled “Opening Doors”.

Joan was my mentor the first time I ran for Parliament. I ran, never expecting to win, and lost. In the aftermath of that loss, Joan told me that “When women support women, women win”. She was true to her word, and when I ran again she supported me. That time I won the seat of Narre Warren South.

There are many women who need support to get into parliament and stay there. Working with local organisations, with support from international agencies and governments, is a powerful partnership and provides an ongoing education for all involved.