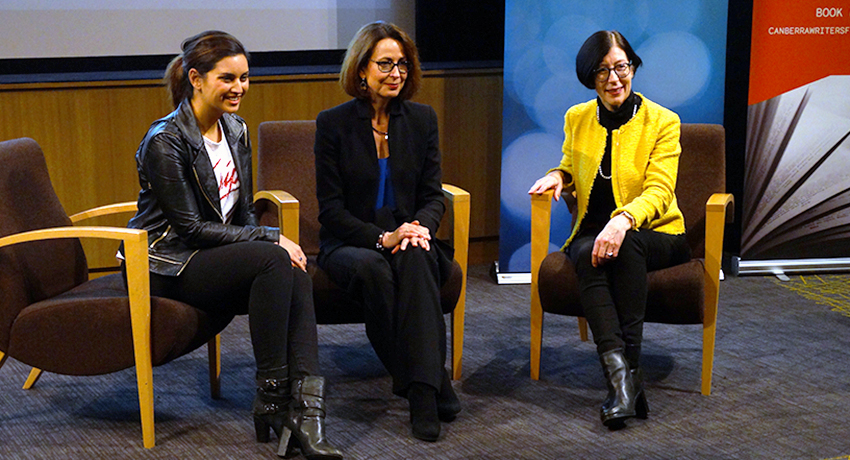 The first event of the day was a panel on Women in the Media held at the National Press Club. Katharine Murphy, Politics editor of the Guardian Australia chaired the discussion, which featured author Kathy Lette and the ABC’s Four Corners presenter Sarah Ferguson. Joining them was Virginia Haussegger AM who, before taking up the position of Director of the 50/50 by 2030 Foundation at the University of Canberra, was a journalist and television presenter for more than 25 years.

Katharine kicked off the event with the question to the panel: “Are women and men in the media equal?”. To which the panel replied in unison: “No!”.

Sarah pointed to progress towards gender parity at the ABC, with women producing, directing and presenting flagship programs, but acknowledged that this was not representative of the Australian media in general. Virginia stated that her biggest concern is how women are being represented on screen, with stereotypes of what women look like and what they are capable of seemingly going backwards. 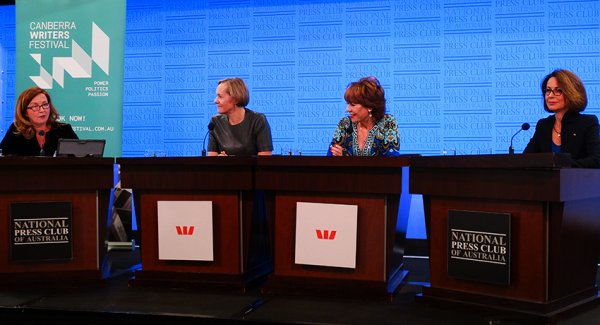 Kathy, who has recently published her eleventh book, said that despite her success as a best-selling author she has long railed against “the pink book cover”, but has always found herself pigeonholed as a writer of “chick-lit”.

She said that the sexism found in the media – both on our television screens and in our newspapers, but also attitudes towards women who work in the field – is a slow drip-feed. But, she said, “it is pervasive, and that is the problem, because it is so deep-seated that it’s often difficult to identify and call out”.

When asked by an audience member what more could be done to resolve the issues faced by women in the media, Sarah declared that “we have to be part of the solution. I’m not waiting around for men to figure it out on my behalf”. But this inequality has nothing to do with women’s ability to excel in the media: “Ever since journalism has been a profession, there have been fantastic female journalists”.

We have to be part of the solution. I’m not waiting around for men to figure it out on my behalf.

Another question from the audience addressed the gender pay gap, and whether the panellists were hopeful that it might be resolved in their lifetimes. Virginia responded that “gender equality is not inevitable, we cannot assume that it will resolve itself, in fact recently progress has stayed still and even gone backwards in some areas”.

Sarah argued that “the changes that we need to see are legislative and structural, particularly regarding transparency of salaries. We will never achieve a level playing field if there is no transparency”.

At the National Library of Australia for the second event of the day, Virginia hosted a conversation with authors Jamila Rizvi and Catherine Fox, both of whom have recently published books on gender in the workplace. Catherine’s book, Stop Fixing Women, focuses on the structural shortcomings of the modern workplace, and argues that it is these structures that need to adapt in order to better accommodate women.

Jamila’s Not Just Lucky is aimed towards millennial women who are commencing their careers. Her book lays out the realities of navigating the workplace as a young woman, and explains how sexism is entrenched within these environments.

She says that because of the research data she has included in the book, it’s not a happy read at times, but she believes that when it comes to gender inequality, “the data is the only thing that convinces people that there is a problem”.

When it comes to gender inequality, “the data is the only thing that convinces people that there is a problem”.

Virginia asked both authors if they felt that women would benefit from a manual of sorts to assist them in navigating their professional lives. Both agreed that the workplace can be bewildering for women – and men – at many stages of their careers, but felt strongly that women do not need to navigate it alone.

The conversation covered quotas, targets, boards and babies, and the excuses that some organisations have offered to explain their inaction on gender inequality. Catherine announced that with so many educated and talented women contributing to the workforce, arguments such as “we looked for a woman to join the board but we couldn’t find one” are now well-past their use-by date. 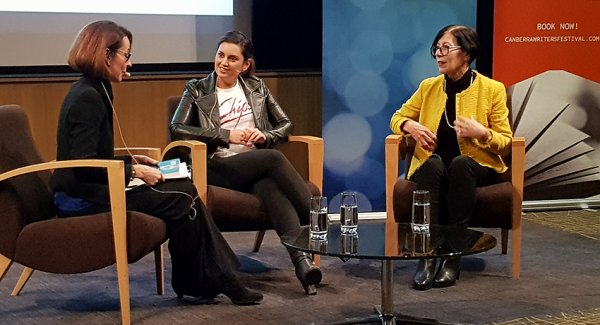 Virginia Haussegger speaks to authors Jamia Rizvi and Catherine Fox at the National Library of Australia.

Fittingly, the key messages from both events were about power, politics and passion. Firstly, the importance of role models for younger women navigating the workplace cannot be underestimated. At the same time, audiences need to see women who look real, and who are more than decorative.

Secondly, the existing cultural, political and social structures preventing women from achieving real equality will not resolve themselves. Women need allies, not just in other women but in their male colleagues. Jamila pointed out that “there are some damn good blokes in workplaces who do realise this stuff is going on, and that it is a problem”.

There are some damn good blokes in workplaces who do realise this stuff is going on, and that it is a problem.

Meanwhile Virginia reminded the National Library audience that gender is not just about women, it is about men too, and that it is time for Australia to grasp the potential and value of diversity in all its forms.

Finally, both panels of women brought home the point that women must stop apologising for themselves. Sarah stated emphatically to the Press Club audience: “Stop saying sorry!”, while Kathy declared “we have to stop wanting to be liked”. Just as passionately, Jamila urged women not to wait until they think they are perfect to speak up and make waves, “because we need women to lead the way”.