A seat at the Roundtable: Women in Victorian Local Government

Why is it important to have more women on council? Women make up just over half the population, and we need to have women’s voices heard and women’s issues addressed. Women bring a different perspective, experience and have different leadership styles.

Studies show that gender diverse teams are more effective. There has been significant research on the effect of women in business, and the evidence shows that companies with women in senior roles perform better in many areas, including financially, on governance, ethics and responsiveness.

Numbers in Victoria have increased because there has been bipartisan support from State Governments. Both Labour and Coalition Governments have funded a non-party political campaign to increase female numbers, and mentor candidates and new councillors. In fact, the only time there was a drop in the number of women elected was when such a campaign was not run.

But while some parts of the country are doing well, the numbers in NSW have remained static. Nationally 32.1% of councillors are women. South Australia, with 29%, is the only other State in Australia with less than 30% of women councillors.

When more women are elected to Council, in turn more women are elected or appointed to leadership positions. Victoria has the highest number of women Mayors, at 41%. Victoria also has a higher percentage of women CEOs, although they are still very low. It is the councillors who appoint the CEO/GM. Therefore, having women at the table makes a difference when appointing people to senior positions.

Figures of senior positions below the CEO are not readily available. However, LGPro in Victoria has supplied data. Women make up 39.12% of level 3 and 34.22% of level 2 positions. And thirteen of the 79 CEOs, or 16%, are women.

Gender diversity is better at Metro Councils than at rural councils. Research shows that women are under-represented in candidate pools but once they apply are better represented in shortlists.

The Roundtable is giving consideration to a number of initiatives, including quotas/targets for women in senior leadership roles; embedding gender equity considerations into the review of the LG Act; developing a listen and learn program for the sector; gender neutral recruitment for Councillors and recruiting managers (whereby the candidates’ names are removed from applications before they undergo review); working with peak bodies to increase the talent pool, and sharing best practice case studies.

Women can be – and are – elected. A concerted non-political campaign can and does increase numbers of women elected to local councils.

So what lessons are there to learn from local government?

Firstly, women can be – and are – elected. A concerted non-political campaign can and does increase numbers of women elected to local councils.

Second, the presence of more women at the table increases the rates of women being selected to leadership positions.

When women do apply for senior roles they have a high chance of being selected or shortlisted.

Finally, gender-neutral recruitment should be explored as a hiring strategy, not just in other levels of government but across the broader business community. 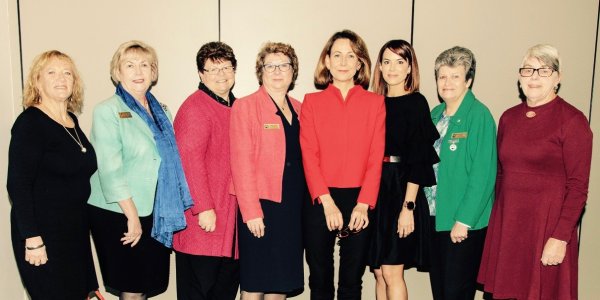 Members of the ALGWA with Keynote speaker, Virginia Haussegger, at the Annual Networking Breakfast, 2017.