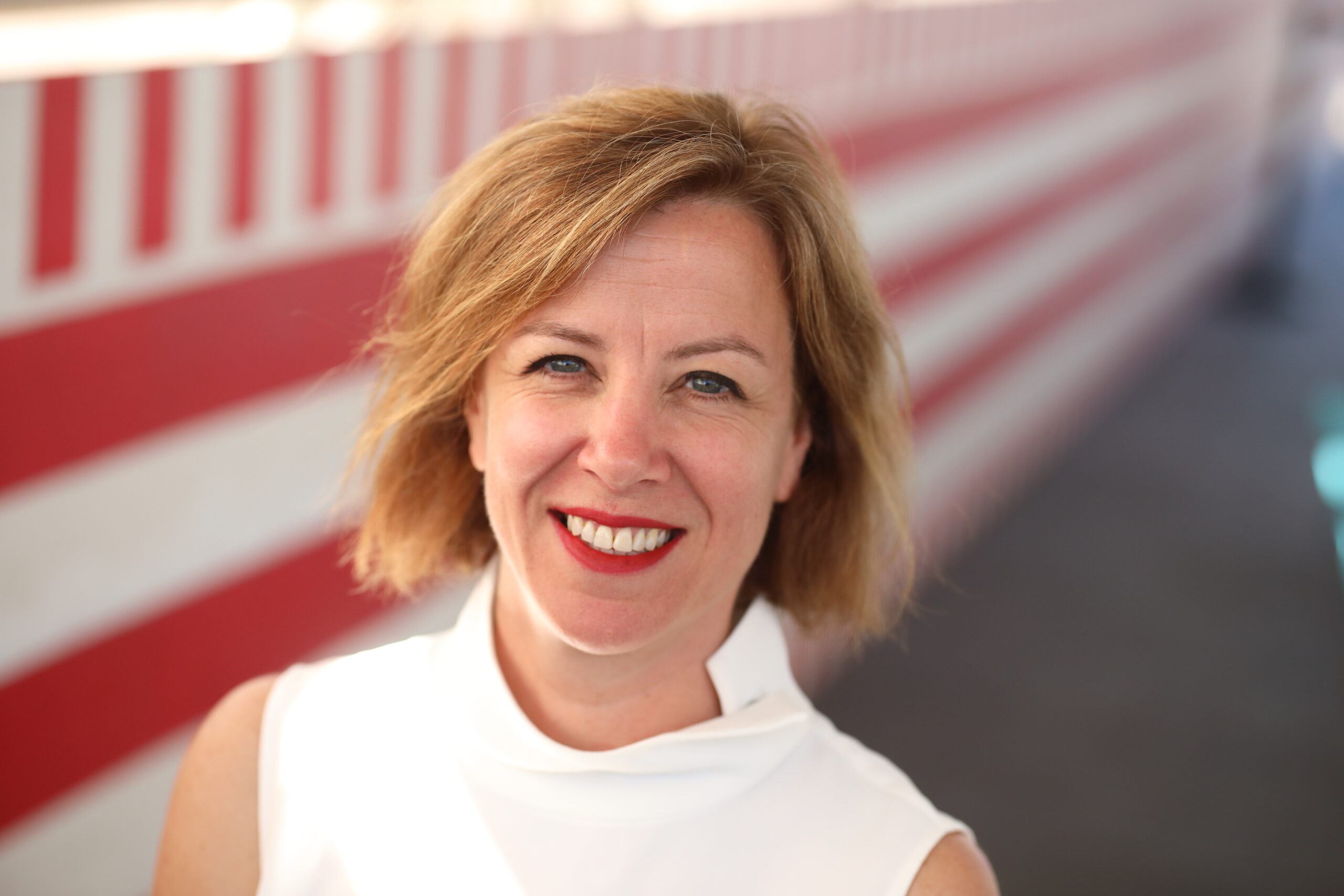 The childhood trauma that devastated my friend, Kate

This is an edited extract from Jo Dyer’s Burning Down the House: Reconstructing Modern Politics, released this month as part of Monash University Publishing’s In the National Interest series. In this part of the book, Jo delves into her friendship with the late Kate Thornton, who made sexual assault allegations against former Attorney General, Christian Porter. This text is published with full permission.

In her Quarterly Essay ‘The Reckoning: How #MeToo Is Changing Australia’, Jess Hill provides a compelling overview of the #MeToomovement in Australia. She describes its false start, and how it was nearly derailed by our anomalous defamation laws and News Corp’ssloppy pursuit of Geoffrey Rush. But by March 2021, everything had changed. As Hill writes, ‘three women— Kate Thornton, Grace Tame and Brittany Higgins—would trigger a resurgent #MeToo movement in Australia, and a citizen-led insurgency against the Morrison government’.

The 2021 Australian of the Year Grace Tame is a remarkable force, a young woman who has lived through great trauma, a survivor of carefully planned and devastating sexual abuse who has emerged as a poised, powerful advocate for fellow survivors. Equipped with killer lipstick and one-liners, she is articulate and unapologetic, describing her own abuse, and, importantly, the grooming that preceded the assaults themselves, and thereby changing the conversation around child and sexual abuse. While her impressive advocacy only inspired the Morrison government to review the way our Australians of the Year are selected, in others it fuelled courage.

One of those galvanised was former political staffer Brittany Higgins, who, watching an emotional Tame accept the Australian of the Year award from Morrison in January, was sickened by the hypocrisy of the Prime Minister lauding Tame for her bravery in speaking out when his government had sought to silence her.

Higgins had told her boss, then defence minister Linda Reynolds, of an alleged criminal violation at the hands of a colleague, Bruce Lehrmann. It was alleged to have taken place in Reynolds’s ministerial office when Higgins passed out on a couch after a drunken night out. The way herallegation was handled by Reynolds, by her subsequent boss Michaelia Cash, their boss Morrison, and the many, many people who were told ofthe alleged crime committed against her, subsequently came under damning scrutiny.

Higgins was consistently treated as a political problem to be managed and silenced, rather than as a valued colleague. Despite the ever-growing list of people aware of Higgins’s story, including senior members of and trusted fixers in Morrison’s office, and despite the fact thatjournalist Samantha Maiden had submitted an extensive list of questions to that office the week prior, on 15 February Morrison told parliament with a barely straight face that he, along with the rest of Australia, only became aware of Higgins’s allegations when he read them in the press that morning. No-one believed him. He then proudly reported that he’d needed his wife to impress upon him the seriousness of what had allegedly happened, describing the game-changing conversation he’d had with Jenny as if his ignorance and lack of empathy were commendable. The distress Brittany Higgins allegedly suffered was to Morrison relatable only in the context of the possibility his daughters could suffer a similar fate. If he’d been childless, presumably he would have remained indifferent, and if he’d had sons, well, who knows wherehis sympathies might have lain.

The third name Hill cited, Kate Thornton, belongs to a friend of mine. We became friends as precocious teenagers at that pivotal time when intense relationships are forged—some lifelong, some more transitory, but all invoking that seminal period when you feel you are on the edge of your life, preparing to take off, hoping to fly. Despite her brilliant mind and great talent, Kate never took off as expected. When we reconnected in July 2019, she told me why.

She had fallen prey to a trauma that had not only kept her grounded but devastated her. She said she had been raped by attorney-general Christian Porter as a teenager in January 1988 and, despite her efforts to bury it, to move past it, she’d never recovered.

Kate had not told me of her suffering at the time, nor in the intervening decades when we’d fallen out of contact, but she was ready now to act, and she intended to report the alleged assault to the police. I was sick with fear for her about what lay ahead and the retributive intrusivemedia she would confront from the government’s News Corp allies but offered her my unconditional support. She spoke to other friends from the time, marshalling her army. She engaged legal representation, the heroic team at Marque Lawyers, and had a preliminary meetingwith NSW Police that led to the formation of Strike Force Wyndarra in the Child Abuse and Sex Crimes Squad. But upon her return to Adelaide in March 2020, her interac- tions with NSW Police stalled after deputy commissioner David Hudson refused the request of Wyndarra officers to travel to Adelaide to take Kate’s statement, despite the travel having already been approved by three levels of the police hierarchy.

The impact of the delay, coupled with Kate’s distress at hearing of the success of George Pell’s High Court appeal, another case of historic abuse relying solely on the testimony of the victim, contributed to the deterioration of Kate’s mental health. She died by suicide in June 2020. The day prior to her death, she con- tacted the police to tell them she would not be continuing with her complaint. Sheneither withdrew nor resiled from her allegation. In the months leading up to her death, cognisant of the toll it was taking on her mental health,she secured undertakings from some close to her that, should the burden become too heavy for her, they would continue a posthumousfight for justice on her behalf.

Kate’s story became public eight months later through the tenacious reporting of Louise Milligan and Four Corners. Although Milligan’sstory referred only to allegations against a Cabinet minister, as the story became one of the biggest political scandals of contemporary times,Porter identified himself as the accused perpetrator and wept at a press conference, denying everything.

I don’t know what I thought would happen next. That a semblance of sanity and integrity would prevail, I suppose, and Porter wouldimmediately stand aside while a confidential inquiry of some sort was conducted. The High Court conveniently presented a recent and relevant example with their inquiry into justice Dyson Heydon’s behaviour. While Kate’s devastating death meant her central testimony could not be heard or tested in person, she left behind two detailed signed and dated statements—admissible in legal proceedings under the precedent of Snyder v The Queen in the Victorian Court of Appeal (April 2021). 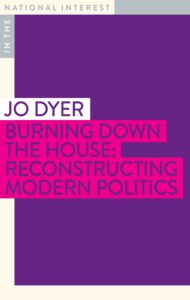 The cover of Jo Dyer’s book: Burning Down the House – Reconstructing Modern Politics.

There were also sworn affidavits from witnesses that corroborated key details in Kate’s statements and threw doubt on Porter’s dismissivecharacterisation of the nature of their relationship. As I and other friends of Kate’s became caught in a political and legal maelstrom that continues in fits and starts to this day, what I didn’t expect to happen was nothing at all. I didn’t anticipate that the only response would beuntrue statements from the Prime Minister asserting Porter’s exoneration from a police investigation that never began,33 and meaninglessrepetition of the phrase ‘the rule of law’ as he determinedly did nothing about the fact that one of his senior ministers had been accused of rape. For all the talk of listening to women, it was the voice of the indignant accused that was heard on this matter, not that of his alleged victim, from her grave.

Morrison is simply ill-equipped to handle sensitive matters relating to gendered violence. He is uncomfortable around powerful women and oblivious to, and unconcerned about, sexism and inequity. In her biography of Morrison, The Accidental Prime Minister, Annika Smethurst writes of his attitude to women that ‘broadly, he just doesn’t seem to work constructively with them’. One female Coalition frontbencher described him to Smethurst as a ‘deeply ingrained chauvinist’. Another male colleague said Morrison ‘couldn’t stand’ some of his female colleagues, including Julie Bishop and Kelly O’Dwyer. There was consensus among several government ministers that ‘Morrison simply prefers to work with other men’. When, in March 2021, the women of Australia marched in their thousands demanding justice and freedom from violence, he told parliament how lucky we were that we were not being ‘met with bullets’, as we would be elsewhere.

It’s the small things, I guess.

The disgust many women felt at the sleaze that engulfed the government showed up in a significant drop in their support in the polls, driven largely by women abandoning them.35 Confronted with potential electoral fallout, Morrison finally took note and much was made of a hastily established and snappily titled new Cabinet Taskforce on Women’s Equality, Safety, Economic Security, Health and Wellbeing, which comprised every female Cabinet minister, Morrison, Treasurer Frydenberg and, latterly and incredibly, Barnaby Joyce. At the time of thetaskforce’s formation in April, Morrison spoke volubly and emptily about its turbocharged agenda before giving the ladies a brief turn to talk.At the time of writing, it has achieved nothing. Later, the Morrison government rejected the central recommendation of the Australian HumanRights Commission’s Respect@Work report: the ‘positive duty’ clause that would give employers a legal obligation to prevent sexual discrimination and harassment in the workplace, similar to the provisions of workplace health and safety laws intended to prevent injury. We currently wait with bated breath for their response to the Set the Standard report into the workplace culture of Parliament House. They’ve assured us that they will be ‘taking action on all the recommendations,’ which is unlikely to be the same as implementing them. 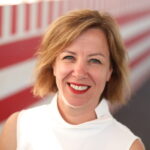 Jo Dyer is a literary curator and producer of theatre and film. Most recently Director of Adelaide Writers’ Week, Jo has held leadership roles at national cultural institutions such as Sydney Writers’ Festival, Sydney Theatre Company and Bangarra Dance Theatre. Her freelance productions have been staged at venues that include the Sydney Opera House, Brooklyn Academy of Music, the National Centre for the Performing Arts in Mumbai, and the legendary Tropicana hotel in Las Vegas, and her films have won awards and screened worldwide, notably at the Berlin International Film Festival. In 2021, Jo was unexpectedly thrust into the national spotlight when she became an advocate for her deceased friend Kate, after Kate’s accusations of rape against then attorney-general Christian Porter were posthumously made public.