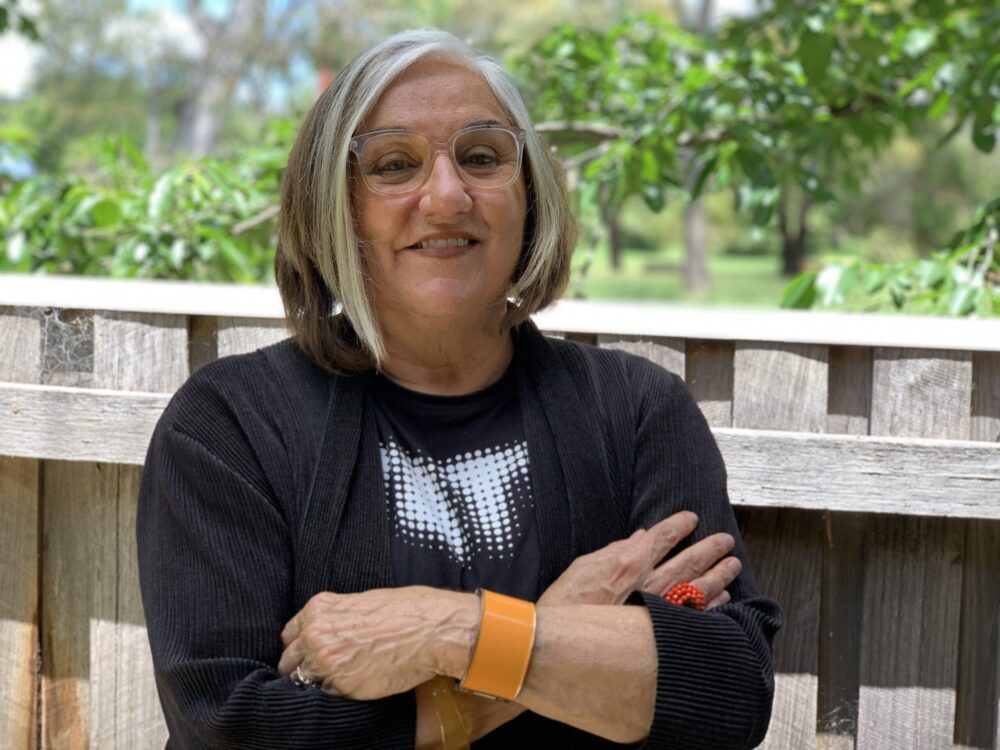 A Summer of Hope: Margo’s story

After two long years of the global COVID-19 pandemic, so many of us find ourselves tired and lacking energy for even basic tasks. Facing a new year does not fill us with the joy of possibility as it may once have done. Where, then, do we find hope?

In this uplifting summer series, Ginger Gorman talks to six extraordinary women about how they found hope in unexpected places. This series was first written for HerCanberra and is republished here with full permission.

Straight after we meet, Adjunct Professor Margo Neale, tells me her Indigenous name is “Ngawa Gurrawa.” Fittingly, it means: “Talkative but knowledgeable,” she says with a kind of nervous embarrassment. When I ask if that was a birth name, she laughs in a deep and infectious way.

“I was born way back then, when children were being taken away, before we were counted in the census or got the vote in 1967. We were not Australian citizens but considered more as part of the flora and fauna domain so kids in the so called urbanised ‘colonised south east of the continent’ didn’t get Aboriginal names, not publicly at least,” she says.

It’s a swift reminder of the unspeakable way colonisers have tried to erase Indigenous culture since Captain Cook claimed Australia as British territory in 1770.

Songlines is the blockbuster exhibition that she developed in her role as Museum’s Head of the Centre for Indigenous Knowledges. The exhibition was created in collaboration with what she terms a “community curratorium” of elders. Margo explains that these elders “approached us with and urgent plea to help them preserve their Seven Sisters songlines.”

Not long into our chat, I jokingly describe Songlines as “The Andrew Lloyd Webber of the Aboriginal World.” Why? Because it’s a global hit and is currently on tour in the UK heading for Europe, Asia and the US.

Songlines is more of an experience than an exhibition. Canberra-based Aboriginal academic and barrister Prof Mick Dodson declares it as a ‘communication portal.’ The show traverses three deserts across different states, it uses more than 300 paintings and photographs, objects, song, dance and multimedia by over 100 artists to narrate ancient stories of desire, pursuit, betrayal and family. It’s racy and compelling.

Just a few short weeks ago during the UN Climate Change Conference in Glasgow, Margo was on BBC TV  in the UK with a well-known presenter who asked her why anyone in England should care about the exhibition Songlines (currently at The Box in Plymouth).

Margo struck back with “nothing could be more relevant” and “ it is the Empire striking back.”

Margo’s message was: “You Brits came across to Australia 250 years ago to colonize and civilise [us]. Well, obviously that didn’t work. So, we’re now here to teach you how to civilise sustainably.”

“We’re still here…and it’s because of the way we live with the land. Despite the onslaught of colonialism, Indigenous values are so deeply-rooted and strong. We black fellas knew how to keep Country healthy for 60,000 years or more.” 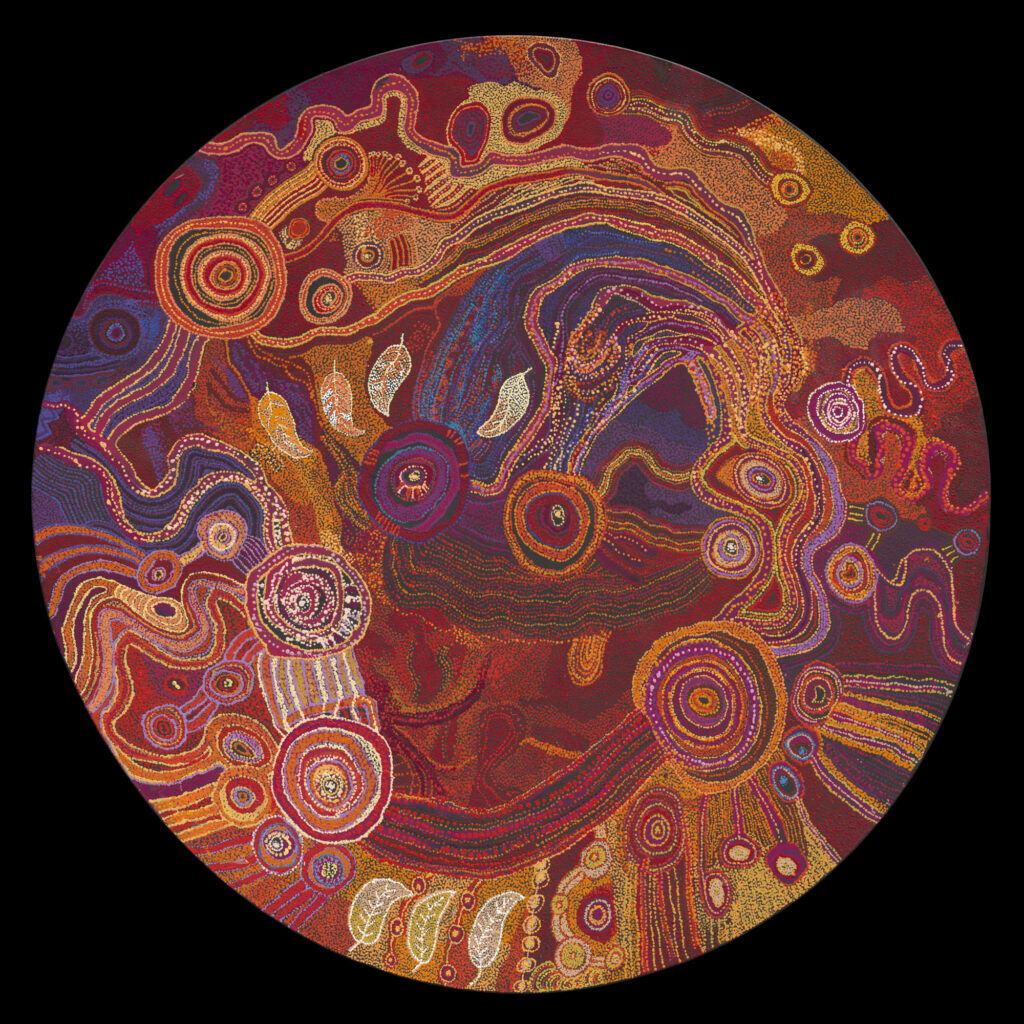 Indeed, Britain is ecstatic about the show and it’s getting so much media coverage around the world, Margo can’t keep up.

What is a songline? Margo says that for the Indigenous people of the songlines, this question is like being asked to “describe breathing.”

She explains it to others is like this: “You visualise it as corridors or pathways of knowledge that crisscross the continent, that have been laid down over millennia carrying knowledge.”

“And it connects and links natural features that tell of the creation of those sites and transmit cultural values,” she says, “All the knowledge is written in the land.”

And in terms of how the concept plays into Songlines the exhibition, “it’s the history of Australia, written by Aboriginal people recorded millennia before white man arrived. Originating from a non-text based society it’s transmitted through performance, song dance, art and all these other modes of communication.”

“And as you move through the exhibition you are walking the Seven Sisters songlines, where paintings are portals to place and sites of knowledge.  At these sites, like the places they represent in Country, you’ll learn about its creation and values  and then you’ll move on to the next site, and so on. This is Australia’s book of Genesis.”

“All ancient civilizations have epic sagas like The Odyssey and The Iliad to tell of the knowledge and truths critical for survival morally and physically it’s packaged in story because it has to be passed on and you’re not going to pass on some boring old story which no one wants to listen to.”

“So, it has to have love and loss and tragedy and obsession and all the human attributes, virtues and vices, right?”

“There are multiple layers in there that resonate with all the critical contemporary issues of the day. Aboriginal culture is always contemporary, because the values and belief systems are always being adapted to the now.”

Margo is of Irish and Indigenous descent, born and raised in Kulin Country in East Gippsland with clan connections to the Wiradjuri in the Riverina and Gumbayngirr of the Northern Rivers.

This was a country town, not a mission, so, it was dangerous to draw attention to yourselves as Aboriginal. This was a period of assimilation where mixed blood children were regularly removed from their families as her mother was,  so Margo and her three siblings weren’t allowed to talk to the neighbours and invite people home.

According to Margo, her Irish father was reminiscent of the dad in Frank McCourt’s book, Angela’s Ashes.

“He used to drink, but was likeable, charming and a big personality. But did give my mum a lot of grief as she was trying to give us kids a stable upbringing in a poor working-class household.”

“On my 16th birthday, I made my life decisions. I thought: ‘No one else is going to get us out of this working-class rut, so I have to.’ I knew then that I had to make it on my own for the sake of my family and my children.”

And she did. From there Margo went on to get a scholarship, became a teacher of many subjects including art, then moved from teaching in infant school to university and the levels in between, then into business and later an award-winning author and curator on the international stage based at the National Museum of Australia and as an Adjunct Professorship at the ANU. 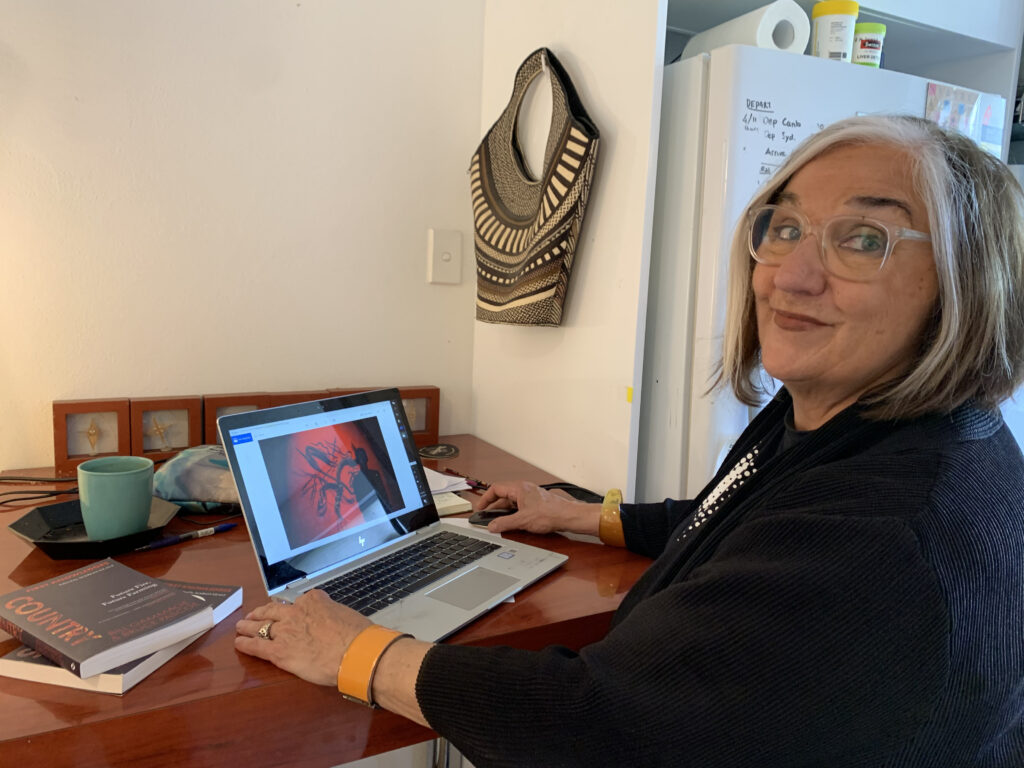 Looking back on her childhood and the racist country she grew up in, Margo notes that she already a young adult when Australia held the 1967 referendum to finally count Indigenous Australians in the census.

And with this backstory in mind, Margo looks at far we have come and feels hopeful.

“Just the fact that it’s [Songlines] so well received says a lot about how attitudes have changed. It’s seen more as: ‘My goodness, what have these fellas got to teach us?,’ rather than ‘We better put them back in their box and turn them to the white fellas’.”

The exhibition has spawned a series of First Knowledges books in areas such as architecture and design, land management, medicine, astronomy and innovation, for the general readership as well as a series for schools.

“This is more than art. It shows our integrated, enduring embodied knowledge system,” Margo says.

Thinking about both the show and the success of the books, she says: “It’s hopeful because we’ve got there. We’ve actually made it from the wings on to the stage, you know, we’ve worked so that our voices can be heard and we cannot be ignored.”

BroadAgenda is a proud partner of HerCanberra. Everything you need to know about Canberra, one destination.