The ignominious downfall of Eddie McGuire after 23 years as president of Collingwood Football Club dominated media headlines for several weeks. But while most media focused on McGuire’s own personal foibles, and provided some insight to the Melbourne ‘boys club’ and how powerful mates call on mates, Professor Jim McKay argues the celebrity hype distracted from the real issue – racism – and the value of providing a framework to change club culture.

McGuire’s demise came in the wake of the Do Better — Independent review into Collingwood Football Club’s responses to Incidents of Racism and Cultural Safety in the Workplace submitted in early December 2020, by two Indigenous professors commissioned by the club to investigate the Collingwood culture.

During a fan forum a few days later, McGuire emotionally announced he would be stepping down as president at the end of 2021. He also stated the board would be announcing significant initiatives about ensuring Collingwood was a safe and welcoming environment for everyone. But by late January 2021 the club had not responded to the Report, and only acted hastily after it was leaked to the media the day before the club’s annual general meeting. 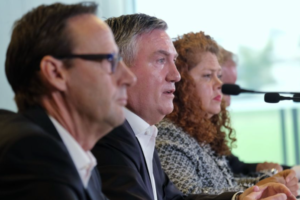 McGuire held a media conference with three board members. A key finding of the Report was Collingwood had a culture of ‘structural racism’ and the board needed ‘to drive structural change within the organisation’. This comment alone should have prompted McGuire to offer a sincere apology to the victims of racism, thank the Report’s authors, and explain how the club would implement its recommendations. Instead, McGuire initiated a cycle of hubris that lasted until he resigned a week later. He began by claiming it was a “historic and proud day” for Collingwood and then insisted he would not be resigning, because he was best placed as president to follow through on the Report.

After public condemnation and calls for his resignation, McGuire admitted at the annual general meeting that though his remarks were wrong they were caused by “the pressure of the day”, and reiterated his intention to see out the year. This only intensified community criticism and he resigned at a media conference a few days later, whilst insisting that “we are not a racist club”.

This fixation with McGuire’s personality is deeply flawed because it highlights symptoms instead of causes. McGuire’s behaviour was typical of ‘Hubris syndrome’ in the tradition of other powerful, white Australian men such as Billy Hughes, Alan Bond, Joh Bjelke-Petersen, and Tony Abbott. This self-inflicted condition occurs because men repeatedly over-estimate their abilities and ignore evidence that challenges their world views.

Concentrating on McGuire’s ‘blokey’ style also diverted attention away from the Report’s important findings and recommendations. For instance, McGuire was President during what the Report called a ‘consistent pattern’ of Collingwood failing ‘to adequately address incidents when they have arisen’.

Instead of using the opportunity presented by the Report’s release to educate Australians about the dehumanising effects of systemic racism, mainstream media engaged in what some Indigenous leaders called a “sideshow” about McGuire. This flippant coverage was epitomised in a headline about his first meltdown: ‘Eddie’s heartbreak.’

Initially, McGuire resisted pressure to resign voluntarily. Eventually he was ousted by a strong show of resistance from an array of Indigenous and non-Indigenous individuals and groups, including Collingwood fans and players. They did what McGuire seemed unwilling, or perhaps unable, to do – apologise sincerely and show support and empathy for the victims of the club’s systemic racism.

After McGuire’s departure the board responded to the Report by establishing an Expert Group on Anti-Racism. Yawuru woman Taryn Lee was appointed a strategic advisor and will report to Collingwood’s CEO on the implementation of all 18 recommendations. Twelve advisors have been appointed to the Group. All the appointees have a wealth of experience in implementing policies on diversity, inclusion and reconciliation. This framework for change has the potential to provide strong models of leadership for the rest of the AFL and sport governance in general.

Two months after delivering ‘Do Better’ the report’s authors reflected on their study. They emphasised everyone can play a role in changing systemic racism. Moreover this change is ‘not about political correctness but basic compliance with legal standards of anti-discrimination required by employers’. Their comments apply to the whole of Australia and also have some salient implications for our sports-mad Prime Minister.

Professor Jim McKay is an Honorary Senior Research Fellow with the Institute for Advanced Studies in the Humanities at The University of Queensland. He has published widely on topics such as gender, race, nationalism, globalisation and popular culture.