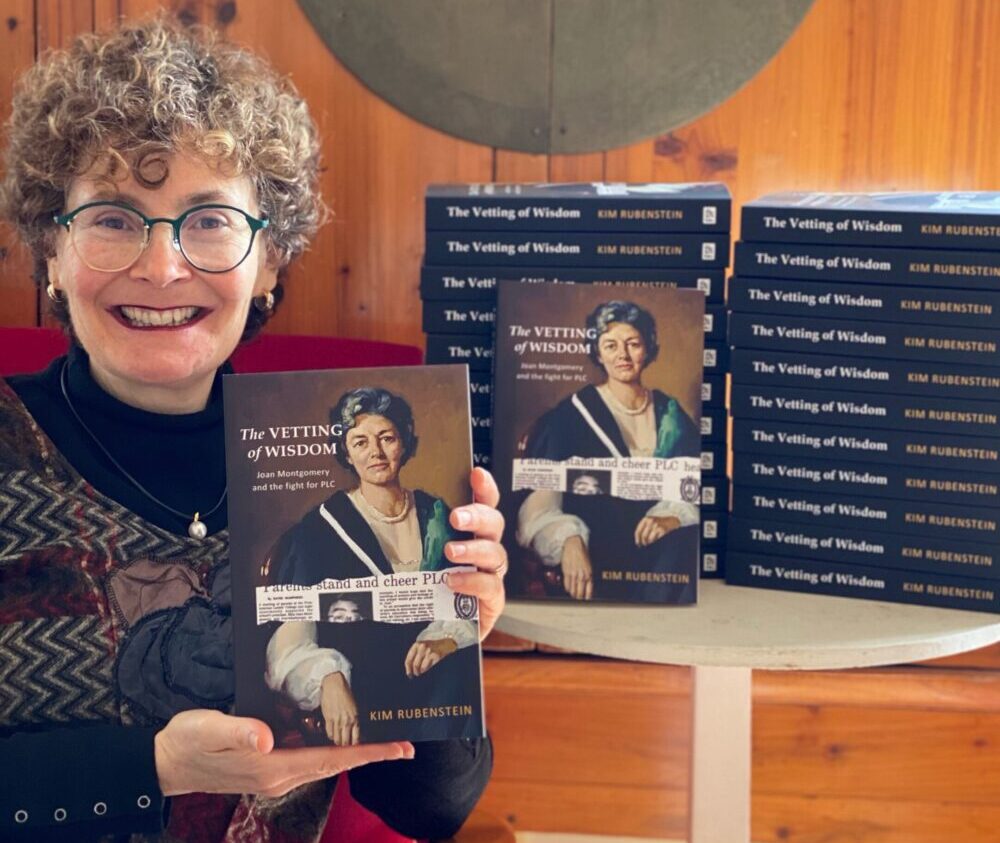 The Vetting of Wisdom is the gripping true story of revered Principal Joan Montgomery —acclaimed nationwide as the leading girls’ school educator of her day—being assailed by a Presbyterian Church minority hell-bent on her dismissal and returning PLC to ‘bible-centred’ education. For author Kim Rubenstein, PLC alumna, Joan’s fall was her first experience of power triumphing over reason.  In this book, she intricately pieces together the puzzle of what made Montgomery such an inspiring role model and what led her detractors to think otherwise. What follows is an extract, re-printed with permission.

Wednesday 7 May 1980. It’s a mild late autumn day in Melbourne but in the inner eastern suburb of Burwood a storm is about to break, one that has been gathering for more than a decade.

It arrives at 1.45 p.m., announced by the heavy stride of Frederick Maxwell Bradshaw down the long corridor from the main entrance of Presbyterian Ladies’ College towards the office of the Principal. Max Bradshaw is a man, in his own conviction, on a mission from God. His critics, whose ranks are about to swell, paint him as a calculating and ruthless zealot.

Those close to him revere a devout layman with, as one will say, “a steadfast industry in doing good with the skills which God had given him.”

A few months shy of his 70th birthday, Bradshaw is thick-set, short of breath and has failing eyesight. Yet he still cuts a formidable figure. He is a leading barrister, a legal text-book writer, a historian and soon to be vice chair of the Scotch College Council.

More than this, he is one of the most powerful men in the Presbyterian Church of Australia, and one of its most driven advocates of doctrinal orthodoxy. Appointed the Church’s Procurator, or chief legal officer, in 1959, he drafted the 1953 Act of Parliament which enabled the union of the three congregations of the Free Presbyterian Church of Victoria.

That, however, would prove the limit of his appetite for church union. On this day, on a mission to impose his legal and moral will on the future of one of Australia’s most celebrated girls’ schools, Bradshaw is flanked by the younger, taller and fitter figure of the Very Reverend Ted Pearsons.

At 43, Pearsons is Clerk of the General Assembly of the Presbyterian Church of Victoria, a position he will hold for a record 32 years. He is also in awe of Bradshaw, his mentor. “I was more like a son to him,” Pearsons would say.

The two men reach the office, a floor above the school tuck shop, at 1.50pm and are promptly ushered in by the secretary. The Principal, Joan Montgomery, has been awaiting this moment for several years. After 11 years as head of PLC, the school she first attended as a student in the 1930s, Joan Mitchell Montgomery enjoys a reputation as one of Australia’s eminent educators.

She is president of the Association of Heads of Independent Girls’ Schools of Australia and will drive its merger with the equivalent association of independent headmasters. She is an Officer of the Order of the British Empire and will become a Member of the Order of Australia for her services to education. And, most of all, she is loved and revered by generations of students and parents as an exemplary leader and a warm and compassionate woman.

For the meeting with Bradshaw and Pearsons, Montgomery is joined by her deputies, Evelyn Tindale and Jan Douglas. All three will later file separate notes of the conversation.

The formalities of arrival complete, Bradshaw begins with what he calls a proposition for Joan Montgomery but what effectively is a notice of her dismissal: “Given your (employment) agreement has five years to run, we suggest you seek independent legal advice on your agreement with the Trusts Corporation of the Presbyterian Church of Victoria.”

Joan will respond calmly but firmly that her advice is clear: her employment contract transcends the upheaval that has riven the Presbyterian community and stands. But the end of her tenure as PLC Principal and her outstanding career is now only a matter of time.

Through Kim’s own eyes

I was 14 on the fateful afternoon of Wednesday 7 May 1980 when Max Bradshaw and the Reverend Ted Pearsons called on Joan Montgomery hoping to induce her early retirement.

I was sitting as a Year 10 student in a nearby classroom, one of more than a thousand other girls at the school that day. But we had absolutely no idea of the meeting or of any of the machinations of the Camberwell Assembly and their wish to see our revered school head removed.

Indeed, not only did we miss the opening skirmish in what was to become a five-year battle over control of PLC but, due to Joan Montgomery’s extraordinary composure, the unfolding conflict was kept well away from us. Remarkably, even though I had met with Miss Montgomery on a daily basis as School Captain in 1982, I learned nothing directly of the unfolding school drama that had been set in motion on that day in May 1980.

My personal history at the school had obscured from me the possibility that PLC’s creed of female empowerment and religious ecumenism could be thwarted by narrow dogma with a sting of patriarchy and even, as I later learnt, a shot of long-remembered personal animus.

For Max Bradshaw and Joan Montgomery had scrapped in much earlier days and Bradshaw had long nursed the perceived slight of Joan’s spirited independence. My own journey at PLC began in Year 4 as a nine-year-old transferring from Mt Scopus Memorial College, a four-minute drive up Burwood Highway.

It was my mother, Sue, who sensed the opportunity PLC offered, recognising it as the school for girls. She was an MLC girl. My father, Leigh, went to Melbourne High. Both mixed easily with people from all backgrounds, cultures and religions and they were keen for their daughters, me and my younger sister Elana, to do the same.

It was part of PLC and Joan Montgomery’s Old Testament welcoming of strangers that no-one batted an eyelid at the Jewish girl from Scopus. The PLC that I attended was a roomy place encouraging of faith and religious diversity. 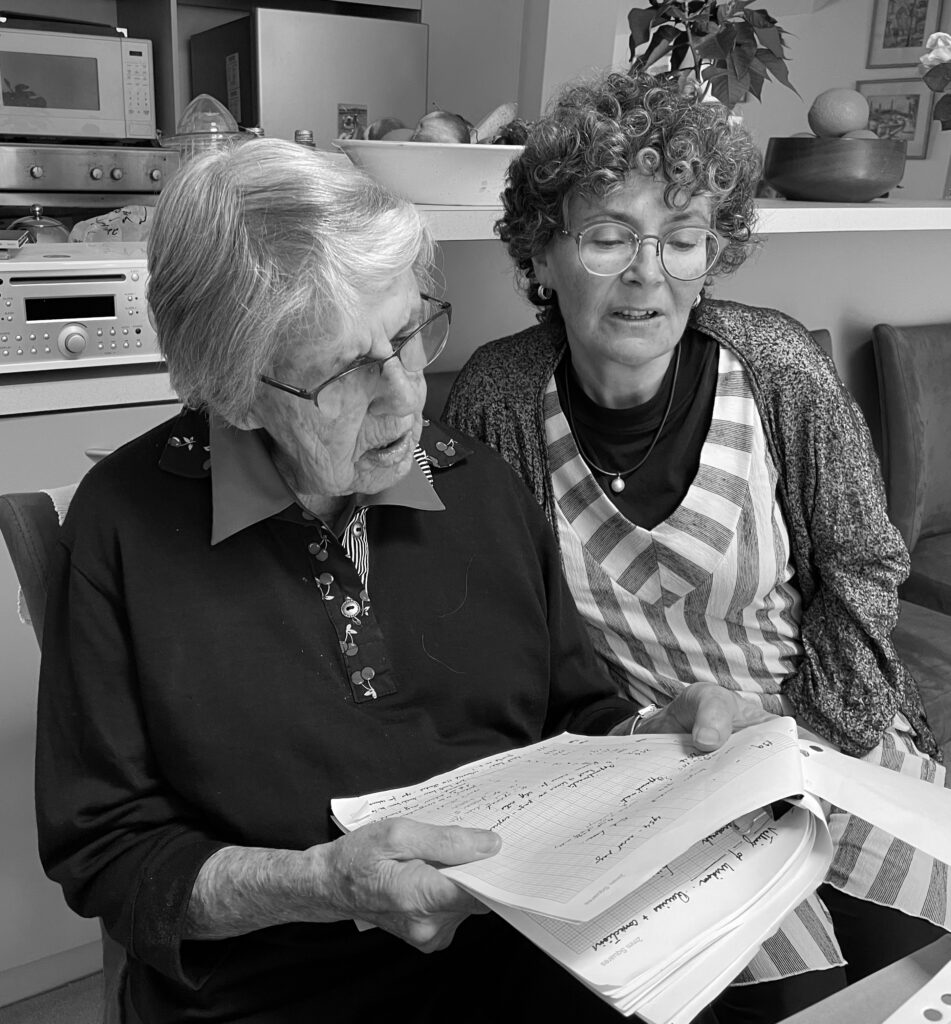 Joan Montgomery, left, with Kim Rubenstein as they review historical material for the book.

Judaism and Presbyterianism have a shared history and not by accident did Joan the student choose an Old Testament prophet as the subject of her prize-winning Bible essay in 1942. The two traditions have the same genesis, were aboard the same ark and afloat on the fundamental cultural raft of education, so highly prized in Jewish and Presbyterian communities.

PLC’s ecumenical ethos was embodied and shaped by Joan Montgomery. Each year, the Parents’ Association gave every Year-12 girl a Bible on leaving PLC—a valedictory Testament. They were presented at a school assembly before speech night. I noticed, however, that my copy was different, a Sinai Publishing House version, printed in Israel in 1977.

Yet, importantly, it shared the same bookplate as all the others—the PLC crest ‘Lex Dei Vitae Lampus’ (the law of God is the lamp of life) on the inside cover and underneath the inscribed emblem: “Presented by Senior School Parents’ Association, Combined Women’s Groups.”

How did this come about? Well, Joan had driven to a Jewish bookstore in Acland St, St Kilda, and bought a Tanach, the Hebrew Bible, rather than give me the Christian version. It was a moving gesture and, during my years practising law, I would lift this Bible to swear affidavits, knowing that it was unique — a burning light that would not go out.

The Tanach is central to orthodox Jewish practice; the Bible to understanding the Presbyterian Church. The Church’s approach to it distinguishes Presbyterianism from other Christian denominations and this was part of the reason for the Presbyterian schism during the formation of the Uniting Church in Australia.

As a Jewish student and an elected School Captain, my own position may have been emblematic of what the Continuing Presbyterians thought was wrong with PLC. In their view, it had veered too far from a strict orthodoxy and narrow scriptural reading of the Bible and was overly concerned with producing well-rounded girls ready for university and for taking their place alongside men in the professions and leadership positions ahead.

There is no doubt that the complex history of Presbyterianism and the beliefs and practices of the Continuing Presbyterians and the Camberwell Assembly were critical to the story of Joan Montgomery and the fight for PLC. Yet broadly the saga is reducible to an alliterative formula—power, patriarchy, property and, perhaps critically, personality. Indeed, force of personality, in particular the personality, character and zealous convictions of Max Bradshaw may be the key, the one factor making the critical difference and without which and whom the story would have ended differently.

For me, as for so many, Joan Montgomery was an inspiration, and it was unfathomable why anyone would seek to curtail her tenure as PLC’s head. Max Bradshaw saw things differently.

The Vetting of Wisdom is out now. Buy it here. 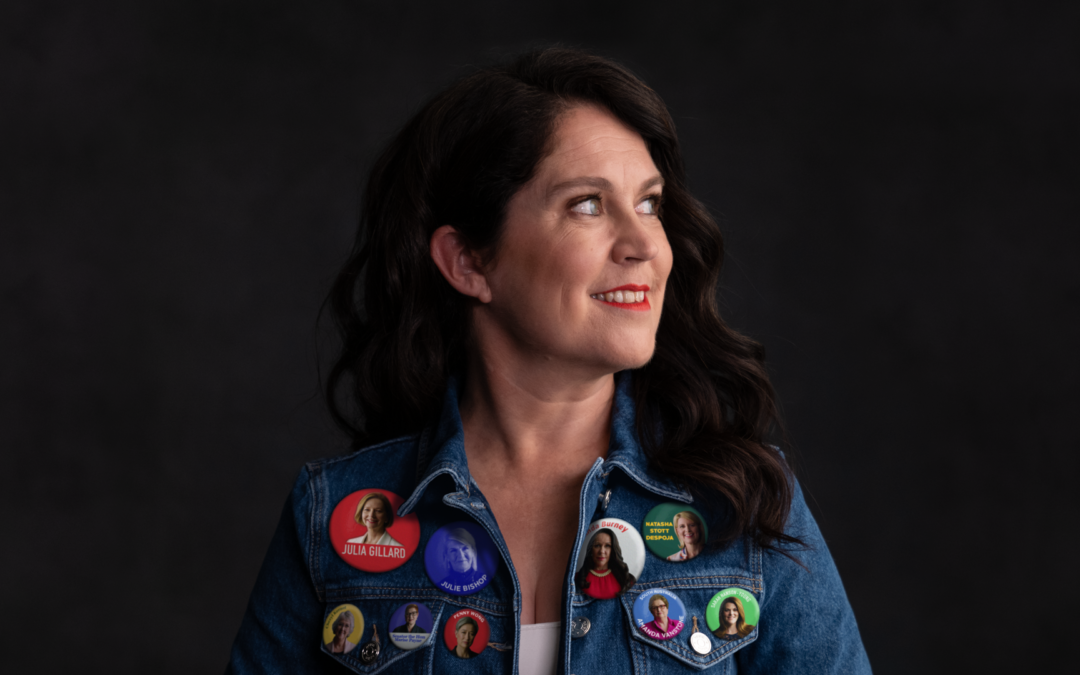 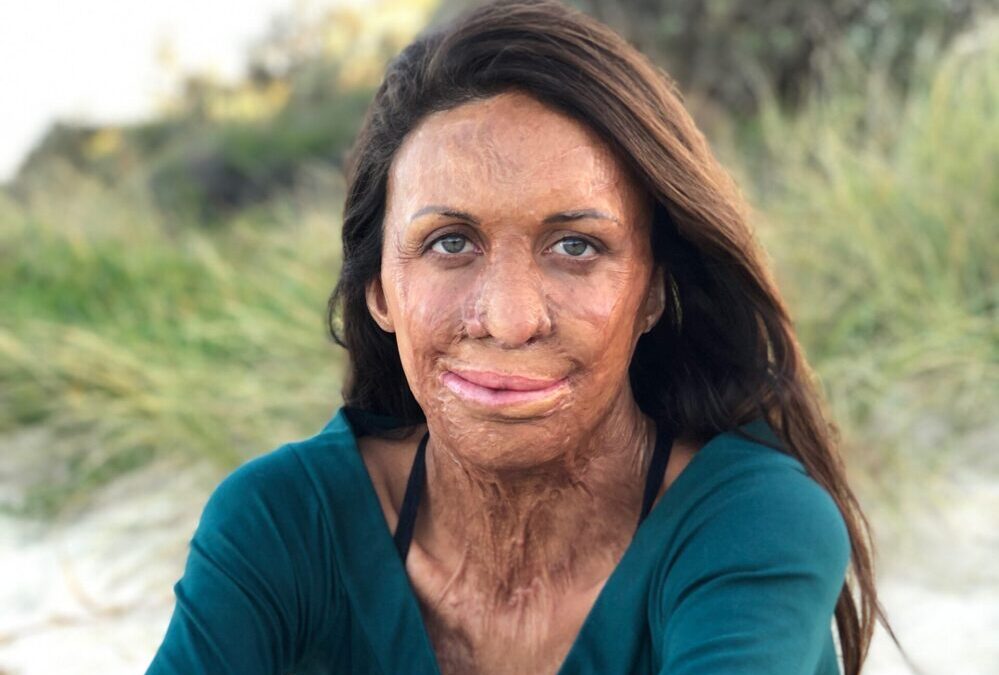 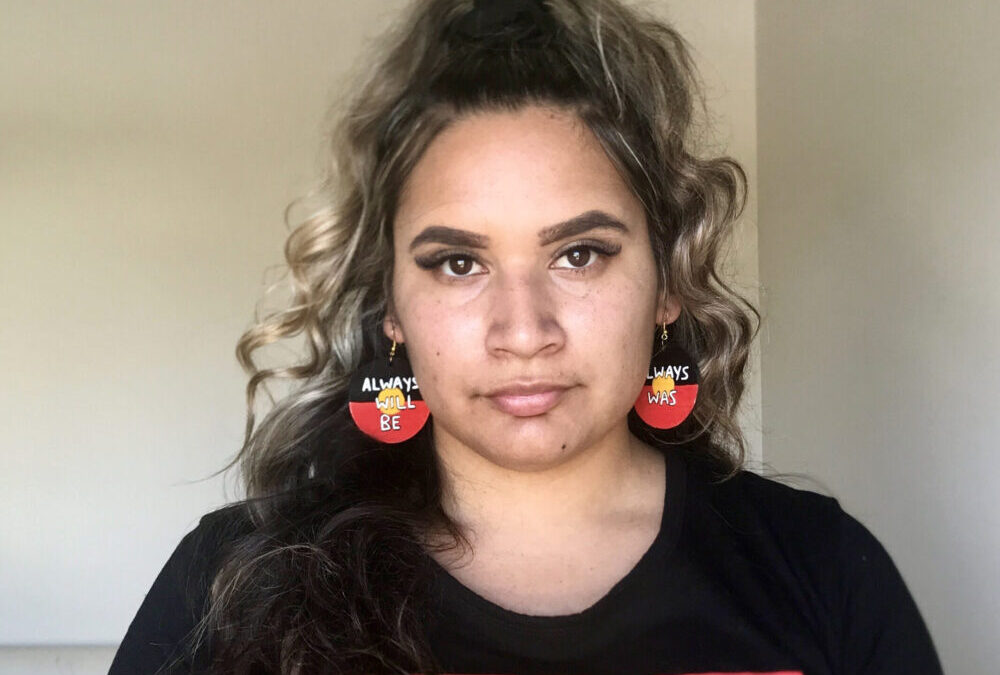