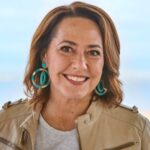 What follows is an extract of Lisa Millar’s new book, Daring to Fly: The TV star on facing fear and finding joy on a deadline. It’s a story about a girl from country Queensland who found a way to conquer fear, to see (and report on) trauma and horror, while still holding on to joy.

I never expected trauma and fear would be the dominant themes of my working life. The trauma was something I experienced second-hand, as a witness to the aftermath of school shootings, earthquakes and suicide bombings. The fear of flying I suffered from was very much a personal battle that lasted a little over a decade. But both are intrinsically linked.

I’d spent two weeks waiting outside Changi Prison in December 2005 for the young Australian Van Nguyen, caught trafficking drugs, to be hanged. It had left a mark. When I got home the ABC was just beginning to investigate a new way of helping staff.

I was flown down to Sydney to be a guinea pig in a focus group early in the new year.A psychologist stood at the front, gauging whether this exercise was going to be a lost cause with the hardened journalists in the room that day who’d spent years in the field. Her name was Cait McMahon and she ran the Asia–Pacific branch of an international organisation called the Dart Centre for Journalism and Trauma, a group none of us had heard of.

When Cait began talking about the impact long-term trauma could have, one seasoned war reporter who’d spent the previous few years in and out of Iraq and Afghanistan, sat with folded arms and an expression on his face that read ‘what would you fucking know?’.

‘Daring to Fly’ is Lisa Millar’s new book about finding courage and joy.

Cait was convinced trauma was misunderstood by media organisations. The statistics were clear about the damage that could be done. Substance abuse and broken relationships were more common among people in the media than they should be. She saw it as a problem that could impact on the freedom of the press. ‘Trauma silences people. It silences societies, individuals, communities.

‘If a journalist is so traumatised and so burned out by what they’ve been exposed to professionally and can no longer work, or chooses not to work because they’d just have to go and do flower shows because there’s been too much of the dose of trauma, they are silenced as much as someone like Peter Greste who was physically silenced when he was jailed in Egypt.’

It reminded me of my time at The Sun in Brisbane in the early 1990s, when I worked on police rounds. I used to ring police stations around Queensland to see what had happened overnight and then meet up with a photographer at whatever fire, death, murder or kidnap had happened within driving distance to carry out a ‘death knock’. It didn’t always involve a death but it did involve knocking on a victim’s door and speaking to them or the grieving family.

I was twenty-one years old and would be lying to say it wasn’t confronting. The photographer was an old hand at it, a middle-aged man with a sensitive heart who indulged in black humour on the way to an assignment to alleviate the stress. One day we were sent to Ipswich, about forty minutes west of Brisbane.

The paper had been following the case of a missing 22-year-old woman. I’d written a front-page story the day before about the discovery of her broken-down and abandoned car. She’d rung Queensland’s roadside assistance company RACQ at 8.30 pm from a public phone box a four-minute walk away. And then disappeared without a trace.

Twenty-seven hours later police had found her, questioned her and sent her home. Police believed she’d been abducted and held captive. My job was to get her story.

We had no idea what this woman had gone through as a captive and, as we drove out on that winter’s morning before dawn, we discussed our tactics. The photographer kindly said he’d be happy to back me up if I told the bosses that we’d knocked and no one responded. They called that a ‘grass knock’ because no one would hear it. But I knew I couldn’t carry off a lie like that and so we sat and waited in the winter fog, cursing that we hadn’t brought food as the temperature barely climbed past zero.

Finally, a light went on and someone picked up a newspaper off the lawn. The house was awake. We walked up the wooden steps of the old Queenslander and only a few seconds after I knocked the door opened. The face that peered out belonged to a young woman. It was bruised and her eyes flickered as she tried to process who these early visitors were.

Blame the cold, hunger or shock but the last thing I remembered was introducing myself to her before I fainted. When I came to, I was inside the house and she was offering me a glass of water. I pleaded with her to give me a few lines for a story, which she did, as long as we didn’t take her photo. She told me she’d been taken from her car on the highway and kept in a dark room with a bucket for a toilet.

We rushed off to find a public telephone. I inserted twenty-cent coins into the phone to connect to the paper’s copy-takers, who would type my dictated story into the system. By the time we got back to the office, the paper was hitting the streets and my story and the photo was the front-page splash.

When I walked in, one of the senior editors started applauding and others joined in. He handed me a cardboard cut-out of an Oscar that they’d dummied up which read ‘For Best Acting, Lisa Millar’. It struck me that they thought I’d deliberately fainted to get the interview. And they were proud of me.

Years later, when the ABC began training staff to become more trauma literate – in not only the way we looked after ourselves but how we treated those we reported on – it was the start of an eye opening journey.