Content Notification: This article discusses sexual violence and harassment. It does not have any descriptions.

What is sexual violence and harassment?

However, while it is true that all women and girls can experience sexual violence, women and girls who face other forms of inequality can be at heightened risk. For example, Aboriginal and Torres Strait Islander women and women with disabilities have high rates of sexual violence and harassment but the research is often limited or culturally inappropriate. To date, the research has been limited for LGBTIQ+ communities, though this is changing.

What is Primary Prevention

While responding to sexual violence and harassment is important, to address the root causes we need what is called primary prevention. The peak body Our Watch, in their landmark report Change the Story describe primary prevention as “whole-of-population initiatives that address the primary (“first” or underlying) drivers of violence”. What this means is a shift from responding to sexual violence and harassment to figuring out what causes it and how to stop it before it starts. 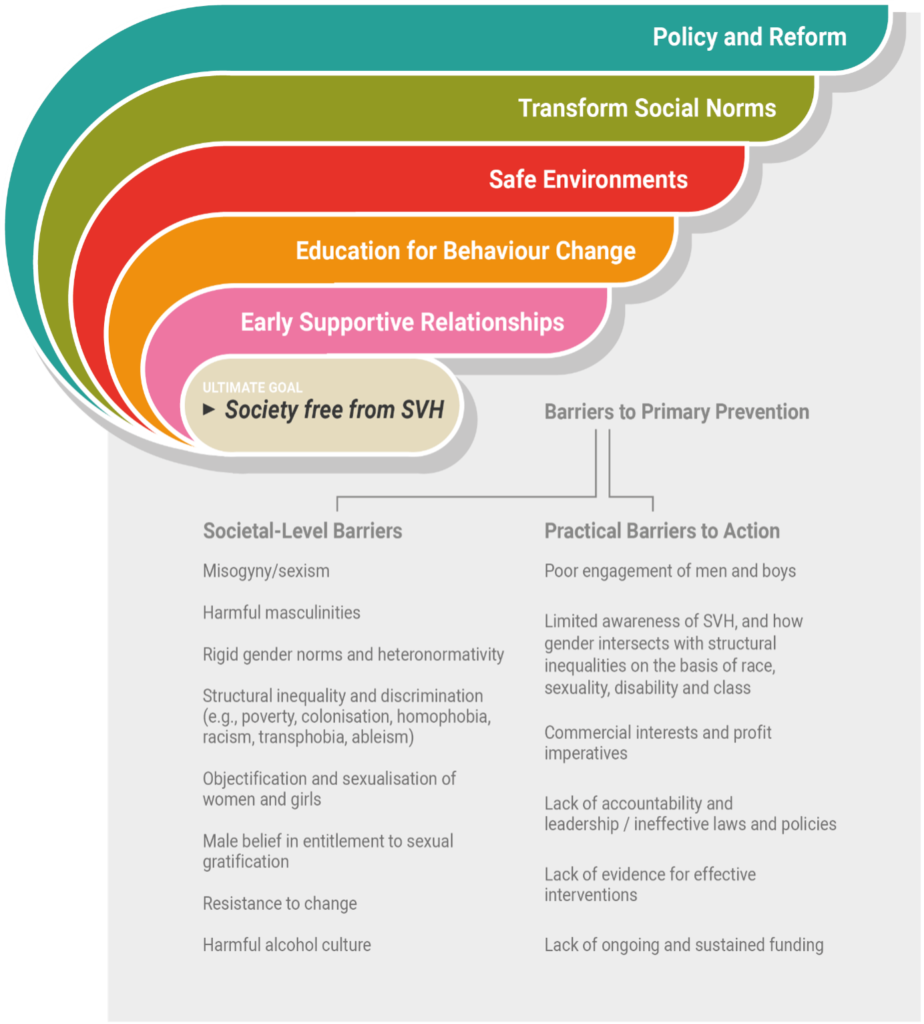 What did we do?

The Commonwealth Department of Social Services commissioned us to firstly research what sexual violence and harassment primary prevention interventions currently exist, specifically for women and girls. We also analysed data from the 6th National Survey of Australian Secondary Students and Sexual Health.

Secondly, we undertook consultations with organisations, peak bodies and individuals across a broad range of sectors, to discuss key issues relating to sexual assault and harassment in Australia. We consulted with sexual violence services, including 111 people – from counsellors to researchers and advocates to businesses and identified priority prevention strategies.

Armed with both the research and the consultations, we built a Theory of Change (see diagram), or a roadmap, for the primary prevention of sexual violence and harassment in Australia.

What did we find?

We found very few successful primary prevention programs specifically targeting sexual violence and harassment. Most of the programs we found were for university students in the USA. The programs were generalised with little specific targeted programs for at risk groups nor for perpetrators. In particular, there were no successful programs aimed at men and boys.

Our analysis of the sixth National Survey of Australian Secondary Students and Sexual Health found that almost one-third of participants had experienced an unwanted sexual event in their lifetime. Those more likely to report having had unwanted sex were female, trans and gender diverse and non-heterosexual young people.

We also found few programs focused on alcohol. Yet we know that alcohol is a significant factor in the perpetration of sexual violence and harassment.

What needs to happen?

Firstly, all approaches must be intersectional. That means, they need to include diverse voices and experiences. We also note that at the Women’s Safety Summit, Aboriginal and Torres Strait Islander community representatives called for a specific national plan. We also made similar recommendations after feedback from our consultations. Also, LGBTQ+ communities asked for further inclusion, which is mirrored in our findings.

To address sexual violence and harassment, we identified 5 key areas:

Early supportive relationships: Sexual violence and harassment start early in life, with one in five Australian girls and one in 25 boys sexually abused before they turn 15 years. Preventing this violence means early childhood relationships with parents, caregivers and other family members need to be supported. Also, this means addressing structural disadvantage such as employment, education and housing. In the long term, supporting families/parents or caregivers and addressing social inequities can improve social cohesion, which is an important primary prevention aim.

Education for behaviour change: Education is a key area for primary prevention. This means more than just sporadic lessons about consent in high schools. Education needs to start early, and it should promote gender equality, healthy masculinities and safe and respectful relationships among young people. This must include age-appropriate sex education, affirmative consent, critical literacy of media and technology including pornography, and it must include diverse experiences.

Transform social norms: Social norms are the broad attitudes and cultures within society that condone all forms of violence against women, including sexual violence and harassment. We found that building strong and inclusive social movements that can facilitate men’s engagement as allies, enhance women, trans and gender diverse people’s voices and social activism will sustain change.

You can read the Evidence Review and Theory of Change on the DSS Women’s Safety website.

Dr Leesa Hooker is a nurse/midwife academic and Senior Research Fellow at the Judith Lumley Centre-La Trobe University, leading the Child, Family and Community Health nursing research stream within the Centre. She has established expertise in the epidemiology of family violence, women’s mental and reproductive health and parenting.