Davos 2021: the female voice in a global forum

The World Economic Forum’s Davos 2021 meeting went virtual in January, with over 2,000 invited participants from around the world meeting online. Hunkered down in her bedroom in Canberra, 26 year old Ash Streeter-Jones joined them every night for a week in the wee dark hours, when the rest of us were asleep.

As the youngest ever ACT Woman of the Year, and founder of Raise Our Voice Australia, Ash’s extraordinary CV as a feminist activist and youth advocate has already seen her win numerous awards and accolades, including being named one of Forbes Magazine’s global ’30 Under 30’ leaders to watch, as well as a Financial Review Woman of Influence. Ash has also presented at a number of global fora including CSW at the UN. But it was her recent invitation to participate at Davos that set a new bar. BroadAgenda asked Ash to share her reflection on what that experience meant to her and what she learnt.

After participating in Davos at the World Economic Forum, I’ve never been so convinced that we need more young women on the international stage.

Two weeks ago I had the opportunity of a lifetime: I was selected as one of 50 young global leaders to participate in Davos at the World Economic Forum. When the email came through, I had to check it was real.

To have the opportunity to participate in a forum like Davos is phenomenal. Why? Well, meetings such as Davos bring together global leaders from across the public and private sectors, along with civil society, to consider some of the world’s most pressing challenges. From 6pm to 6am, I was given the opportunity to participate in discussions ranging from geopolitics, to climate, the economy, to stakeholder capitalism, and the importance of public-private partnerships as a tool for change. I was also given the opportunity to network with some of our pre-eminent global leaders.

As we consider our recovery from COVID-19, it would be remiss of leaders not to acknowledge the adverse impact the crisis has had on women and young people – even more so for women and young people of colour. While discussions noted that COVID-19 didn’t necessarily cause new problems, it was well acknowledged that the crisis has exacerbated many existing inequalities. In short, it compounded a world that wasn’t working for young women: a world in which young women remain more likely to be the victims of sexual and domestic violence; are less likely to be represented in leadership and formal decision making; and in which young women continue to experience compounded discrimination due to their age, and gender.

So, why was it critical for young women to be at the table? 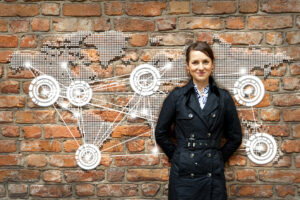 I’m a big believer in co-design, the principle of “no decisions about us without us”. If we’re genuinely interested in solving the complex issues of inequity, aren’t those people experiencing the problem first hand best placed to inform us of the nature of the problem and how it directly impacts their lives? This reflects another reality: the majority of global leaders are older, white men –  a group which is less likely to experience the problems they’re designing the solutions for.

During 2020, men were less likely to lose their jobs or hours of employment compared to women. They were less likely to have significantly increased caring responsibilities (including child care, home schooling and caring for elderly relatives), and while they were more likely to experience severe virus symptoms, they are also more likely to be employed in the sectors and industries which are most heavily supported to bounce back quickly as part of the economic recovery.

Adverse impacts of COVID-19 aside, young women – like young men – are custodians of the future, and yet young women are the least likely to be heard in decision making forums. Crises like COVID-19 send the world into flux, and with this, we have an opportunity to consider the future world we want to create. Critical challenges such as the climate crisis, including the need for urgent public and private leadership in ensuring climate mitigation and adaptation, can be considered differently across generations – particularly as crises impact young people differently. Young people bring new perspectives to old challenges and, thanks to social media, have never had as much information immediately available to them as they currently do.

At the Davos forum we spent a total of sixty hours online, engaged in a huge range of  sessions. The topics under discussion included the unequal impacts of COVID-19 on women, young people, people of colour and people in poverty; to the already-present climate crisis which similarly has an adverse impact on those in poorer countries, women and young people; to the need for an equitable recovery which redistributes resources and resets our economies, political decision making and resourcing to support those who are left on the margins of the developed world, and those nations with less resourcing.

We also discussed  the global decline in trust in Governments, and the tension between populations which distrust the very people who are tasked with crisis response and recovery.

More than anything, Davos left me with an important question – what future are we aspiring to? Who is responsible for creating it? And what tools do we have in our toolkit? Arguably, we all have a responsibility. After all, it’s our collective future.

The incredibly stimulating experience left me feeling invigorated to further push forward with my Global Shapers Canberra cohort, the World Economic Forum movement for young leaders, and my organisation, Raise Our Voice Australia. The latter which was established to support the next generation of female and non-binary public policy leaders from all backgrounds. It aims to adopt both a bottom up and top down approach to slowly and surely create the change we want to see.

As a result of attending Davos I feel validated in my mission to help build a better ‘normal’. As a result of  following various Davos discussions on the power of public policy, I am now feeling even more confident in the tool I’ve chosen. I’m pleased to belong to a community of people who are passionate about making change, and I remain hopeful that we’re moving in the right direction.

But, we do have work to do! I’ve never been so sure of the need to uplift marginalised voices, particularly young women, than I am right now.

Ashleigh Steeter-Jones is founder of Raise Our Voice Australia, an initiative to boost the number of diverse young female and non-binary voices in public decision making. She was 2017 ACT Woman of the Year, and is currently Vice-President of YWCA Canberra and Deputy Curator of the Canberra Global Shapers Hub.