Commission on the Status of Women – who is left out of the digital frame?

Every month is busy for feminist advocates and activists. The work never stops. But the month of March is when the rest of the world, along with mainstream media, turn fleeting attention to gender equality.

That brief period between International Women’s Day on March 8, and the United Nations’ annual Commission on the Status of Women (CSW), 15-26 March, provide a short window of opportunity for women to be heard.

But the question we must ask is – who are we not hearing? Whose stories are left out? 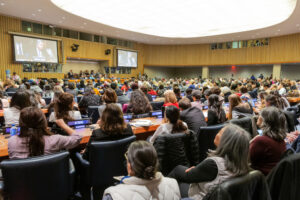 The CSW takes place in New York, where all member states of the United Nations gather to report on their gender equality progress. It’s a time of public sharing, in which civil society get to hold nations to account.

This year the theme of CSW65 is women’s participation and decision making in public life, as well as the elimination of violence, for achieving gender equality and the empowerment of all women and girls.

In the CSW official document released on 21 December 2020, the UN Secretary General notes the importance of women’s participation in decision making and leadership. It highlights a focus on parliaments, public sector and the need to strengthen quotas.  The Beijing Declaration and Platform for Action on Gender Equality, written at the 4th World Conference on Women in 1995, made clear that women gaining equal access to decision making and power sharing was a critical strategy for achieving equality for women and girls. It is also critical for reaching the Sustainable Development Goals. However, the UN Secretary General also notes that women’s civil society, which is crucial in supporting change, is challenged by shrinking spaces.

Whilst Civil Society always plays an important role advising government delegations at CSW, as well as participating in numerous influential ‘side events’ and parallel sessions, this year will be different, as some of those critical voices are muted.

Due to COVID19, CSW will be a hybrid event with mostly virtual meetings. Whilst this means that some who could not otherwise afford to attend can now participate, it nevertheless relies on access to internet and widens the digital divide.

After a year of zoom meetings most of us know how hard it can be at times to get a word in, particularly when there are multiple people online. Coupled with time differences in New York, which mean ungodly hours in the middle of the night for many of us, there is a real risk that CSW 2021 will become just a passing parade of faces and voices, rather than a participatory and networking experience.

Importantly, just as those of us in the Australia/Oceania region will skip out of the 4am AEST meetings, the flip side means much of the world will not have the benefit of joining in the Pacific-led sessions

The paper details the regional mobilisation is Eastern Europe, Western Europe, Middle East and North Africa, Sub Saharan Africa, Latin America and the Caribbean,  South and East Asia. However, neither the regional wrap up, nor the detailed map, include any Pacific Island Countries. This is a significant oversight. The reality is that far from a decrease in feminist civil society activity, it is in fact increasing – mobilising, forging new coalitions and combining resources. 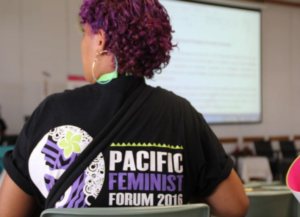 The We Rise Coalition is just one example of organised feminist activism and leadership in the Pacific. The We Rise coalition continues to grow in number.  It is one of the key actors in the region advocating for gender justice for Pacific women in all their diversities. It facilitates a regional dialogue between individuals and organisations with different constituencies across the region, through a focus on knowledge-building; it builds capacity of Pacific feminists to conduct their own research, movement building and advocacy; and coordinates a representative feminist voice for regional and global meetings. The commitment to a focus on intersectionality and intersectional recognition of diverse Pacific women’s struggles, increases their effectiveness and helps ensure no-one’s voice is left out.

The Expert Group recommends to the UN that transnational feminist organisations and networks are strengthened by convening global and regional meetings on gender equality, and argues that a ‘far more powerful and accessible CSW is needed’.  Barriers to civil society participation at CSW are not new, and not COVID specific. Visa restrictions have also kept civil society away in years past.

Right now, preparations are taking place for the CSW65 by Pacific feminists, who want to amplify their voices and let the world know of their issues and concerns. This March many will be watching to see if the virtual meeting model makes CSW more accessible – particularly for those far from New York. Or, will the realities around technological access and poor internet coverage make the digital divide a bridge too far, with existing inequalities and marginalisation simply further entrenched.

Pacific feminist activists are in for the long haul. They are seeking substantial, sustainable changes. Their efforts deserve much more than a fleeting spotlight, during a brief and jam-packed period, when the world might watch for a moment – if awake.