In the 1970s and 80s, academics theorised that building a critical mass of women in Parliaments would result in culture change, accelerating progress towards gender equality. The magic number was said to be 30% female representation; at this point it was assumed that change would flow naturally as female voices and power increased. ‘If you elect them’, the theory said, ‘change will happen’.

For the first time in Australian history, the majority of Federal Senators are women, and in the House of Representatives 30.5% of seats are filled by women. We are slowly closing on in on 50% representation across federal parliament, and yet it’s clear that our political culture is as misogynistic as ever. It seems that sheer numbers of women in parliament are not enough to change the unconscious biases which underpin parliamentary culture in this country. We obviously need something more.

Women are made invisible by the social and political structures which dominate the lives of parliamentarians and their employees. This invisibility problem is well known – it’s a well-established principle that a women in parliament needs to become one of the boys to be allowed ‘in’.

The last two weeks have provided a stark lesson in the invisibility problem. Watching the PM struggle to understand the need for action in response to the courageous disclosures by Brittany Higgins was a particularly good example. The fact that Ms Higgins was a junior colleague in the same workplace was not enough to goad the PM to action – he couldn’t ‘see’ her situation until his wife suggested he suggested he replace Ms Higgins in his mind with one of his own daughters. Taking Ms Higgins out of her parliamentary role and recasting her in the patriarchally acceptable role of daughter appeared to do the trick – she became suddenly visible to the PM and the need for action became clear. But the PM is far from being alone in this – this is a problem which stretches across all sides of parliament, throughout the political labour force and out into the very business of government itself.

Australia’s federal systems for developing policy render women’s lives invisible. When the budget was handed down in October 2020, there was a swift and widespread chorus of concern that the budget contained no analysis of the effects of its measures on women. The Government reacted with some bewilderment to the call for a gender aware approach to budgeting – after all, the budget had been accompanied by a Women’s Economic Security Statement which set out funding allocated specifically to address barriers faced by women. There was a distinct sense from Government that this should have been enough of a focus on women. The idea that Government should consider how the rest of the budget might affect women seemed to be slightly outrageous.

It’s clear that women are not visible to our leaders and policy makers unless they are either being treated as a special ‘minority’ group in a policy silo or are relegated to an acceptable patriarchal category (mother, wife, daughter etc). When ERA advocates for policies which would improve housing outcomes for older women, we are careful to emphasis the relationships homeless women have with other people – she’s someone’s Mum, someone’s Nanna, we argue and therefore worthy of policy responses which meet her needs. When we leave this part out of our advocacy, the indifference we encounter is profound.

Countering this sort of invisibility is heavy work, which has to occur as much from within as without. It is also relentless work. It can’t be done without constant vigilance, which, for policy makers already struggling with the challenges of COVID19 and climate change, is a big ask.

Fortunately, there are structures which can be used to help to build the ‘seeing’ of women into everyday work. Gender responsive budgeting (GRB) is a way of making women’s life experiences visible in the policy development process. It involves using gender disaggregated or gender responsive data to assesses policies and budget proposals in terms of their gendered reach and impact. In other words, it’s a way of working out how the proposed policy or expenditure will affect women differently to men. Given that women make up 51% of the population, that’s got to be a useful thing to know. 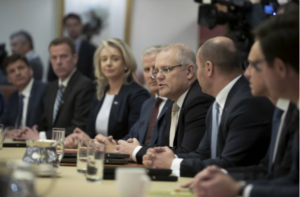 At the moment, when a policy maker sits down to work on a new policy, they usually (and unconsciously) use a mental model of the ‘average’ Australian which has more in common with the experiences of men than women. When deciding who should get tax cuts or which sectors should receive government subsidies, Government doesn’t routinely ask itself ‘how will this affect men and women differently?’ Take our superannuation system. On its face, it’s a non-gendered system, which provides retirement savings for a significant number of employees. It was not intended to benefit men more than women, but in reality, our superannuation system provides far better retirement benefits to men than to women, because men and women tend to have different working lives. Superannuation is maximised for those who earn more, work full time in ongoing roles and do not take career breaks to care for others. Statistically speaking, that’s men. A superannuation system designed with women in mind might look quite different – possibly with a system of carer’s credits, no income threshold, contributions which continue while on parental leave and differently targeted tax concessions.

A superannuation system designed with women in mind might look quite different – possibly with a system of carer’s credits, no income threshold, contributions which continue while on parental leave and differently targeted tax concessions.

The projected reviews into parliamentary culture are an important step forward, but reform needs to go deeper than just the interpersonal interactions in the house on the hill. In the aftermath of COVID19 and in the face of likely rolling disruption to our economic systems due to climate change, we need political structures which ensure policy is as efficient and universally supportive as possible. We can’t afford to not know how our policies and expenditure affect 51% of the population and we can’t afford for women to remain invisible any longer. And perhaps a parliament which focuses on women as a matter of routine in its daily work might finally understand what an inclusive and supportive environment would look like for women.

Helen Dalley-Fisher is Manager of Equality Rights Alliance. She has expertise in the community legal sector, following 10 years as a solicitor specialising in disability discrimination law, tenancy law and social security law. Her previous article for BroadAgenda was ‘It all adds up: why gender matters in budget responses’, 2 Aug 2020.