Virginia Haussegger
How does a woman, single-handedly, start a social movement in 2 weeks that brings over 100,000 people onto the streets to rally? And has Australia’s March4Justice unleashed a public roar against gender inequity that will echo around the globe?

BroadTalk with Janine Hendry takes a deep dive into the strategy behind building the March4Justice rally… as well as providing moving and personal insight to her motivation for taking on the Australian government.

Janine Hendry is an academic with a love of visual art and a flair for business. She’s never been an activist nor revolutionary, but what she staged in 47 locations around Australia, on 15 March 2021, could well go down in history as the birth of a new gender revolution.

It all began with a simple tweet, in which Hendry pondered how many ‘disgruntled women’ might join her to circle federal Parliament House in protest against the government’s dismissive treatment of young women, who had alleged rape and sexual harassment by political colleagues.

So, who is Janine Hendry and how did she do it? Perhaps most importantly, why did she do it? Well, it may surprise many to learn that for Janine it all began with a mother’s concern not just for girls… but boys. The son she lost, and the one she is now preparing to launch into the world. A world she wants to make a better place. 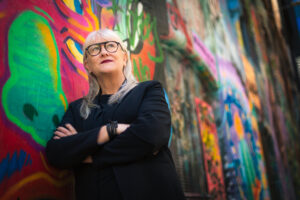 BroadTalk is hosted by journalist Virginia Haussegger and produced by Martyn Pearce. Join the discussion on facebook, BroadTalk, or twitter @TalkBroad #BroadTalk