Virginia Haussegger
Is Australia on the brink of a powerful, new women’s movement? Could this be the change we’ve been waiting for? And what happens after so much venting of such raw anger? This week has seen a public show of force unlike anything we’ve witnessed in decades, with over 100,000 people chanting ‘Enough is Enough!’, in over 40 locations around Australia.

The hastily organised ‘March 4 Justice’ was fuelled by recent high-profile allegations of rape and sexual abuse in parliament. But it quickly snowballed into a public outcry, as thousands of women and girls began sharing their own stories of abuse and harassment.

But where to now? What has the march achieved and what do we do with all this energy, rage and passion for change?

Helen Dalley-Fisher heads the Equality Rights Alliance, and is a seasoned feminist activist. Called upon by the campaign’s organisers to help steer the politics around some of the March 4 Justice policy ‘demands’, Helen sat down with BroadTalk just two days after the March to take a deep breath and reflect on … what the hell just happened! 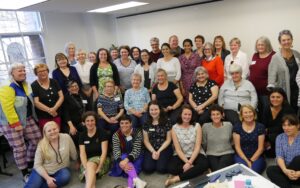 Participants at the 2019 ERA members meeting