The power of two: Swiss ambassadors show the way

Nothing unusual in two career diplomats starting new jobs on the same day? In fact, they were moving into a single position which the Swiss government allowed them to split and job share.

The Swiss Embassy in the Canberra suburb of Forrest.

The most recent position, which sees them based in the serene Swiss Embassy in the Canberra suburb of Forrest, has involved a role reversal. For the first time Pedro holds the main accreditation in the job share, with Yasmine covering the concurrent side-accreditations.

As a young family, they wanted to live together without compromising their careers. This was when the couple first negotiated to job share a single position.

After the birth of their first child in 2000 – both worked in Geneva – Yasmine was due for a posting abroad and Pedro was expected to start a new assignment at headquarters. As a young family, they wanted to live together without compromising their careers. This was when the couple first negotiated to job share a single position.  They were appointed together as deputy head of mission to Damascus in 2001.

“I was young, I had been in the Ministry for three years and I really didn’t want to interrupt my career by taking unpaid leave at that point,” Pedro tells BroadAgenda.

Taking the lead from another married diplomat couple they knew who job-shared, Pedro and Yasmine convinced the ministry to accept them both for the same position.

To make it work, they split dossiers so they didn’t cover the same issues and alternated working three days one week, and two the next.

It had to be very clear who did which duties and tasks, so there was a minimum overlap.

“We knew from talking to the other couple that there is always a risk that you do things twice or there’s friction because there is no clear line between responsibilities. It had to be very clear who did which duties and tasks, so there was a minimum overlap.”

After Yasmine gave birth to their second child in Damascus, Pedro simply took on 100% of the duties during her parental leave.

How well the arrangement worked won over their originally-sceptical Head of Mission.

“He ended up bragging about having two for the price of one, like a special offer in a supermarket,” laughs Yasmine, adding that “the Swiss are very forward looking and pragmatic in finding solutions”. 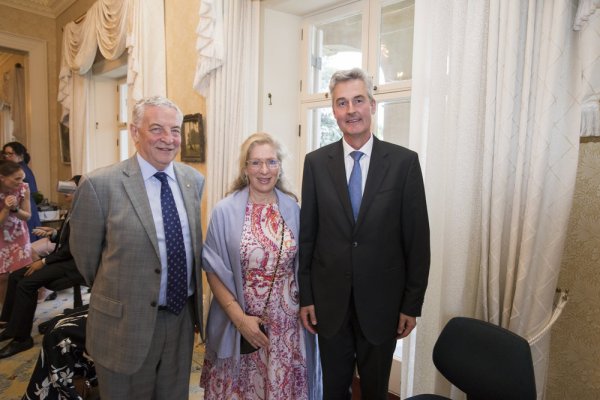 Robert Hill, Yasmine and Pedro at an official reception at Government House.

They job shared their next appointment in Lisbon and then again, after a period of separate jobs at headquarters, when they were appointed head of mission in San José de Costa Rica.

Once again, there were clear delineations in their roles and responsibilities so there was minimal risk of tensions and misunderstandings.

The world of diplomacy is full of couples, but the assumption that one partner – usually the wife – would pause her career while on an overseas mission can no longer be taken for granted.

As Pedro and Yasmine point out, the world of diplomacy is full of couples, but the traditional assumption that one partner – usually the wife – would take a backward step or pause her career while on an overseas mission can no longer be taken for granted.

For Pedro, job sharing was “always about female empowerment and shared responsibility”.

“It was always about equality,” he says.

And, of course, there are additional benefits. Built-in flexibility and two heads instead of one focusing on complex issues, for starters.

“We are both 100% diplomats. Whether we earn 50% salary or 100% salary, we are diplomats day and night,” says Yasmine. “But we felt that the time we spent as a family with our children was worth so much more than money. This time is part of our payment; that we have each had time to spend with our children.”

The children are now finishing school and enrolled in university and Pedro and Yasmine are thinking about their next appointments and whether job sharing will still be part of the picture.

But they are both grateful for the 20 years that their careers flourished in unison.