No avatar available for user with id . Pia Rowe

“You’re now in full menopause.” A recent visit to my GP confirmed what I had suspected for a long time. I am 41 years old, which means that while I’m sweating through the nights, wide awake and filled with less than generous thoughts towards my soundly sleeping partner, some of my contemporaries are still having children.

What’s more, this is not the first time.

That time was harsh. Medically induced. There was no gradual build-up. I went to bed in my late 20s and woke up a good deal older.

As the hot flashes washed over me, I wondered if I was actually just the butt end of a super cruel joke.

Most of it took place in the middle of my honours year. Still recovering from a surgery for endometriosis, I explained to the audience at my final presentation that the motivations for my project were partly personal. I researched career-oriented women’s perceptions on work and family balance – because one day I hoped to combine both. As the hot flashes washed over me, I wondered if I was actually just the butt end of a super cruel joke.

This second time round, with no opt-out clause thanks to medication, things are a lot different.

While my age puts me in the early-menopause category, there is no sense of panic. I’m one of the fortunate ones. With an extraordinary amount of help from modern medicine, including two dedicated, talented and generous surgeons, I was able to have two beautiful girls.

My childbearing years were over long before people started asking whether we’d have ‘one more’.

Nor is there that all-encompassing fear of loss that marked the first experience. Five years ago, as a second year PhD student, I climbed onto the operating table for one last time, and said a happy, relieved goodbye to the organ that had made my life hell for so many years. My childbearing years were over long before people started asking whether we’d have ‘one more’.

Physically, the natural and gradual progression has so far been far more gentle than the crash course I had in my 20s.

So, why am I talking about it?

Menopause impacts approximately half of the population. While each experience is unique, according to some sources, three out of four women will experience some symptoms, and one in four will have serious symptoms.

The stigma of menopause remains. Women often end up trying to cope alone at work, rather than asking for help for the fear of being seen as incompetent – or too female.

And yet, despite these numbers, the stigma of menopause remains. That means that women often end up trying to cope alone at work, rather than asking for help for the fear of being seen as incompetent – or too female.

As a recent article in Harvard Business Review noted, menopause also often intersects with a critical career stage when women are most likely to move into leadership positions. For those who experience symptoms at the rougher end of the spectrum, this may present some issues. Add to this the fact that gendered ageism is still a significant problem, and you can see why women can be reluctant to speak up. 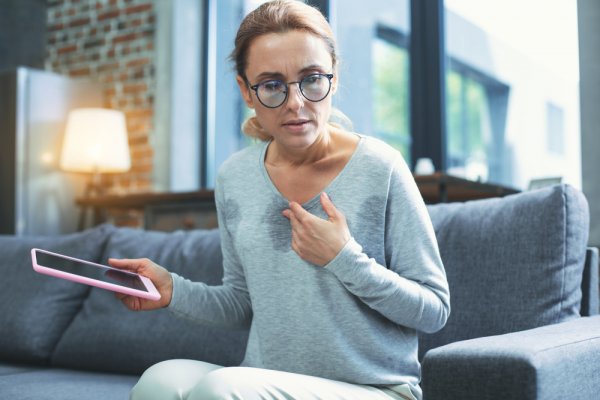 Of course, there are some protections in place. In Australia, the Age Discrimination Act 2004 prohibits discrimination in employment on the basis of age. The problem is, it only applies to overt discrimination. It is a lot harder to address the unconscious biases that still continue to limit women’s workforce participation.

What’s equally concerning is that the stigma can also be internalised. This is hardly surprising when we consider the long, complicated and dark history of women being diagnosed as ‘hysterical’.

While the catch-all diagnosis for various women’s ailments has thankfully been scrapped, in reality, the label hasn’t gone anywhere. And often, it’s not even linked to an actual ailment at all. A simple exercise in democratic rights can be enough to deem women unfit for public life.  For example, accusing the women who participated in the huge Women’s Marches across the US of ‘anti-Trump hysteria’ which essentially implied that their “public activism is not a product of reason, but a substitute for therapy”.

But what does this mean for women in the workforce?

Menopause is a fact of life so common and yet so unique, that it defies a universal approach for a solution in a purely practical sense.

Menopause is a fact of life so common and yet so unique, that it defies a universal approach for a solution in a purely practical sense. The idea of reducing women to their biology is antithetical to the very things we’re fighting for – ending the marginalisation of women, while celebrating and normalising diversity.

For myself, being ahead of the curve brings a certain sense of loneliness when the solidarity afforded by age does not automatically apply. Every time the topic comes up, someone inevitably throws in the “you don’t have to worry about any of this for a long time” line. And every time, I face the dilemma. Should I go, “Well, actually …” or just smile and leave it? How much of my private self do I share, and to what end?

But here’s what it comes down to: the only way to reduce the stigma is to make the invisible visible. To demystify and naturalise the full scope of human experience. Not so that we can regulate them, but so that we can better support each other.

And by doing that, we start creating workplaces where being inclusive is not just a tick-a-box exercise, where a woman can display a normal range of emotion without someone linking it to a bodily function or a mental disorder, and where people feel comfortable enough to ask for help when they need it without the fear of being stigmatised.

That’s why I’m talking about menopause.