Our weekly roundup of what’s news and newsworthy in gender equality.

Greetings Friends: Virginia is on leave, so this week’s BroadAgenda wrap comes to you from my sunny garden in Canberra.

For a moment last week, I decided the world was binary – divided into extroverts and introverts. How you were coping with our current state of social isolation depended on which camp you belong to.

Of course, it’s way too simplistic. Besides, I live in the national capital. It’s autumn. It’s beautiful, with warm days, cool nights, big sky vistas and black cockatoos spitting casuarina seeds on me as I walk the bushy ridges of Canberra. Life could be a lot worse.

It is. For many. For insight into the lives on women on the frontline of health care it is hard to go past Bryce Colvert’s profound and poignant article in The Atlantic as the US struggles with the highest number of coronavirus deaths in the world – and still rising. In it he writes: “Nursing-home employees, nurses, and home health-care workers—the majority of whom are women – are at the forefront of the coronavirus crisis, and they have long been underpaid, overworked, and under-resourced. The fact that these jobs compensate people poorly and burn them out quickly means that health-care workers have been in short supply across the United States for years.”

He goes on: “Health-care workers are setting up COVID-19 wards and makeshift field hospitals, putting in long hours, and wearing protective gear fashioned from trash bags and swim goggles.”

(Good journalism, it must be pointed out, doesn’t always come from major mainstream mastheads. One of the more insightful and interesting pieces, I read this week came from RMIT academic Lenora Risse (@Lenora_Risse) on the blog Power to Persuade. It contains one of the most compelling graphs comparing gender, age, income and low-paid essential work that I’ve ever encountered.)

The dysfunction of the world’s largest economy has been brought into stark relief by the coronavirus crisis, as have the daily ramblings of it’s President. As British writer Nate White wrote this week: “God knows there have always been stupid people in the world, and plenty of nasty people too. But rarely has stupidity been so nasty, or nastiness so stupid.”

Which poses a dilemma for Americans when they come to vote later this year. The Democratic nominee Joe Biden, like his opponent Donald J Trump, has been accused of sexual assault. This time by a former staffer.

“With Biden as the presumptive Democratic nominee, the general election in the fall will pit two white men, who have both been accused of sexual misconduct, against each other. Across the board, it’s this “lesser of two evils” argument that has left women feeling frustrated.” More strong journalism from The Lily, a media outpost from The Washington Post.

Meanwhile, several media outlets have noted the correlation between women leaders and assertive (and effective) national responses to the pandemic. Taiwan’s Tsai Ing-wen, Germany’s Angela Merkel and New Zealand’s Jacinda Ardern spring immediately to mind. As do Finland’s Sanna Marin and Iceland’s Katrín Jakobsdóttir. Compare that to Boris and the The Donald, if you will. And even, as CNN does, with Sweden’s Stefan Löfven. It really does beg the question: would the world be a better place if we had more female political leaders.

It really does beg the question: would the world be a better place if we had more female political leaders.

Closer to home, it is both scary and reassuring that men have been ringing male helplines in unprecedented numbers, even as reports of domestic violence spike. Which makes it timely that journalist Jess Hill was awarded the prestigious Stella Prize for writing for her superb – and devastating – book on domestic violence Look What You Made Me Do.

Closer to home, our Chief Editor Virginia Haussegger, had a thought-provoking piece published in both The Canberra Times and BroadAgenda. Her anger is palpable as she ponders the heavy burden women are carrying right now as a result of Australia’s heavily gender segregated workforce, coupled with an entrenched gender pay gap – forcing parents to make some tough decisions.

Virginia was also an impassioned guest on the ANU podcast Democracy Sausage, along with Tim Costello and Maria Taflaga, on the topic of the corona crisis care deficit. 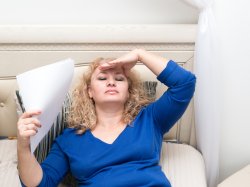 Virginia’s article kicked off a stellar week for BroadAgenda with all our submissions coming from inside the tent, so to speak. On Tuesday, our academic editor Pia Rowe wrote a profound and personal piece on the early onset of menopause and asked the fundamentally important question – why is it still taboo to talk about it when 50% of the population will suffer (and suffer we do) from it. This has significant implications for workplaces, especially as menopause most commonly occurs when women are hitting their leadership strides. As Pia points out, “the only way to reduce the stigma is to make the invisible visible. To demystify and naturalise the full scope of human experience. Not so that we can regulate them, but so that we can better support each other.

Yesterday Trish Bergin, co-director of the 50/50 by 2030 Foundation wrote about how COVID-19 might just bring about an end to the old world order and usher in a new paradigm for government.

“Many are now of the view that it this unimaginable crisis can help us to refocus on what economic growth is for. It can and should allow for a more holistic and ambitious scope, starting with the planning for the future Australian society we want and the role of the economy in pursuit of that,” she writes.

And amen to that.

Virginia will be back next week. Ciao and stay safe.