It’s been another week of men behaving badly – but with a difference. This week we have seen men – powerful men at the top of powerful institutions – suffer consequences.

Over at AMP heads continue to roll. As the University of Wollongong’s Andrew Schmulow wrote in The Conversation this week:

“The sexual harassment scandal enveloping AMP is another graceless turn in what looks like the death spiral of one of Australia’s oldest and formerly most trusted companies.”

This week saw the company’s chairman David Murray and board member John Fraser quit after the promotion of Boe Pahari to head AMP’s capital business division. He had been disciplined – and fined $500,000 in 2017 – for sexually harassing a female colleague. (The fine was equivalent to only a quarter of his annual bonus.)

It follows the departure of another senior executive, Alex Wade, who exited the building in a rush earlier this month after several female staff members complained of him sending sexually explicit photographs.

Hats off to Michael Roddam at the Australian Financial Review who has relentlessly pursued and brought to light the goings on at AMP.

In South Australia, a report from the Independent Commission Against Corruption found the head of the University of Adelaide, Peter Rathjen, had “committed serious misconduct” by sexually harassing two female staff members having an affair with a third.

Rathjen had already resigned in July after giving evidence – which was found to be dishonest and self-serving – to the ICAC inquiry. The university’s new chancellor Catherine Branson (the fiasco ensnared the previous chancellor Kevin Scare) put out a statement this week saying such behaviour shouldn’t be tolerated in any organisation.

She noted that the university regretted its “initial handling of this incident” and acknowledged that “the way in which the matter was initially dealt with by the university was not appropriate”.

Sounds a lot like the age-old corporate tactic: obfuscation and misplaced blame protect brand and reputation better than addressing the issue head on. Wrong!!

Meanwhile, the very wonderful E. Jean Carroll – who accused Donald Trump of raping her in a changing room in Bergdof’s department store in the mid-1990s – will, each week between now and the November election, interview a woman who has alleged that Trump “moved on” her.

The interviews will be run in The Atlantic under the title “I moved on her very heavily”, borrowing directly from the President’s own boasts about his skills as a seducer of beautiful women.

The women say they dodged, ran, froze, ducked, resisted, or laughed at him; and we all stood up, spoke out, got dragged through the mud, belittled, and besmirched

“Nineteen, or 25, or 43 women have come forward to accuse Trump of ogling, grabbing, groping, mauling, or raping them,” Carroll writes in her introductory essay. “The women say they dodged, ran, froze, ducked, resisted, or laughed at him; and we all stood up, spoke out, got dragged through the mud, belittled, and besmirched.”

The first compelling essay is with Natasha Stoynoff, a People magazine reporter who claims the President “moved on her” at Mar-a-Lago in 2005 while covering Donald and Melania Trump’s one-year wedding anniversary.

Shifting gear, it appears the government has been listening – how could it not – to ongoing commentary about the she-cession – or how women are more harshly impacted by the COVID economic fallout than men.

[The government] will reveal details of a plan to address inequities in the workforce and the gap between women and men’s superannuation savings.

The Sydney Morning Herald reported this week: “In a sign the government has heeded warnings women are bearing the brunt of the coronavirus-induced slowdown, Assistant Minister for Financial Services Jane Hume will reveal details of a plan to address inequities in the workforce and the gap between women and men’s superannuation savings.”

We also covered the topic in BroadAgenda this week highlighting how embedding flexible work arrangements is a fundamental step towards reaching gender and pay equality in the workplace, alongside affordable childcare, of course.

We can’t end the week without pointing you in the direction of some excellent reads and listening.

First, why Michelle Obama’s necklace in this week’s Democratic National Convention has something to say (it literally says VOTE). 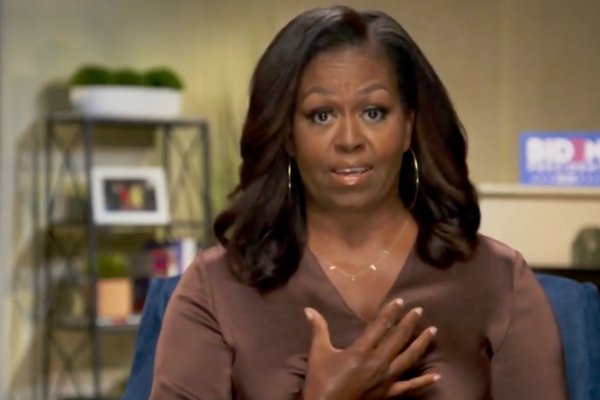 Michelle Obama, jewellery with a message.

“Obama’s is the latest in a long line of celebrated examples of jewellery as a political device: from suffragettes’ medals to Madeleine Albright’s pins. Even brooches worn by Queen Elizabeth have been read by some as political statements,” writes Griffith University’s Elizabeth Shaw in The Conversation.

We loved a piece in the New York Times about how the American Girl Scouts uniform has been oh-so-stylishly updated for Gen Z.

“A vest designed for the modern Girl Scout must have pockets, and those pockets must be large enough to fit the largest model of the iPhone.” Of course, it must.

A new biopic on Helen Reddy hits the streaming service Stan tonight. Her feminist anthem ‘I am Woman’ wasn’t a hit with record company executives.

“It’s kind of angry,” said one. “It’s man-hating,” said another. “Wait until all this campaigning leads to unisex toilets. See how she feels then.”

And finally, we recommend the newest BroadTalk podcast in which Virginia Haussegger chats to her friend the formidable and tenacious Jane Halton, a Canberra bureaucrat who has “stubborn grit, self-belief … and a rather pragmatic attitude to cracking heads”.