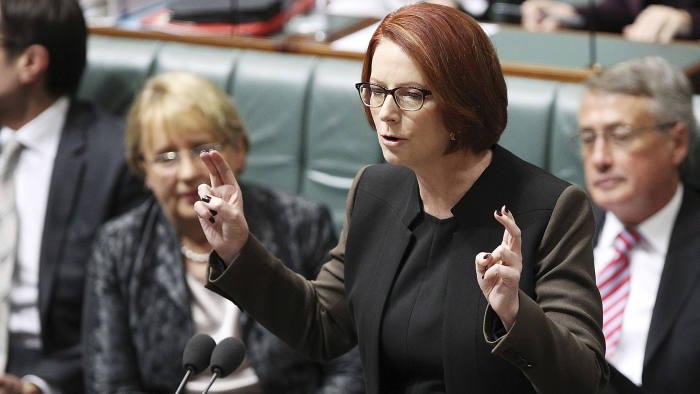 A theatre of the absurd? Women in Question Time

“Politics seems so much about strategy, posturing, wedging, trolling and the deliberate fostering of mutual antagonism. Question Time typifies this negativity … Politicians, if they choose to or if they feel they have no choice, can resort anywhere, anytime to belligerence and over-simplification. But Question Time encapsulates and drives this caustic culture, because its purple but purposeless tone privileges and legitimises aggro and deflection.”

So wrote author Patrick Allington in his essay ‘On the abolition of Question Time’ in the June edition of Griffith Review.

Sharman Stone, who sat in Parliament for 20 years, vehemently agrees. “The childish insults, the fighting, the posturing, the aggressiveness” serves as an own goal – undermining public trust in both politicians and the process of democracy.

A parliamentary inquiry currently underway is taking evidence on what can be done to improve Question Time – an hour and a half of each sitting day during which cabinet ministers and their shadows pour invective and insults on one another.

Former Speaker Harry Jenkins has said that such behaviour would be illegal in any other workplace in Australia. 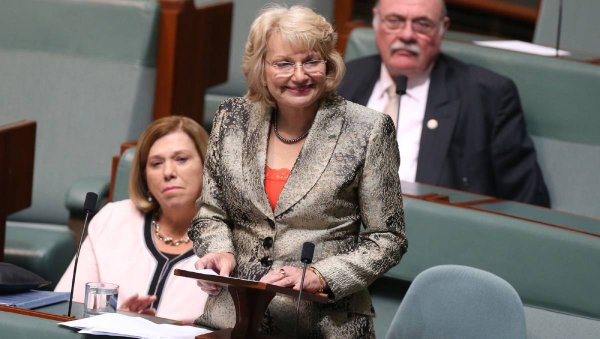 It is also, one could argue, a contributing factor as to why so few women are attracted to political life.

Indeed, Ms Stone says in the lead up to her retirement in 2016 she approached many women she considered “exceptional’ to put their hand up for pre-selection for her seat.

It’s easy to see why. Last week, for example, the NSW Health Minister Brad Hazzard was forced to apologise to Opposition Leader Jodi Mackay 24 hours after an outburst that derided her as “quite stupid”, “a goose” and “a complete pork chop”.

Brad Hazzard indicated today that NSW may have a shortage of face masks. So we asked him about it in Question Time on your behalf. His rude response was unfitting of the Minister in charge of our pandemic response. pic.twitter.com/vnXFIUv6Zq

McKay was trying to get an answer to the availability of face masks in NSW. Hazzard retorted with: “You certainly need one”.

McKay, to her credit, remained calm, if flustered, appealing to the Speaker to bring about an end to the attack. Hazzard’s apology, when it came, was that he was “tired” and “frustrated”. No doubt, like three year olds get tired and frustrated.

So, are women MPs disadvantaged by such political theatrics?

Sharman Stone says, politicians who perform the “best” – who score the most points, get the most laughs, are the most raucous and caustic – are rewarded. Those who don’t – or can’t – rise to the occasion are overlooked within their party for promotion and viewed as wimpy and lacking in leadership qualities.

A bombastic performance at the question box is seen as an indication that you are on top of your portfolio; that you are in command of the facts.

“A bombastic performance at the question box is seen as an indication that you are on top of your portfolio; that you are in command of the facts,” Stone says. “Whereas an intelligent, considered and informative exchange would mean you are weak, not politically powerful. That is very gendered.”

It points to a double standard. Men who are loud, assertive and aggressive are viewed by their colleagues and the public as strong and powerful. Women, however, are viewed as bitches and battle axes.

“Ms O’Byrne, it’s very unladylike to be yelling in the Parliament,” Ms Hickey interjected during a debate.

Following the exchange, Ms O’Byrne noted: “Even the word ‘lady’ presupposes a certain standard of behaviour that some women do not deserve to receive. It’s discriminatory in its very nature.”

The real problem is the expectation for women is completely antithetical to conceptualisations of masculine parliamentary behaviour.

As ANU gender and politics researcher Sonia Palmieri wrote in BroadAgenda at the time: “The real problem here isn’t that there is a difference of expectation – it’s that the expectation for women is completely antithetical to conceptualisations of masculine parliamentary behaviour. Ms O’Byrne was asked to conform to a yardstick that would never apply to men, or our ‘ideal parliamentarian’.” 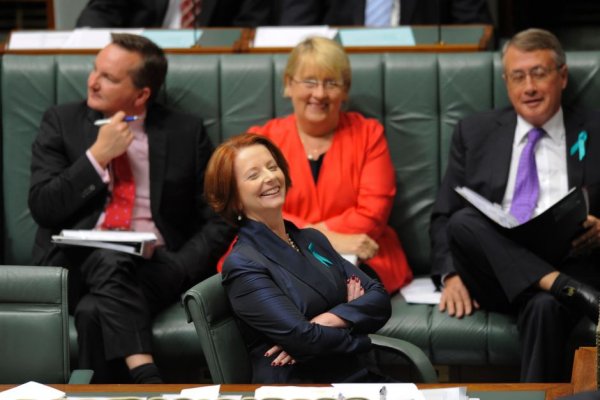 While former Prime Minister Julia Gillard’s famed misogyny speech was not delivered during Question Time, Gillard has spoken of how she enjoyed the ‘boys’s game’ and gave as good as she got.

“I always took the perspective that you have to show that women can survive in these adversarial environments and not only thrive but dominate them,” Gillard told Williams.

Indeed, in her new book Women and Leadership, co-authored with Ngozi Okonjo-Iweala, Ms Gillard writes: “My leadership style was certainly a mix of characteristics that people would think of as typically ‘male’ and ‘female’”.

Increasingly Julia Gillard found “that the go-to weapon in political debates became the kind of insults that only get hurled at a woman”.

But increasingly, as she served as Prime Minister, she found “that the go-to weapon in political debates became the kind of insults that only get hurled at a woman”.

“That emerged as a trend alongside what was already a highly gendered lens for viewing my prime ministership. Every negative stereotype you can imagine – bitch, witch, slut, fat, ugly, child-hating, menopausal – all played out.”

Former Liberal MP and then independent, Julia Banks, told the ABC that she was abused as “a lefty feminist” when she spoke out about the bad behaviour towards women in Federal Parliament.

“Often when good women call out or are subjected to bad behaviour, the reprisals, backlash and commentary portray them as the bad one, the liar, the troublemaker, the emotionally unstable or weak, or someone who should be silenced,” she said at the time.

She also told BroadAgenda last week that she felt horrified that school children were in the public gallery witnessing the shenanigans going on during Question Time.

“These kids have come to our nation’s capital to see how it all works and this is what they get to see,” Ms Banks said. “I remember a school group from my constituency was there and feeling sorry for the teachers. There were no role models on that day. I was [ashamed] of what the kids were witnessing,” she said. 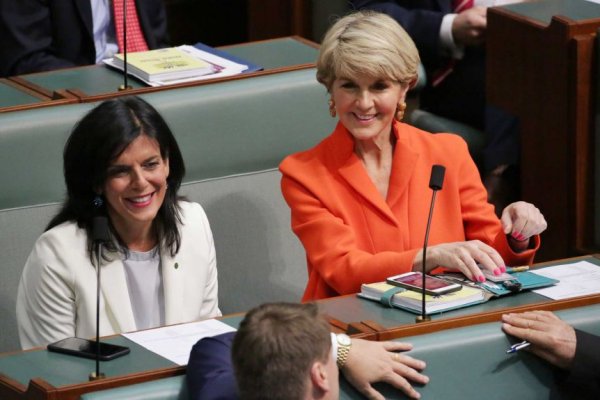 Jenna Price, an academic in journalism at University of Technology Sydney, agrees.

“I think of myself as a very brave person. But the very idea of going into a theatre designed to tear people down is just horrible,” Price says.

“Masculinity in its nature admires the big-noting, having the last word; it doesn’t admire consultation or real discussion.

They are laughing on our time; showing off on our time. They are wanting to attract the yucks. It really upsets me.

“You can see it from some of the MPs – Christopher Pyne, for example – who are dying to get a laugh from the audience. They are laughing on our time; showing off on our time. They are wanting to attract the yucks. It really upsets me.”

Daryl Karp, director the Museum of Australian Democracy, was questioned during a public hearing for the federal inquiry into Question Time last week.

“I told the committee that Question Time was unrepresentative of the rest of Australia and that there was a gendered nature to it because women MPs were less likely to be comfortable the adversarial approach than men,” Ms Karp says.

“Question Time doesn’t play to the strengths of women who tend to be far more collaborative and collegiate. It disadvantages particular styles of female leadership.”

Dr  Palmieri says there is very little chance the current federal inquiry committee would bring an end to the political culture that drives Question Time.

“The is not the first time Question Time has been looked at,” Dr Palmieri says. “It is not going away, but the committee might be able to tweak it to the extent that bad behaviour is penalised, particularly if we are better at defining bad behaviour around personal attacks, sexist and racist language, that you would not want to see in any workplace.”

Asked whether, as Harry Jenkins suggests, Question Time would be unacceptable – even illegal – in other Australian workplaces, Sex Discrimination Commissioner Kate Jenkins says everyone, including Parliamentarians, are entitled to “a safe and respectful workplace”.

While writing the Australian Human Rights Commissions Respect@Work report, she heard “that women working in parliaments and in politics face sex-based abuse and sexual harassment. I also heard that some workers believe parliamentarians sometimes demonstrate a poor standard of behaviour.”