Increasing women’s electoral representation – Whose job is it?

When it comes to Australia’s progress towards gender equality, the general perceptions on how we’re doing don’t often match the reality. In a recent lecture to university students, I found the audience was surprised to hear that Australia wasn’t quite in the top 10 of the Inter-Parliamentary Union’s global ranking of women elected to national parliaments (single or lower houses). In fact, Australia isn’t even in the Top 40.

Following the 2019 federal election, women hold less than a third of the seats in the House of Representatives, a far cry from the gender parity reached in parliaments in Africa, Latin America and Europe.

International ranking of women in national parliaments: the top 10 and Australia. Source: Inter-Parliamentary Union Open Data, as at 5 November 2019

The question is, who are the institutional drivers for greater women’s representation in Australia? And how do we keep the momentum going?

While the battle for gender parity has not yet been won, there is clearly some positive movement occurring in different pockets of the country. The question is, who are the institutional drivers for greater women’s representation in Australia? And how do we keep the momentum going? 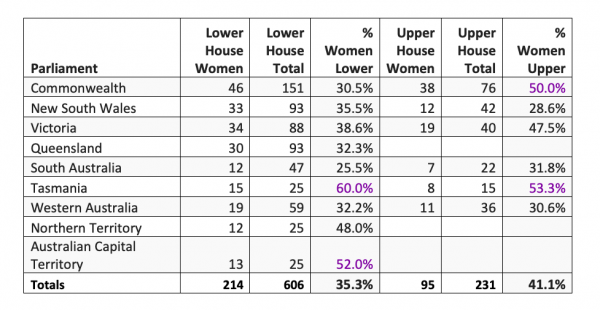 Political parties are ultimately responsible for the recruitment and selection of electoral candidates. In Australia, political parties – major and minor – still win the majority of legislative seats and therefore play a significant role in determining who becomes a decision-maker, albeit in characteristically different ways.

If women are to be asked how they are going to juggle work and family, then so too should men

Only one party in Australia has adopted a voluntary candidate quota – the Australian Labor Party – with remarkable success: today, almost half of its elected Members and Senators are women, compared with 23% of the Liberal Party of Australia’s elected MPs and Senators (see figure below). But all parties need to be held accountable for the way in which they select candidates, including the number of women who sit on preselection panels and the kinds of questions asked of those seeking preselection. As Annabel Crabb has written, if women are to be asked how they are going to juggle work and family, then so too should men.

Parliaments have a role to play by legislating ‘gender minimums’ for all political parties, but also by presenting themselves as attractive workplaces for women. Becoming gender-sensitive institutions should involve instituting stronger protections against harassment, bullying and intimidation, providing better work/life balance and family-friendly practices, and ensuring women aren’t marginalised as political actors.

The Australian federal Parliament, for example, has had a child care centre in operation since 2009 and in 2017, the Senate reversed its ‘strangers’ policy by admitting babies in the chamber to be breastfed. Of course there is a whole lot more work to do in this space. The Parliament still hasn’t been able to identify a role for itself in the resolution of workplace sexual harassment and bullying, and the idea of gender mainstreaming across the work of the parliament remains just that – an idea.

But civil society actors – including a range of Australian non-government organisations and academia – have also been stepping up to the plate by developing courses and workshops for women political aspirants. These events aim to work on the ‘supply’ side of the equation, by developing a robust cadre of women interested and capable of running for election.

Organisations like Women for Election Australia (WFEA) have worked tirelessly to advocate for, and inspire women to make politics their chosen career. Masterclasses have been run bringing emerging women leaders together with knowledge experts – campaign managers, current MPs, and party executives – to support women who want to take their first steps towards parliament. Taking its cue from a similar program at Harvard University, the University of Melbourne’s Pathways to Politics program similarly provides women with hands-on training and mentorship, including access to women from local, state and federal governments.

As is the case with all social change, it is the convergence of these three institutional actors that brings the best results

As is the case with all social change, it is the convergence of these three institutional actors that brings the best results. Civil society, however, has a special role in influencing change and keeping political parties and parliaments accountable for continued, sustained progress. Australia may be seeing glimpses of gender parity in some chambers, but whether this is a sustainable change that can be built on and extended to more legislatures remains to be seen. Equipping women with the kinds of skills not only to campaign, but to demand political accountability, is surely a necessary step.

Women for Election Australia and the Australian National University’s Crawford School will be hosting a non-partisan forum for women interested in running for office, managing a campaign or wanting to understand more about politics on Tuesday 26 November 2019 in Canberra. More information and tickets are available from wfea.org.au

Sonia Palmieri is an advisor to Women for Election Australia.