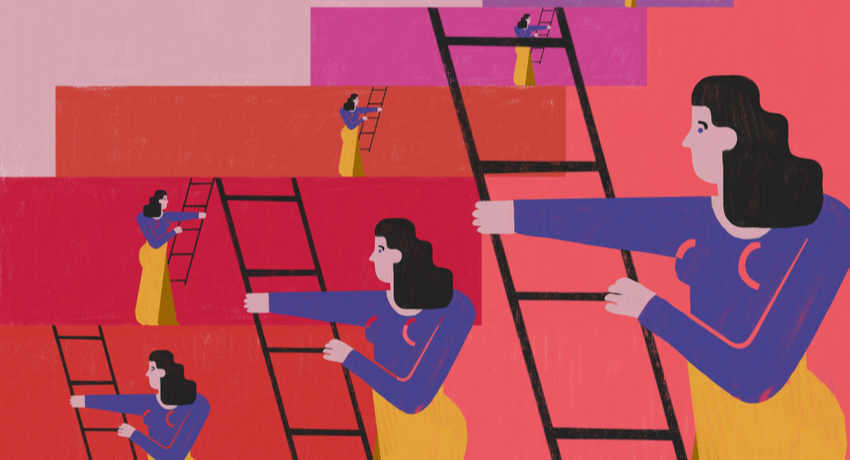 Pushing for reforms: The feminist battles of Iola Mathews

Have you ever wondered about the gender transformation of the Australian Council of Trade Unions (ACTU)? Once the bulwark of the male breadwinner, today it has strong female leadership and is the champion of more inclusive industrial agendas. Iola Mathews was a close observer of this transformation in the years 1984–94 and has written a compelling insider account of it.

Iola started as a cadet journalist at The Age in 1969 and became an education reporter. In this role she came across Ron Tandberg’s cartoons in a teachers’ journal. She succeeded in getting him taken on by The Age where he was to cartoon for 45 years, as well as providing brilliant material for equal opportunity campaigns. During this time she also met Joan Kirner, then President of the Victorian Federation of State School Mothers’ Clubs, who became a friend as well as an important source.

By 1970 Iola had been joined at The Age by Michelle Grattan. Michelle asked to report on Trades Hall but was refused, it being a place full of men who drank and swore. With her characteristic tenacity, when she got the chance she drank tea with the union officials and got good stories from them. Iola married in 1972, changing her surname from Hack (unfortunate for a journalist) to Mathews. Some of The Age executives thought that as a married woman she should stop work but they were over-ruled by the editors.

Earlier in 1972 Iola had been recruited along with another The Age journalist, Sally White, to become a founding member of Women’s Electoral Lobby (WEL). She says it ‘changed everything for me’. Her journalistic skills helped promote WEL’s early campaigns as well as the federal candidate survey, the most important third-party intervention to date in a federal election. The WEL interviewers were amazed to find how little candidates knew about issues of concern to women, including family planning and childcare: ‘Once our eyes were opened, they could never be closed again’.

The WEL interviewers were amazed to find how little candidates knew about issues of concern to women, including family planning and childcare: ‘Once our eyes were opened, they could never be closed again’

There was much to campaign on, such as picketing the Victorian Public Service exams to ensure two women were allowed in to sit. They passed the exam but failed the medical on the grounds they were female. Following all the WEL publicity, however, the Premier decided to end the exclusion of women. In another example, one of the WEL founders, Katy Richmond, was refused a bank loan without a male guarantor, despite being a sociology lecturer at La Trobe University – again resulting in a successful campaign.

After a period of raising children and part-time journalism new opportunities opened up with the election of the Cain Labor government in 1982. Mathews had been a member of the Victorian ALP’s Status of Women Policy Committee and was now invited to work on the equal employment opportunity program they had been advocating for the public service.

There were problems, however. The Premier, John Cain, did not want her working in the public service as her husband, Race Mathews, was now a Cabinet Minister and it might be seen as nepotism. What came next was a phone call from ACTU Secretary Bill Kelty asking her to come to the ACTU to co-ordinate the Action Program for Women Workers.

This brings us to the heart of the book, the account of the transformation of the ACTU as it engaged with issues such as childcare, equal pay, parental leave, part-time work and the gender issues around superannuation.

Mathews took on an increasing role in test cases, such as extending maternity leave to adopting parents and, most notably, as ACTU advocate in the test case on parental leave in 1989. Leading up to this was the long campaign for ratification of ILO Convention 156, Workers with Family Responsibilities, deemed controversial because it required governments to develop policies so that both men and women could combine paid work with family responsibilities. The kind of opposition faced by Mathews in the parental leave case can be gleaned from a column in The Australian by P.P. McGuinness:

For every gender-confused male in a secure white-collar job who wants to spend a year playing mother, there will be a dozen men who are forced into the underprivileged periphery, along with their wives, by such half-baked experiments in social engineering at the expense of a rational wage structure related to productivity rather than nappy changing.

Nonetheless, the case was successful, with The Age running a frontpage story ‘Historic ruling on leave for fathers’.

This is an invaluable account of the role of ‘insiders’, in this case feminists within the ACTU, in seizing opportunities when the political time is right, often in partnership with feminist insiders in government. Male allies such as Bill Kelty played a key role. His commitment to women constituting half of the ACTU executive by 2000 has led to its current female leadership team, with women as both Secretary and President.

This also reflects trends in union membership, with union density among women now being slightly higher than that for men, due to their concentration in the public sector and in occupations more likely to be unionised, such as nursing and teaching.

In some ways it is a highly personal story. Mathews’ commitment to work and family policy flowed from her own experience of raising children with a largely absentee father. And there are good anecdotes, such as Gough Whitlam being unable to find where the iron was kept when Race and Iola stayed with him in Paris while he was Ambassador to UNESCO. There are a few minor factual and spelling mistakes (a pity the Macphees are misspelt throughout) but it is well-referenced, citing many ACTU documents, wage cases and other official sources. One thing I did notice was the lack of reference to the academic work now available on issues such as gender pay equity or parental rights in employment.

Nevertheless, this is a highly readable account of how the gender transformation of the ACTU came about and the personalities involved. Recommended for everybody interested in how industrial issues became women’s issues.

This review was originally published on POP Politics and has been reproduced here with permission. Read the original here.