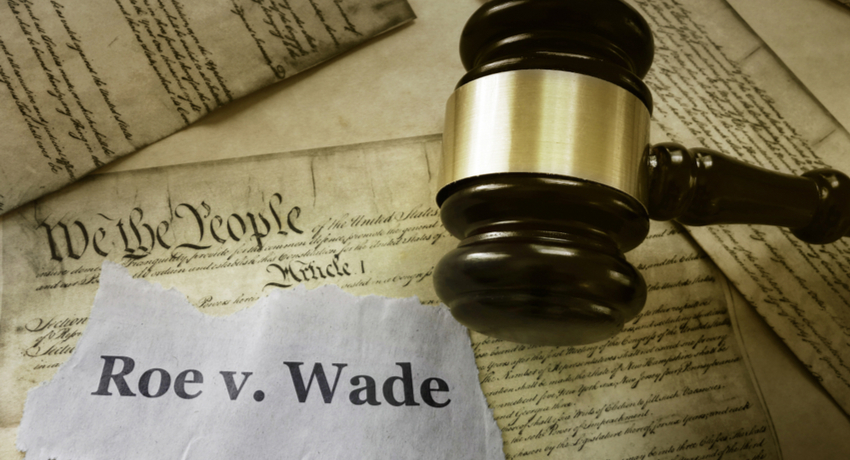 Whose womb is it, anyway?

For the past two decades Australians have been exposed to recycled cliches borrowed usually from US right wing activists, from ‘political correctness’, and ‘identity politics’ and more recently ‘virtue signalling’ which are shortforms designed to wedge communities on issues of values.

These so called ‘culture wars’ seem to be standard fare for the right of politics, and by attacking the person they seek to distract from the objective facts both about our modern economy and about the genuine issues that cause movements for social freedom.

LNP Queensland Senator Amanda Stoker, 36, former associate to conservative High Court Judge Ian Callinan, professes to be a liberal who supports basic freedoms such as free speech and association. She considers her legal training allows her to “analyse something dispassionately”, saying “The discourse at the moment goes straight from idea to judgment; there is no teasing out the way that ideas can be more complex”.

And yet, she thinks moderate Liberals who support individual freedoms suffer an identity crisis – seeing themselves fiscally right and socially progressive. Apparently these things are fundamentally irreconcilable.

Which is why she has staked her claim for advancement on the critical issue of late term abortions, recently moving a motion to call them a “crime”. 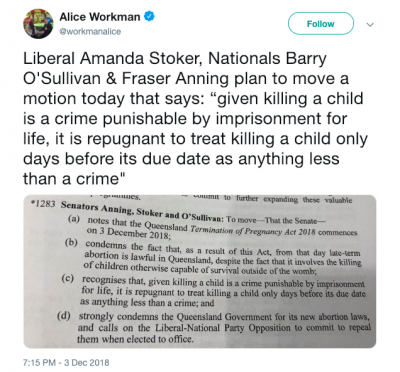 Termination has always carried a stigma and individuals who face these difficult choices have been branded all manner of things. There have been cases in the US and Australia of anti-abortion zealots committing acts of violence and even murder again those involved in delivering terminations.

Second wave feminists achieved major freedoms for their daughters, but the lesson of history is that rights once gained can never be taken for granted

Women and their wombs have long been chattel, whether under feudal principles of the law of male preference primogeniture (the British Monarchy’s succession law to allow a legitimate first born woman to take the throne was only changed in 2011), and even as recently as the 20th century women were treated as property for the purposes of divorce law. Take rape for example: under the pressure of second wave feminism progressive states such as Don Dunstan’s South Australia amended the criminal law to abolish the provision that a married woman effectively could not be raped by her spouse. Only in 1991 did the High Court rule that the common law position allowing spousal rape no longer applied in Australia.

Second wave feminists achieved major freedoms for their daughters, but the lesson of history is that rights once gained can never be taken for granted. 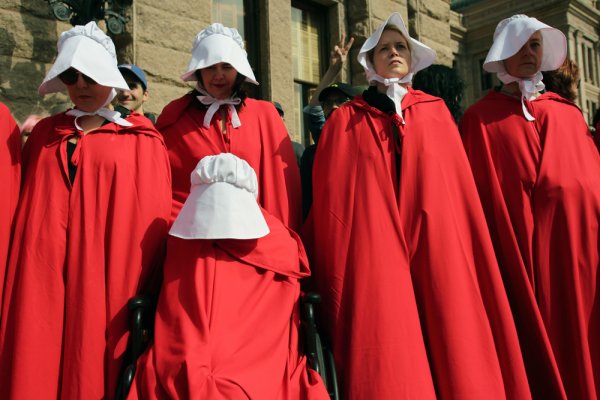 Austin, Texas / USA – Jan. 20, 2017: Women dressed in ‘Handmaid’s Tale’ costumes attend a rally for reproductive rights on the steps of the Capitol.

Margaret Atwood’s 1985 dystopian The Handmaid’s Tale became a television sensation with the arrival of Trump precisely because it spoke viscerally to the risk of women losing core freedoms. The landmark case of Roe v. Wade that provides a right to medically supported termination is likely to be under jeopardy within years.

Women born post war, who lived with the atrocities of the ‘backyard abortion’ era, can only shudder at what they recall

Women born post war, who lived with the atrocities of the ‘backyard abortion’ era, can only shudder at what they recall.

The number of late-term abortions are minute, and fundamentally done under extreme duress. But this is, apparently, the new battleground for the new Conservatives.

It’s one thing for the Senator O’Osullivan who, like Senator David Lleyhonhelm, infamously “slut shamed” SA Senator Sarah Hanson Young, to support such an attack on the weak. These men do represent the nasty sexist past.

But when we have a young woman who has benefited from all the reforms of modern feminism to decide that her sisters facing such trauma should be given a new label, a new stigma, then the idea of what “values” this conservatism represents becomes deeply chilling.

As US Conservatism goes, so blithely go we. Late term abortions became a moral crusade from the religious right in the US well ahead of here, but now we will have to see this unnecessary battle waged.

Childbirth, intrinsically, is a medically challenging experience. Not everything goes right, all the time

Childbirth, intrinsically, is a medically challenging experience. Not everything goes right, all the time. Conservative women such as Peta Credlin, Kristina Keneally and now Kelly O’Dwyer have been brave and compassionate in telling their varying stories.

In contrast the proudly public views of Senator Stoker seem harshly, at best perhaps naively, lacking is compassion, christianity and dare one say it, Liberal values.

Before deciding a woman facing such an extreme experience is a ‘criminal’ she may be better advised to sit down with them and tease out the complexities of the challenges they, not she, face.