Far from equal: The gendered impacts of climate change in Australia

On 20 September, hundreds of thousands of Australians marched in solidarity with school students participating in the global climate strike. News outlets and social media streams covered speeches and images from marches across the country. Did you listen to those speeches or look at the images? Girls were in the clear majority in leading and speaking during the strike, and images seem to suggest the same of participation.

There are many possible reasons for this. Perhaps the photographers preferred groupings with more women in them. Maybe girls tend to make more passionate speeches and wittier signs. Or perhaps women and girls really are energised by the threat of climate change in greater numbers as realisation grows that its impacts will not be felt uniformly across the population.

But despite both interest and solidarity, there is actually very little analysis of how climate change impacts will be gendered in the Australian context

There is a growing appreciation that climate change is a feminist issue. However, much of the current discussion centres on the gendered impacts in the Pacific region, the impact of Australia’s domestic policies, and the role of young Australian women leading the climate strike, and despite both interest and solidarity, there is actually very little analysis of how climate change impacts will be gendered in the Australian context. 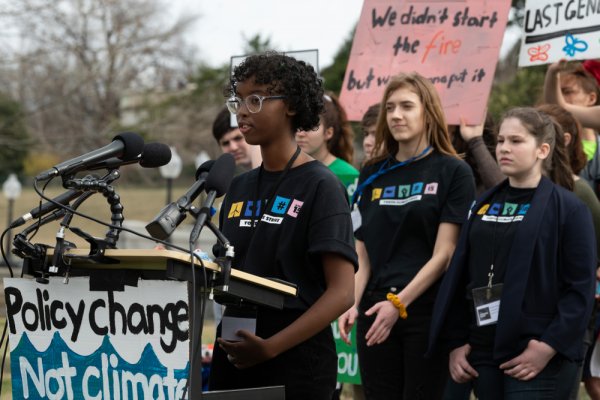 This may be because the issue – and the related concerns of infrastructure, energy, transport and disasters – are far from the usual stomping ground of feminism in Australia, compared for example with sexual and reproductive health rights, ending gender-based violence or economic equity. Given the urgency, now it’s time to change that. A few good starting points for the gender lens are decision-making, economic wellbeing and natural disasters.

For many feminists, one of the most exciting aspects of the climate strike was seeing young women, including Aboriginal and Torres Strait Islander women, lead the charge. Young Aboriginal and Torres Strait Islander women have also been leading the SEED indigenous youth climate network for climate justice, including participating in the Wangan and Jagalingou Family Council’s campaign against the Adani coalmine in North Queensland.

However, while young women’s leadership in steering the public debate is a welcome, and indeed a much needed development, the voluntary nature of their work also indicates a gendered-disparity between informal and formal decision-making roles. While Australia’s Minister for the Environment cabinet position is currently held by woman MP Sussan Ley, other relevant high-level key portfolios, such as Energy, and Infrastructure, Transport and Regional Development, are held by men. In the states and territories, office of the Minister for Environment is held by men in six out of eight governments.

Key industries related to environmental management and climate change mitigation and adaptation, including agriculture; forestry and fishing; electricity, gas and waste management; engineering and technology; and mining remain overwhelmingly dominated by men, particularly at key decision-making and professional levels. What’s more, according to recent data, 66% women report having their voices devalued in STEM careers, and encountering a lack of diversity in leadership, lack of opportunities and pathways to promotion and a lack of visible role models. At the same time, budgetary commitments to support the uptake of STEM education for women and girls have been reduced by the Federal Government.

This gap in Australian climate decision-making reflects familiar problems in the broader Australian workforce: while men predominate in paid professional and implementation roles, women make up the majority of volunteers. Planning for a just transition and climate change adaptation therefore requires a gender lens that accounts for the current gender inequalities.

The impacts of climate change on employment will be felt very differently by men and women. Job losses as a result of mitigation and adaptation requiring people to move from polluting and unsustainable industries to new work are most likely to occur in industries dominated by men. Women, on the other hand, are more likely to be economically marginalised and on social security payments, which makes them more vulnerable to the increasing price volatility caused by the extreme weather and uncertain rainfall – which is estimated to boost world food prices by 30% to 50% in the coming decades.

Climate change mitigation and adaptation measures may also increase the cost of living. Energy prices are expected to continue to rise as a result of the shift to sustainable and renewable energy sources, and the associated improvements needed to the infrastructure. The resulting energy poverty has greater impacts on low-income and unemployed households. Women currently dominate the lowest two income brackets in Australia,

The cost of living is likely to have particularly severe impacts on single parents who are more likely to be renting and unable to afford technology such as solar PV, energy-efficient housing and appliances, and who also have one or more children using appliances.  Currently, single mother families make up 81.8% of families led by single parents.

Climate change is associated with increased prevalence and severity of natural disasters. Recent weeks have seen extraordinary bushfires in Queensland and Northern NSW, and much of Eastern Australia is currently facing drought.

Natural disasters have gendered impacts, both in the immediate reaction and in the aftermath

Natural disasters have gendered impacts, both in the immediate reaction and in the aftermath. Analysis of Australia’s Black Saturday bushfires in 2009 indicates that while women were more likely to want to leave properties, men wished to stay and defend. After bushfires, men suffered significant post-traumatic stress disorder, in turn resulting in increased rates of violence against women.

Disasters may also intensify violence, particularly where women are separated from family, friends and other social supports that previously helped mitigate violence. The breakdown of broader social supports and structures following a disaster may mean that these women are more reliant on a perpetrator for survival or access to services. Post-disaster, women also bear a heavy workload of unpaid work and care in clean up, subsistence and care for children, elderly and the broader community, preventing them from earning wages or delaying or creating barriers to returning to paid work.

The issue also goes beyond gender. Factors such as disabilities, migrant background and language barriers may also reduce an individual’s ability to face disasters. As such, it is clear that an intersectional lens on disaster and emergency planning, response and recovery is also needed.

Slowly, some work is being done in this area. In 2014, the Victorian government established a Gender and Disaster Taskforce, consisting of two women’s health organisations and Monash University to provide direction and leadership to reduce the compounding effects of gender on disaster impacts. This Taskforce was funded by the Australian Government in 2016 to develop national Gender and Emergency Management (GEM) guidelines, but the guidelines are yet to be integrated into national policy emergency recovery policy documents. In addition, Australian state and territory and national emergency recovery plans remain largely gender-blind to both women and LGBTIQ-identifying people.

So what are the next steps? Climate change will impact people differently depending on their gender, as well as Aboriginal and Torres Strait Islander people, those in rural, regional and remote areas, people with disability, migrant and refugee people, and LGBTIQ. For women in these intersections, their experiences of economic vulnerability, violence, and discrimination are likely to be different yet again because of the specific ways gender inequality intersects with other forms of discrimination.

We need an intersectional gender analysis across all portfolios related to the climate, particularly the Departments of Environment and Energy, Infrastructure, Transport, Cities and Regional Development, and Industry, Innovation and Science. These areas have thus far largely been blind to the effects of gender and intersectional disadvantage in the policy analysis, but for all our sakes, it’s time for this to change.