A seat at the table? Civil society at the Beijing+25 Regional Review

The Beijing Declaration and Platform for Action is the internationally agreed agenda and UN policy position on gender equality and women’s rights. It was negotiated and agreed by 189 UN member countries at the UN World Conference on Women in Beijing in 1995. Although the Beijing Platform is becoming outdated in parts, it is still by far the most progressive international policy agenda for women’s rights and gender equality.

Since 1995, there has been little substantial progress made on this agenda at the yearly negotiations to advance the document at the UN Commission on the Status of Women (CSW) in New York. More recently, the focus for civil society advocates and more progressive governments has become about ‘holding the line’, or not losing ground gained in the Beijing Platform. Sexual and reproductive health rights, LGBTIQ+ sexualities and identities, climate change and the role and space for civil society and feminist groups in such global processes have become contentious issues and negotiation stalemates.

Historically, the Bangkok Regional Review meetings have provided more space for civil society than many other forums, with the negotiation opened to the observation of  – and therefore are accountable to – civil society; women’s organisations and feminist groups. The annual negotiations at the CSW in New York, in comparison, are closed and as such much harder to scrutinise.

Yet, this year in Bangkok, it became clear that transparency and the space for civil society are now increasingly under threat. 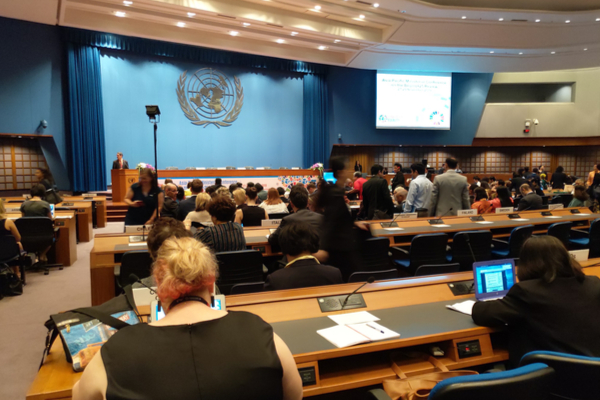 Before the Bangkok meeting began, advocates and activists from over 300 women’s and feminist organisations met in a civil society forum to discuss progress, challenges and issues arising across the region. During those three days, advocates were alerted to a quiet decision to close negotiations and exclude observers, which hadn’t been communicated to civil society, or the forum organisers.

300 women’s rights advocates had been funded and flown to Bangkok to sit silently in corridors, unable to participate or  observe decisions that were being made about their human rights

300 women’s rights advocates had been funded and flown to Bangkok to sit silently in corridors, unable to participate or  observe decisions that were being made about their human rights. Exactly where this decision came from was never made clear.

The committee leading the civil society forum mobilised immediately to put enough pressure on key decision-makers within governments and the UN to reopen the negotiations. However, the committee was only allocated space in the small negotiating room – that is, for about 20 people in total – leaving 300 advocates excluded from the process.

This shrinking of civil society space and the diminishing scrutiny of human rights is not a singular event, but a global, as well as a regional trend across the Asia-Pacific. Meanwhile, despite an increase in money spent on gender equality initiatives across the globe, only a tiny 1 percent of the spend is flowing to feminist organisations.

The Australian government delegation in Bangkok backed calls to make space for civil society in the negotiating room. The team of negotiators strongly supported and defended the importance of civil society, women’s organisations, women’s human rights defenders, youth organisations and feminist groups, which made it through to the negotiated outcome document.

Nevertheless, in spite of the Australian government’s welcomed advocacy at the international front line, civil society space back home on the domestic front remains under threat. Government support for women’s and feminist organisations has been decreasing for years, and just this week we witnessed defunding of the peak body for Aboriginal women who have experienced domestic and family violence – the National Family Violence and Prevention Legal Services (NFVPLS).

The Bangkok Beijing+25 Regional Review meeting raised more conflict and challenges than issues it resolved, and the final negotiated document barely held the line on the Beijing document drafted 25 years ago. At the last minute, the US voted against the entire document because of an objection to the inclusion of women’s ‘reproductive rights’ –  sending the conversation back decades.

The meeting raised concerns about the changing face and transparency of the international systems, and the civil society’s ability to continue to hold governments accountable when the spaces and institutions they have fought for in the past, including the UN itself, are now rapidly shrinking. The 2020 celebrations of the Beijing+25 Anniversary are called ‘participatory’, but what that means is not yet clear. Feminist and women’s organisations have issued a call to governments and the UN to ensure that ‘participation’ is meaningful.

For Australian feminists, it also raised questions over the gap between our country’s progressive international advocacy, and a domestic environment that is increasingly at odds with civil society, including our women’s and feminist organisations and movements.