Women make up 50.7% of the population, but as the new report from the Women’s Leadership Institute Australia shows, the stories in the media do not reflect this reality.

Researchers from the University of Technology Sydney analysed 15 of Australia’s most influential news sites for the gender representations across various indicators, including the gender of the journalist/s, sources cited, photographers, and subject/s of the photos. They also examined whether a journalist’s gender had an impact on the gender of the sources they quoted in news stories.

Here’s what they found:

Interestingly, this poor representation of female voices across news media cannot be directly blamed on a lack of women working in news gathering. Across all the online news sites analysed, the overall representation of male to female journalists were fairly equal (52% men vs 48% women). 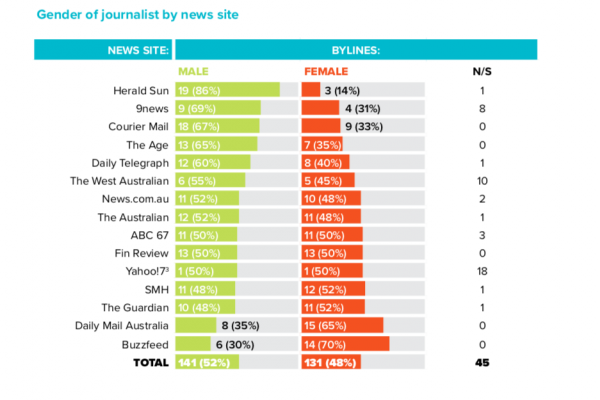 The representation of female journalists credited as authors across the news data set. Source: 2019 Women for Media report

Buzzfeed Australia is punching well above its weight with both the highest number of female journalists (70%), as well as being the only news site, which quoted more women than men (59%).

In photojournalism, women made up 22% of the photographers, and 36% of the subjects of photographs.

Gender, as the report shows, impacts news stories in various ways. Firstly, female journalists are significantly more likely to use female sources (40%) than male journalists (24%). As the authors noted: “if you want more diverse sources, a good tip is to have more diverse writers”.

But a journalist’s gender appears to have a direct impact on what sort of stories they cover. About 60% of the stories across government, politics, business, finance, law, crime and justice were written by men.

Sports coverage was almost exclusively in the male domain, while 3/4 of the stories about celebrities and royals were written by women.

Government and politics was the single largest category of news stories (70 stories / 23%). Female journalists authored 39% of the political stories, while women accounted for 32% of direct sources, and 28% of indirect sources.

And if it’s political opinion pieces written by women you’re after, better not hold your breath, with only 16% of opinion pieces about government and politics authored by females.

Why does this matter?

Although the report indicates the number of women quoted in news media has improved somewhat in the last six years, there’s clearly a long way to go before we reach anything even close to gender parity in media representations.

Whilst women remain such minority players as news ‘sources’ and ‘experts’, the national voice of authority and knowledge – as represented in mainstream news media  – remains overwhelmingly male and masculine. And while the impact of that is beyond the scope of this report, the solid data supplied by the numbers alone should be enough to prompt news organisations to take a serious look at how their lack of gender diversity may be restricting and indeed limiting their news choices, stories and audience.

With that in mind it was disturbing to learn that according to the report’s authors, there’s a “declining interest within industry to participate in monitoring gender diversity”.

Despite Australia’s poor representation of women in leadership, it is interesting to note that little research attention has been paid to how extensively the nation’s mainstream media favour male voices and experts over female. The Women’s Leadership Institute Australia has taken the lead in filling this research gap with its first Women for Media Report released in 2013, and a second in 2016. This latest report is a critically important addition to building a data bank of knowledge on the representation of women and men in news media. Of course we look forward to a time when such calculations are no longer necessary, but based on the evidence provided thus far – that will be a long way off. 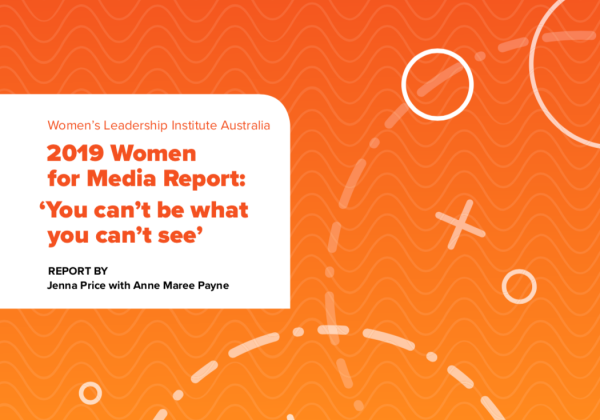