Rainbow Labor and a purple policy launch: Gender and sexuality in the 2016 federal election

The 2016 election was in part defined by marriage equality and rainbow issues. However, despite both the major parties having ‘feminist’ male political leaders, gender equality and women’s issues failed to gain any significant attention. While women might hold up half the sky, as Malcolm Turnbull was fond of saying, it seemed to be in a low-rent part of town.

For the 2016 Australian Federal Election Book, Double Disillusion, we wrote a chapter analysing the sexuality and gender issues that featured during the campaign. Thanks to the Coalition’s proposed marriage equality plebiscite, this election saw a rise of interest in sexuality issues. They featured more prominently than gender equality issues, of which only the predicted fall in the numbers of Coalition women MPs gained much attention.

One of the biggest issues of the election campaign was the debate over same-sex marriage. The Coalition was determined to take this to a plebiscite and vowed that if they returned to Government they would hold one at the end of the year. The plebiscite, which Labor, the Greens and the Nick Xenophon Team opposed, was repeatedly criticised as a ‘taxpayer-funded platform for homophobia’. There was also uncertainty over whether more conservative Coalition members, having insisted on the ‘people having their say’, would feel bound by the result.

Unlike Labor, the Coalition had no lesbian, gay, bisexual, transgender and intersex (LGBTI) policy launch or formal LGBTI party networks. They did have a number of openly gay men running as candidates and put more gay men into the federal parliament than Labor, although interestingly no openly gay women.

Labor had straightforward commitments on both marriage equality and broader LGBTI issues. For the first time there was a Rainbow Labor National Day of Action and Campaign Launch. At the launch, Senator Penny Wong reaffirmed that Labor would legislate for marriage equality within 100 days of being elected into government. She also announced that a Labor Government would create a dedicated LGBTI Discrimination Commissioner in the Human Rights Commission. The personal nature of Wong’s speech attracted media attention: ‘I know that a plebiscite designed to deny me and many other Australians a marriage certificate will instead license hate speech to those who need little encouragement’.

The Labor Party’s LGBTI policies gained more attention than its broader gender equality policies despite a women’s policy launch by Labor Leader Bill Shorten, with the Shadow Minister and the Cloe Shorten resplendent in purple. The women’s policy launch had some serious machinery of government commitments, including the return of gender budgeting and gender-impacct statements for Cabinet submissions. It also included significant commitment to front-line services dealing with domestic violence. Unlike the Rainbow Labor campaign, the woman’s policy launch received little media coverage.

In contrast to Labor, the Coalition had no women’s policy launch, issuing only a media release responding to the Labor event and affirming ‘the Turnbull Coalition’s commitment to supporting Australian women’. The lack of machinery of government commitments and problematic policy offerings in areas such as paid parental leave meant that Coalition received poor ratings from women’s advocacy organisations such as the National Foundation for Australian Women and Fair Agenda.

What perhaps was most striking were the declarations of feminism from both Bill Shorten and Malcolm Turnbull.

What perhaps was most striking were the declarations of feminism from both Bill Shorten and Malcolm Turnbull. Already in his Budget Reply speech, Bill Shorten had signalled the priority his government would give to ‘equality for women’, including action to close the gender pay gap and proper funding for childcare and paid maternity leave. He continued this emphasis throughout the campaign and began the main Labor policy launch with the salutation ‘Women and Men of Australia’.

In turn, Turnbull was questioned about whether he identified as a feminist, to which he replied ‘I am a feminist, yes … [women are] taking the world by storm’. His statement was in stark contrast to the reality that even fewer Coalition women had been preselected for winnable seats than previously, widening the partisan gender gap in the House of Representatives. 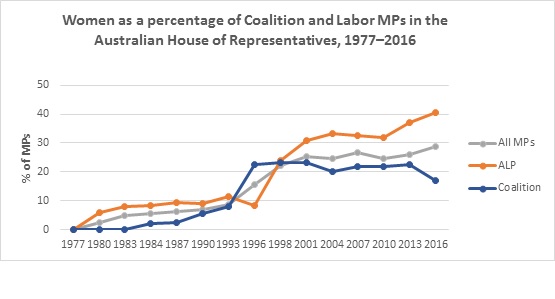 Source: Data collected by the Parliamentary Library, Parliament of Australia.

What was most interesting, however, was how male political leaders felt free to describe themselves as feminists, whilst both Liberal Deputy Leader Julie Bishop and Minister for Women Michaelia Cash were disinclined to identify with this label. It appears that in Australia, as in Europe, it is less risky for men in conservative parties to identify as feminist than for conservative women to do so. Conservative men can embrace the label to deal with their ‘women problem’ but conservative women run the risk of being seen as ‘man-hating’ or ‘lesbians’ if they do. 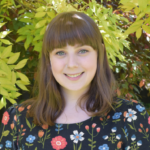 + posts
Dr Blair Williams is a Research Fellow and Lecturer with the Global Institute for Women’s Leadership (GIWL) at The Australian National University. Her research focuses on the gendered media coverage of women in politics. She is also a monthly contributor to the Canberra Times' Public Sector Informant and the regular federal political correspondent for Radio Adelaide.
← Previous article Next article →