Dr Jessa Rogers has a long history of working to empower Aboriginal and Torres Strait Islander people – particularly children and women. She was the first principal of the Cape York Girl Academy, Australia’s first boarding school designed specifically for young mothers and their babies, and has worked with MATSITI (More Aboriginal and Torres Strait Islander Teachers Initiative) and has been heavily involved in Reconciliation Australia’s Schools Program, Narragunnawali.

Dr Rogers is also a leader within multiple communities, and sits on the Federal Expert Reference Group on ELLIC (English Language Learning for Indigenous Children), the ACT Ministerial Advisory Council for Women, and the Management Committee of Future Earth Australia, Australian Academy of Sciences. She also recently completed a 3-year term on the National NAIDOC Committee.

Q1. What has been your biggest personal and career accomplishment so far?

My ‘greatest’ personal achievement was and is raising my sons. I fell pregnant at 16 and was kicked out of home. Managing to complete my undergrad double degree with him on my hip (and under the computer desk at QUT!) is something I still can’t believe I did. Looking back, I didn’t feel young. Now I’m 33 and I feel old thinking about my youth!

I aim to inspire other people by the way I work, not just through achievements or accolades

Q2. How would you define your leadership style?

Lead by example. I have never believed in anything more than working hard and doing my best, while lifting others up to do the same. I have observed many leaders who talk the talk, but don’t walk the walk. It seems so inauthentic to me. I aim to inspire other people by the way I work, not just through achievements or accolades. It’s the way you make others feel that I think sticks with those you are leading. Everyone has skills and talents and it sometimes only takes one person to see those to inspire change and action.

Q3. You graduated Year 12 with a 10-day-old son. What was that experience like and how has it shaped your leadership journey?

Being a woman and a mother are core to my identity, along with my Aboriginality. These three things are the only ‘constants’ I have had for over half my life, and really imbue everything I do. I think being a mother so young made me aware of the challenges people might be facing in their personal lives and inspired me to work with what schools sometimes call ‘at-risk’ students. Students who have additional challenges have always been a passion of mine because they are so resilient and amazing. They inspire me.

Q4. You have a strong background in the education sector. Do you think education policy adequately considers the development of girls enough to ensure they become strong and resilient leaders?

No, not really. We know the Government has had a much larger focus and has much greater spending on Indigenous boys, in comparison to Indigenous girls, for example. That makes no sense to me, when women are the backbone of many communities. The idea of women leading without men is still impossible for many male leaders to grasp.

I think education often tries to hit the middle – all genders, all ages, the average student – and hope for the best. I look forward to the day co-educational schools really have a focus on building female leaders. It has always struck me as strange, when I look at our multicultural, diverse society, constantly seeing the complete opposite in leadership spaces: boardrooms that are mostly made up of middle-age and older white people, and mostly males.

Q5. We are inspired by the Cape York Girl Academy – tell us about the Academy and your involvement.

In the final stages of my PhD on Indigenous girls’ experiences in boarding schools today, I received an email looking for someone to become school principal of a new school that was being proposed in Far North Queensland for teenage Indigenous mothers. Of course, I was immediately interested and applied. I had no idea the role was to write the curriculum, employ the staff, oversee a massive building project, start a childcare centre, gain accreditation as a school and – most importantly – enroll 15-20 girls from some of the most remote regions of Far North Queensland!

I’m proud to say I built an amazing team of mostly Indigenous women, and we did all of that and more. Once the school was running smoothly, I stepped down as Principal as had been the plan, and completed my PhD back in Canberra. I remain in contact with the girls, and two of them graduated last year from year 12, something many people never believed possible. 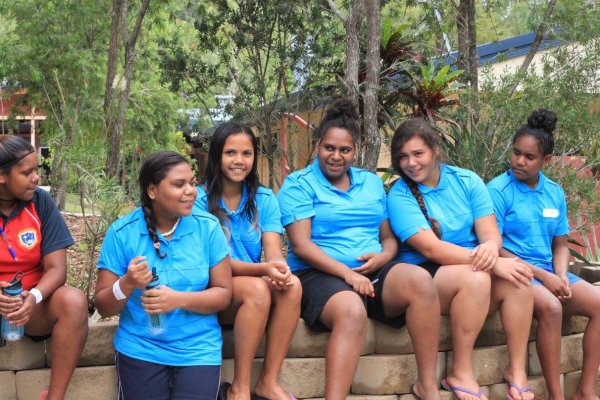 Q6. From your PhD in Photoyarn with Aboriginal and Māori girls’, to your work with the Centre for Aboriginal Policy and Economic Research, to sitting on the National NAIDOC Committee and the Federal Expert Reference Group on English Language Learning for Indigenous Children, your work with Indigenous communities is obviously a core value. What insights does this work give you regarding female Aboriginal and Torres Strait Islander leadership?

However, today, Aboriginal women in their 30s are not given the same space – it’s mostly older voices that are brought to the table by the Government

However, today, Aboriginal women in their 30s are not given the same space – it’s mostly older voices that are brought to the table by the Government, those 40+. I believe our young people are our future, and the space between ‘young Indigenous leader’ and recognised voices is something that I am focused on. There are huge numbers of Aboriginal women, known and mostly unknown, who are keeping Aboriginal progress going, and they deserve to be heard.

If you are inspired by Jessa’s story, come and see her speak at the 2018 She Leads Conference at the Rex Hotel Canberra on 1 August.