Pressing for Freedom: Letters from the Field Part 2

To give up is unthinkable

Hi, I am Pia Ranada, a reporter for Rappler, a news website based in Manila. For almost two years now, I’ve been covering Malacañang and President Rodrigo Duterte.

Two weeks ago, I was barred by the President from entering Malacañang—the Philippines’ Presidential Palace. A month before that, the government decided to revoke my company’s license to operate.

For as long as I’ve been covering President Duterte, I have been receiving death threats, rape threats, and verbal abuse

All this has happened amidst an environment of hostility towards free and critical press. For as long as I’ve been covering President Duterte, I have been receiving death threats, rape threats, and verbal abuse in varying degrees of offensiveness from supporters of the President.

These online hate messages are complemented by insults, false claims, and thinly-veiled threats from President Duterte and other officials in Malacañang. The head of the presidential guard once told me I should have been thankful that one of his guards did not hurt me while I was pressing him for more details about the President’s order to ban me from entering the Palace.

I can take all the other attacks, but this ban from covering Malacañang has affected my work as a journalist. I can’t ask questions during press conferences in person. I can’t report from the actual event of interest. I have limited access to sources of information.

But to give up is unthinkable.

What keeps me going are words of support and encouragement from complete strangers. They take the time to approach me and let me know they appreciate what we are doing. Some are scared to openly support us because of what might happen to their media company or to their jobs. This gives me more of a reason to keep reporting.

We need to be strong for people who can’t be.

The duty to overcome fear

I know you are discouraged and tired. We are in the era of de-democratisation where once prosperous democracies are now under the rule of authoritarian leaders.

This is very true for Southeast Asia. Threats to human rights and press freedom come from many sources, from authoritarian regimes to corporations to religious fundamentalists.

I know you need encouragement. So do I. Here’s my proposal. How about we get reacquainted with our younger selves to remember why we do what we do today?

These injustices inspired me to campaign for freedom of expression

My passion for seeing an equal, free and peaceful Thai society has been the driving force for my career in journalism. Inspired by John Stuart Mill’s Marketplace of Ideas when I was 20, I started to question the society where I grew up. I questioned the harsh sentences of the lèse-majesté law, which has been mainly used to silence pro-democracy advocates in Thailand. These injustices inspired me to campaign for freedom of expression.

At 25, I quit a well-paid, secure job for a lower-paid, less secure job at Prachatai, an independent news organisation renowned for its commitment to human rights. I reported about people who are harassed, arrested, and facing charges because they spoke up against authorities.

Journalism, I believe, not only creates awareness but also pushes the boundaries of what cannot be said in this society. Our work speaks to the international community so that the problem Thailand faces would not go unnoticed.

But there are moments when I feel that my work had zero impact. Thailand experienced its twelfth coup d’état in 2014. More people were arrested for their political expression in its immediate aftermath. 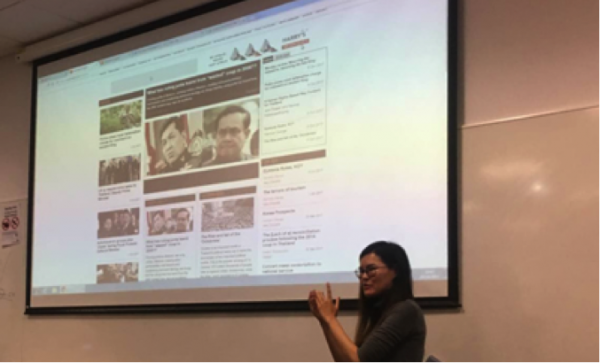 Am discussing freedom of expression in Thailand

Three years ago, I became a subject of military harassment. The military persistently intimidated my parents and threatened to file a charge against me for disobeying the military and violating the lèse-majesté law. Even when I lived in the United Kingdom for my Master’s degree, the military kept harassing my parents until early 2017.

I felt nervous after the incident. I censored myself for a couple of years to avoid trouble. It did not only affect my career but affected me on a personal level. I questioned my life goals. I paused to think whether my career in journalism is worth pursuing.

But quitting is not an option

But quitting is not an option. We have a duty to overcome fear.

Military men’s intimidation against female journalists will be successful if I fail overcome my worries and self-doubt. Quitting fails my younger, passionate self.

It is okay to feel intimidated and discouraged, but we should not let that fear overshadowed us for too long. We still have a long way to go in the fight for press freedom.

Thaweeporn (Am) Kummetha is a journalist at Prachatai.com/English. She is best known for her work on Thailand’s southern violent conflict.

Journalism is my religion 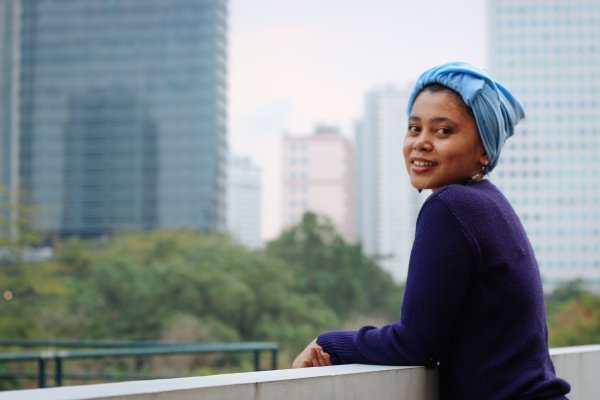 To my sisters in journalism,

We all know that journalism is a thankless job. Journalists are expected to bear witness to the most important stories of the day but when we report on uncomfortable issues—whether it is human rights violations, ultra-nationalism, or religious bigotry—we are on the receiving end of harsh criticism.

I’m sure you have your own stories about this. Here are some of mine.

I was once called an infidel for writing a story about the LGBT crackdown in Indonesia. Why would a hijab-wearing Muslim journalist defend the LGBT community? LGBTs are haram, I was told.

When I wrote about the 1965 massacre in Indonesia—one of the country’s darkest moments—I received death threats online from the followers of Islamic Defender Front. I was accused of being a neo-communist, which compromised my safety. I had no choice but take a couple of months off from my work.

These experiences are not unique to me. One of my colleagues has got it worse, when, after criticizing a Muslim cleric, was bullied by the “Muslim cyber-army” and left with no choice but to resign.

Outside Indonesia, we hear stories of religious fundamentalism that compromise press freedom. Our colleague from Myanmar Wa Lone, 31, and Kyaw Soe Oo, 27, have been accused of breaching the country’s Official Secrets Act, a little-used law from colonial rule, after reporting the crisis that erupted in Rakhine State.

Of course, I don’t believe that religion is the issue. The issue is when religion is used by autocrats and self-interested politicians as a political tool.

In times like this, we need inspiration. I take mine from Andreas Harsono, who declared “my religion is journalism.” If we adhere to journalism’s code of ethics, we have nothing to fear.

Chasing the truth, being skeptical with any and all groups, exposing oppression, giving voice to the voiceless—all these are part of our commitment to truth-telling.

And to tell these stories is both a right and a privilege. It is a right because citizens are entitled to receive information. But it is also a privilege for us journalists to be the messengers of stories of fundamental value.

A senior colleague told me that there is no story that is worth staking our lives. There are more stories to tell, and we could not do this if we are burnt out. So, take a rest and pace ourselves. Let’s look after each other. And we keep pushing on.

Febriana Firdaus has been working as an investigative journalist in Indonesia for ten years. Her work has been published in Tempo, Rappler Indonesia, TIME, BBC Indonesia, Jakarta Post, Vice Indonesia, The Interpreter, Lowy Institute, New Mandala, and DW Indonesia, among others.