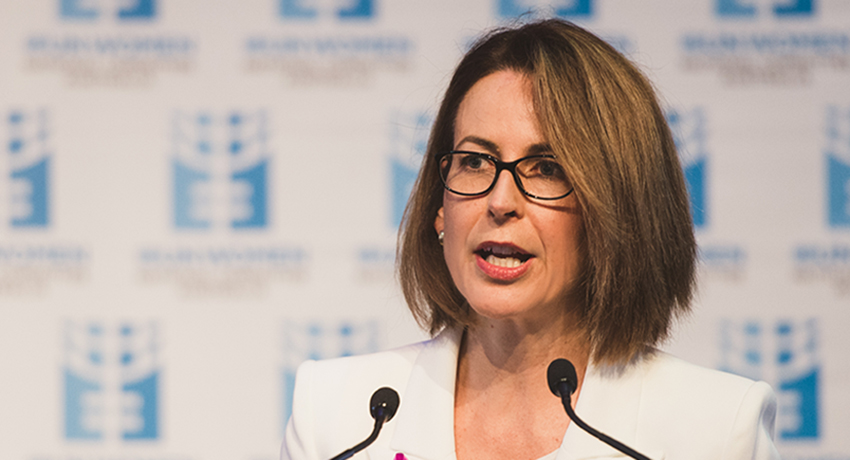 According to the World Economic Forum (WEF)’s Global Gender Gap Index, on the current trajectory (with all else remaining equal), it will take until I am 222 years old before we close the economic gap between men and women.

So where are we in terms of Gender Equality, both here in Australia, and around the world? What does the hard data tell us?

Surprisingly, despite decades of hand wringing about the lack of women in positions of leadership and key decision making roles, we’ve only begun collecting the data and measuring the gaps in recent years.

Which is perhaps why the head of the UN’s Global Gender Data Challenge says “when it comes to monitoring progress around the world, what we don’t know far outweighs what we do know.  (which) means there are critical blind spots for gender policy making.”

When it comes to monitoring progress around the world, what we don’t know far outweighs what we do know.

Back then, Australia ranked number 15 overall out of 115 countries. Foolishly (perhaps naively), I thought that wasn’t good enough. We should do better. Particularly as we ranked number one for Education, and 12 in the world for women’s Economic participation. But little did I know, over a decade ago, that that was as good as it got!

Since 2006 Australia has steadily declined in the global gender equality rankings. By 2010, we’d dropped down to 23. In 2015, we sat at 36. But last year – just when I thought “surely Australia can’t do any worse” – we did! From a global ranking of 15 just over a decade ago, Australia now sits at 46 on the gender equality ladder out of 144 countries. 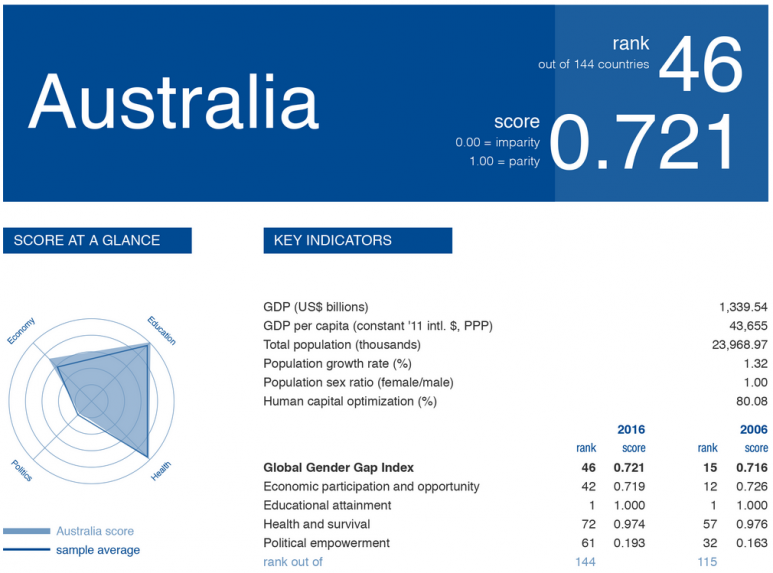 We have fallen below the United States, Trinidad and Tobago, Lao, Bulgaria, Ecuador, Colombia, Poland, Argentina, Costa Rica, Portugal, Cuba, Lithuania, Estonia, Mozambique, and Latvia. We are way behind all the Nordic countries, and an embarrassing 37 countries below New Zealand, which sits at number nine.

Our ranking for women’s economic participation and opportunity has dropped behind another 30 countries to 42. And we rank 61 in the world for political participation! All this from a country that still ranks number one for education. A country in which women are more educated than men, and have been for 20 years. Australian Universities have been graduating more females than males since 1995.

Our ranking for women’s economic participation and opportunity has dropped behind another 30 countries to 42.

So why? In one of the richest and most privileged countries on earth, with the most equitable access to education on the planet, why are women in Australia falling behind? Before we look closer at the Australian scorecard, consider these global statistics.

Currently among the 193 member states of the United Nations, just 17 have a woman Head of State and/or Head of Government. That’s up from eight back in 2005 when the IPU (Interparliamentary Union) first began counting. By my calculations, assuming that pace of growth continues, we might reach a 50/50 gender split of global leadership in 106 years, or in the year 2123. 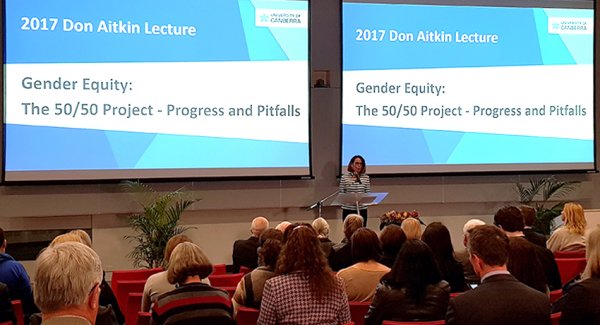 The problem is, that’s optimistic. The current tally of 17 women is a backward slide from the high of 19 a couple of years ago.

There are two key things I have learned in years of researching gender equality. One is that progress is not inevitable. The other is that hard won gains are easily and often quickly lost.

There are two key things I have learned in years of researching gender equality. One is that progress is not inevitable. The other is that hard won gains are easily and often quickly lost.

In 2011, for a moment it felt like we were turning a corner. On a bright sunny Spring day, a royal plane landed at Canberra airport. Our Head of State, Queen Elizabeth slowly clipped down the stairs. On the tarmac she was met by Australia’s Governor General, the Prime Minister, and the ACT Chief Minister. 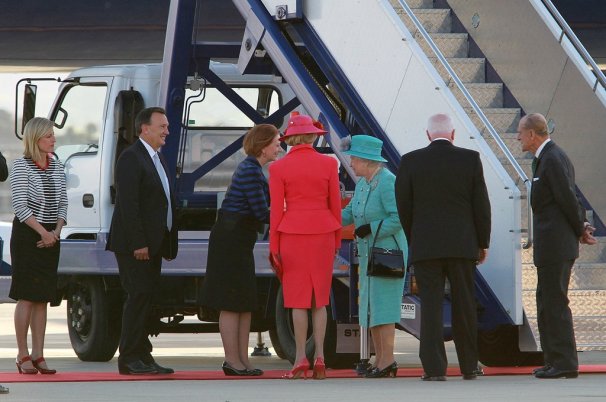 All four women shook hands and smiled for the cameras. It was an historic moment all right. I can’t help but wonder if such a scene will ever be played out in my lifetime again. Already three of those four positions have been replaced by men.

And as for the Queen, well there’s Charles in line!