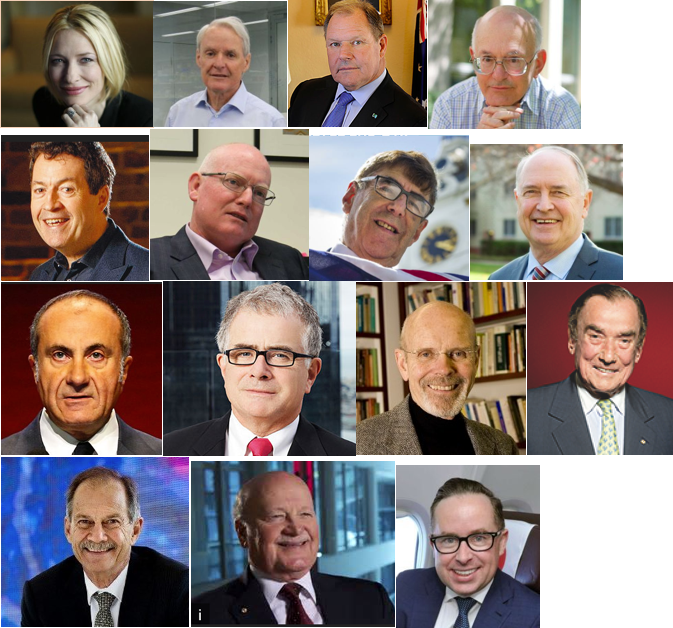 Australian Honours: Where are the Women?

Take a good look at this table of 15 outstanding Australians who have just received the top gong in the Queen’s Birthday 2017 Honours list, announced on Monday. Each has been made a Companion of the Order of Australia for their exceptional contribution to the nation through decades of work, passion, and generosity. They have dedicated themselves to a greater good, above personal achievement, and for that they deserve every bit of celebratory praise they’re enjoying right now.

But look along the line-up. What do you see? What’s the commonality?

Exclusively white. And overwhelmingly male. That much is obvious. But what’s less obvious is – why? And why again?

The lack of women recipients has been a biannual lament about the Australian Honours List for as long as I can remember.

Exclusively white. And overwhelmingly male. That much is obvious. But what’s less obvious is – why? And why again

It’s wonderful to see that great national treasure, Cate Blanchett, included in this year’s elite group. But really? Is Blancett the only woman we could come up with? Well into the second decade of the 21st century, in one of the world’s richest nations; which ranks top of the world for gender equality in education, where women out-qualify men (and have for the past two decades); and where sex discrimination in our workplaces and institutions was outlawed last century … is this really the best we can do?

Why is gender equality in Australia so frequently stuck at the 30% mark? And why is the representation of women so predictably poor when Australia celebrates leadership and achievement?

The previous round of awards was no better. The Australia Day Awards in January saw 727 general awards, with only 252 going to women. Back then, according to the Sydney Morning Herald, “men were nominated at twice the rate of women… with no women nominated in 6 of the 31 categories.“ The repeatedly poor inclusion of women has worried many – men and women – over years, and various campaigns have been mounted to encourage greater nomination of women, such as a vigorous online effort #HonourAWoman. Even the Governor General Sir Peter Cosgrove and his wife voiced concern in a public video earlier this year, appealing to Australians to nominate more woman. But is the problem only about nomination?

Why is gender equality in Australia so frequently stuck at the 30% mark? And why is the representation of women so predictably poor when Australia celebrates leadership and achievement?

Just to be clear – one cannot nominate oneself for an Australian Honour award. And nor can a recipient inquire as to who may have nominated them. It’s all highly confidential.

Behind this week’s roll call were over 1,000 carefully and dutifully completed nomination forms submitted voluntarily by people who want Australians they admire recognised publicly. The forms are long and detailed. And the fact checking and re-checking process by Government House is thorough and exhaustive. Overseeing all this is the Council for the Order of Australia: an eminent group of 18 people, which includes only 4 women. Some vocal women’s advocates this week slammed the warped gender representation on the Council for the poor showing of women in the awards, with Jenna Price in the Sydney Morning Herald calling for the whole Council to be sacked: “If the organisation that oversees the awarding of honours to Australians can’t get anything close to a semblance of Australia in those who receive these awards, the entire leadership needs to go. It must be replaced by people who are agents of change.”

There is no doubt the dreadful gender imbalance on the Council is an indictment on Australian democracy – given its worse than 4:1 ratio of men to women is nowhere near representative of the Australian community. However, that said, the Council includes a number of strong gender advocates, and sacking them does little to ensure more Australians will nominate women. The Council Chair, Sir Angus Houston, acknowledged the profound gender problem this week by again reiterating that there was no limit to the number of women who could receive awards – they just need to be nominated. So why aren’t they?

As Jenna Price points out, we’ve been talking about this for several decades. A 25 year old parliamentary report into the problem made recommendations that were ignored, but just as useful today – such as a nation wide, fully funded public awareness campaign, and an investigation into “making the process more accessible to the public to ensure that the contribution of women, particularly in the voluntary sector, is recognised and nominations are made”.

And here’s the rub. Women’s work and women’s contribution – despite decades of fighting against this – is simply not valued as highly as men’s. Women are expected to be the silent backbone of community cohesion, and give their time and skills for the broader good. Whereas men who do this are the exception. Their efforts are noted as ‘extra’ and we feel a communal need to encourage them with the reward of recognition. And validation. This gender bias is so deeply engrained, that women continue to nominate men for awards at a much higher rate than they nominate women.

The lack of women among award lists is not a matter of women failing to step forward (a simplistic ‘blame the women’ response). But rather it is women failing to recognise the inherent value in what they and other women do. Everyday.