When Meritocracy fails females: a culture shift to 50/50

“A hundred years ago, many ‘scientific’ reasons were advanced for why women couldn’t be doctors. Today there remained unconscious or unintentional, widely diffused differences in the ways boys or girls, men and women, were understood and judged. From cradle to first job application and beyond, in a sustained arc of development, these cultural factors were shown by empirical investigation to be vastly more significant than biology” (Ian McEwan, 2011, p. 140).

The core policy insight from Ian McEwan’s observation is clearly demonstrated in our report Not Yet 50/50: Barriers to the Progress of Senior Women in the Australian Public Service (APS).

The research was sponsored by six Australian Commonwealth departments as part of a broader project that was launched in 2011 on ‘Celebrating the Contribution of Women to Public Sector Excellence’. Members of the Institute were concerned that data on the representation of women in the ‘most’ senior echelons of the public service in Australia showed a decline despite the election of Australia’s first woman prime minister and governor-general. We therefore decided to investigate why. This involved a mixed methods approach encompassing qualitative ‘one to one’ interviews and focus groups in each of the departments and agencies. In each department approximately 20 Senior Executive Service (SES) officers were selected (114 total) for ‘one to one’ interviews with roughly equal numbers of SES men and women. In addition, one focus group was undertaken with EL1 and EL2 men and one with EL1 and EL2 women (one and two levels below the SES) with a total of 58 men and 79 women. Interviewees were selected to ensure representativeness across departmental functions and levels of seniority and findings were collated from the interviews and focus groups.

We observed that the quest for gender equality in the workplace (indeed any form of equality) requires a culture shift in dominant norms and values. Our four core findings underscored this central observation:

These findings lead us inexorably to the crucial question that if meritocracy is not a sufficient criterion for affecting the advancement of women what interventions are necessary to redress the imbalance? In the case of the APS, what interventions could be introduced to help navigate these barriers, achieve and maintain a better gender balance across the APS leadership?

We asked the people who participated in this research, from across six Commonwealth departments, for their suggestions about what their department and more broadly the APS could do to facilitate the progression of senior women in the APS. Despite different departmental cultures and proportions of women in senior positions, the responses were uniform across interviewees. People recognised that the key mechanism for achieving a gender neutral culture was to achieve a gender balance at all senior levels of the service.

It is notable that the improvement suggestions identified by our focus groups and in ‘one-to-one’ interviews mirrored the ingredients of better practice that are articulated in existing literature.2 The two strategic themes that stand out as relevant to all or most of the perceived barriers to progression are ‘committed leadership,’ ‘talent management and succession planning’, ‘workplace flexibility’, ‘support and development’ and ‘effective performance monitoring and evaluation’. The individual elements of each strategy are presented below within a behavioural change governance strategy, as seen in Figure 1. This emphasises the importance of adopting a systems perspective to change and removing barriers to workplace participation; making it easier for women to act; providing incentives and disincentives to achieve the right workplace behaviours and eradicate unconscious bias; together with standards to distil a whole of government responsibility for achieving and maintaining a better gender balance across the APS. 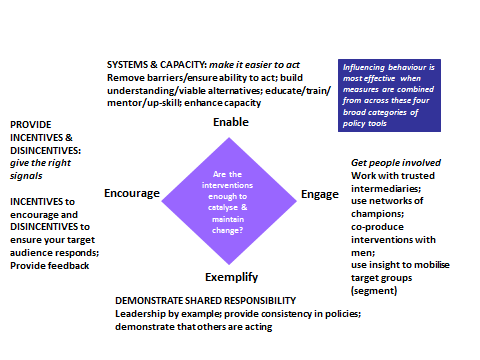 Further details on these pathways to gender blind leadership can be found at: http://www.governanceinstitute.edu.au/research/publications/recent-reports.

In contrast with the private sector, the APS has performed better on gender equity outcomes. But as the gravity of evidence here indicates, only when unconscious bias is eliminated can we say that the merit principle for appointments to senior positions applies and the evidence suggests that this will be an ongoing struggle. In addressing this issue, the APS will need the committed support of APS leadership; most of whom are men. The role for these men, if they are serious about pursuing an inclusive culture will be to ‘lean-in, listen and act’. The strategies identified here emphasize the need for leadership commitment to put into practice a culture of inclusive practices. That commitment will need to go beyond individual measures to the introduction of systemic organizational changes that change behaviour. This would not only benefit women but also assist in removing the cultural and organizational biases that are making it currently so hard to attract and retain other minority groups. In short, gender equity is a prerequisite for meeting broader diversity challenges.

3 The character of these proposed interventions are influenced by Carmel McGregor’s work on gender and leadership at the Commonwealth Department of Defence.