Don’t mind his misogyny: Has political language been Trumped?

“A sexual revolution begins with the emancipation of women, who are the chief victims of patriarchy, and also with the ending of homosexual oppression.” – Kate Millett, 1970

Whilst Australia struggles to legalise same-sex marriage, another prejudice silently stalks our polity – and it too seems to be one silenced, unable to be named in the event of overwhelming backlash.

Since Orwell we know that the deployment, definition and eradication of words is a deeply political process, reflecting fundamental power relations.

That the word ‘misogyny’ is now deemed too risky to deploy heralds an increasingly depressing era of political correctness – where the powerful determine the language of political discourse, and the parameters of political reform.

Nearly a year after the election of Donald Trump, we can begin to discern some common grounds and gender based themes in that  extraordinary victory.

On balance, reasoned commentators would include factors such as: the severe gerrymandering in Republican states with a  flawed  and nationally  inconsistent voting regime; the rise of digitally based ‘fake news’, with increasing evidence of  Russian intervention; Trump’s mercurial style and the positioning of his campaign as ‘Outsider’ v ‘Establishment’ (Clinton), despite Trump being the consummate insider born to privilege.

Additionally, Hillary Clinton carried the baggage of Bill, dating back to the Lewinsky affair. Some voters even suggested her forgiveness of her husband proved Hillary was an enabler of sexual predatory behaviour. And who can forget FBI Director Comey’s election eve intervention regarding the email saga. Hillary was well ahead in the polls only weeks from the election, but this act saw a massive plunge in support. Although she was exonerated days out from the election, the damage to the Clinton campaign was done.

Naturally the election didn’t occur in a political economy vacuum.

As America entered the 2016 election cycle the economic and social backdrop was one of profound  economic malaise post Iraq and GFC, with  the hollowing out of the middle class confronting loss of work or at best stagnant/falling wages and living standards.

Economic fears created terrain  fertile for the marshalling of anger, prejudice and hate: clear KPIs for Trump and his political Svengali, Steve Bannon. They targeted the anger at two objects: fear of immigration, and Hillary herself. Misogyny thrives in such an environment of fear and hate.

Whilst we seem prepared to acknowledge Trump as a master of fearmongering and hate-speech, with a preternatural capacity to use it to divide and conquer. And we can also acknowledge that misogyny is a subset of hate, hatred directed at women. Yet, for some reason we seem unable to accept that when Trump engendered hate, and channeled it at one particular woman, this was in fact misogyny – in practice. Despite there being plenty of corroborating evidence – from his boasts of sexual assault, to claims an American TV anchor was apparently incapable of clear thought because she might be menstruating – commentators still avoided calling him a misogynist.

We seem unable to accept that when Trump engendered hate, and channeled it at one particular woman, this was in fact misogyny

Trump continues to abuse and insult women, yet should a commentator make the otherwise unremarkable observation he is a misogynist, that commentator will more than likely be labelled extreme, or accused of playing the so called ‘gender card’.

Recent publications, such as “Shattered” by Allen and Parnes blames Hillary Clinton herself as the architect of her downfall – a classic case of victim blaming, in my view. More realistically the painful truth, as comprehensively documented by US academic  Susan Bordo in “The Destruction of Hillary Clinton”,  is that Clinton was subjected to a massive blitzkreig of misogyny, smear, abuse, innuendo and hate-speech quite unique in modern western democratic politics.

Bordo argues there was never a ‘crooked’ Hillary: from the alleged email debacle or ‘cash for access’, through to her supposedly being the mastermind of a paedophile ring run out of a pizza bar.

In our polity we would find such claims laughable, and the proponents mad, let alone fit for high office…

But then again, recall how we saw our first female PM Julia Gillard portrayed by the likes of radio shock-jocks such as Alan Jones, who suggested the PM should be drowned, and made unchecked insults on-air following her father’s death. He was also joined by former PM, Tony Abbott, in a demonstration that appeared to endorse hate-speech and vilified Prime Minister Gillard as a “Witch” and “Bob Brown’s Bitch” outside Parliament House in Canberra? 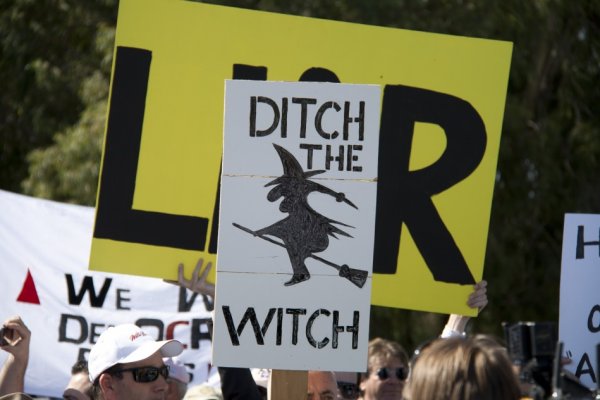 The parallels between the Gillard and Clinton experiences are as depressing as they are anger-invoking: insults about their bodies and analogies to bird parts; innuendoes about their sexual orientation and living arrangements; allegations of dodgy financial dealings through to bizarre conspiracy theories – claims frankly that would not stand the light of day before the court of public opinion if we were dealing with a male political actor.

And the Gillard experience seems to almost have magically been re-folded tactic by tactic, strategy by strategy, back into the US election. The unhealthy relationship of various right-wing think tanks cross-pollinating between Australia and the US is no doubt one aspect of this dynamic.

The Gillard experience seems to almost have magically been re-folded tactic by tactic, strategy by strategy, back into the US election

In Australia, our Bordo is journalist Kerry-Anne Walsh with her book “The Stalking of Julia Gillard”. Together Bordo and Walsh create a disturbing real-time description of the harsh and yes, misogynistic world that awaits any woman seeking public, let alone, high office. Their evidence of misogyny is proven well beyond reasonable doubt. The similarity of titles is itself a red-flag.

To be fair, journalists such as The Guardian’s Katharine  Murphy have rightly asked if the media at the time of the Gillard premiership missed the real portent of the hate, anger and misogyny whipped up by those whose leadership roles should have demanded more sober and responsible actions.

Recently media commentator, Jane Caro, also suggsted that we seem quite  ready to accept women, in politics as well as business, in roles as second-in-command – recall Hillary’s high standing as Secretary of State, or Julia Gillard’s high regard as Deputy PM. But it’s when they step up to take full control, in the top job, that we baulk. Fundamentally, in my view the evidence of misogyny is manifest.

Fundamentally, in my view the evidence of misogyny is manifest.

No doubt there will be endless debate about the 2016 US Presidential campaign and result, as there must be, but I find it curious that what is clearly a major ingredient – misogyny – is not even mentioned, especially in mainstream political discussion.

In dealing with the Presidential election we are talking about how one of the world’s great democracies selects its leader. It’s perhaps logical, albeit depressing, that misogyny exists in politics, where the contest is fundamentally about power, including its abuse.

Power can be exploited in every terrain, as we have seen with the Weinstein furore and #metoo exposing it as rampant in as many fields as those in which women operate and exist. Sure, misogyny is a powerful word: it demands to be heard when the facts demonstrate its presence, when the lives of women cannot be described by terms that seek to minimise their trauma and lived experience. It is a word we cannot afford to lose or dismiss.

In politics there is an old adage: “words are bullets”. Misogyny is a word we need in the armory of advocacy and empowerment. So why are we not talking more about misogyny in the mainstream? Why is it the prejudice that dare not speak its name?

Tony Nagy s a pro bono adviser on a number of important campaigns in the rights advocacy and health space, including the Little Blue Dinosaur Foundation.