The Macron movement: 50/50 in French cabinet

Gender equality advocates welcomed the election of Emmanuel Macron as President of the French Republic on May 7, 2017. During his candidacy, Macron had made a series of promises to promote gender balance and full parity in France, claiming that ‘women are not properly represented in executive boards and our National Assembly’. In his campaign speeches, he made five key statements:

Macron stated would like to appoint a female Prime Minister, more than twenty-five years after Edith Cresson’s appointment; He wanted to have full parity in terms of candidates representing his political movement; He promised to create a Ministry for Women’s Rights; He promised to appoint women as senior ministers; And he promised to promote parity within the French National Assembly.

He wanted to have full parity in terms of candidates representing his political movement.

So, has Macron made good on his campaign statements? Has female representation improved in France?

The short answer is ‘yes’. However, some commentators have expressed deep concerns over the pace and scope of reforms introduced by the president and his (male) Prime Minister, Edouard Philippe. Let’s take a closer look at the situation four months since the French elections.

Following the legislative elections held on and June 11 and 18, the French National Assembly is now composed of 224 women, accounting for 38.8 per cent of the seats. This is a major increase of 19.9 per cent compared to the past Assembly elected in 2012.

In August 2014, France passed a bill intended to ensure ‘real equality between women and men’.

In theory, political parties have a serious incentive to have full parity on their electoral lists. In practice however, some of the major movements (including the mainstream right Les Républicains) failed to meet the criteria.

Emmanuel Macron’s political movement, La République en Marche (LREM), included a total of 50.3 per cent of women on its electoral lists, and 47 per cent of its 309 elected MPs are women.

Even though critics might argue that LREM did nothing but respect the law in order to avoid financial sanctions, it is clear that the political movement contributed to this unprecedented increase in women’s representation in parliament, compared to other mainstream parties.

… but senior posts are held by men

This was a major disappointment for gender equality advocates. Despite Macron’s pledge to promote women’s representation in the French political arena, the Bureau of the French National Assembly is still mostly dominated by men.

Its presidency, considered as the fourth most important elected position in France, is held by François de Rugy. The eight parliamentary groups, including LREM, are all chaired by men, and have been since the creation of the fifth Republic in 1958.

No female Prime Minister and no Ministry for Women’s Rights…

While some observers expected the appointment of a female Prime Minister, Macron opted for Edouard Philippe from the Républicains party to fill the role. This choice met with criticism, especially given his campaign statements (though this was never formulated as a promise to the electorate). To date, Edith Cresson (1991-1992) remains the only woman to have held the position of French Prime Minister.

To date, Edith Cresson (1991-1992) remains the only woman to have held the position of French Prime Minister.

Furthermore, Macron failed to create a Ministry for Women’s Rights. Instead, Marlène Schiappa was appointed as Secretary of State in charge of Equality between Women and Men, with a very limited budget – that was further cut by 25 per cent in July. The decision was deemed worrying by many women’s rights associations relying on state subsidies to promote their actions around the country.

… but a 50/50 government with senior posts held by women

As far as the executive power is concerned, major efforts have been made to promote gender balance. Eleven out of 20 Ministers, and four out of 10 Secretaries of State, are women. This is in line with Macron’s campaign pledge.

This parity was in fact introduced in 2012 following the election of François Hollande. However, a major improvement was made in 2017 with the appointment of women in two of the five key ministries (i.e. Ministry of the Armed Forces and Ministry of Justice). 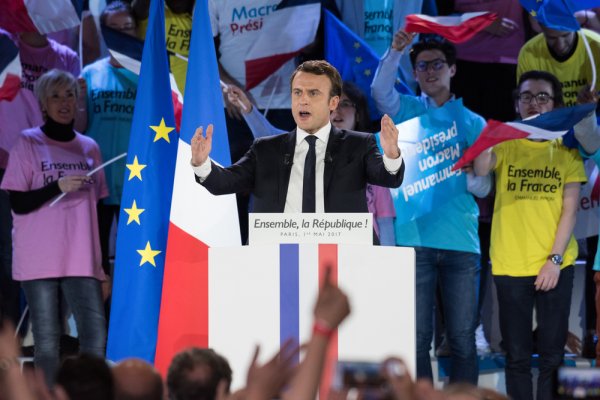 Emmanuel Macron speaks to a crowd in Paris during his campaign for the French Presidency.

It is clear that steps to promote gender balance were taken in the legislative and executive governing bodies. The unprecedented increase in women elected in the French Assembly, and the composition of the government led by Edouard Philippe, is in line with the 50/50 pledge made during the election campaign.

However, more needs to be done at various levels of power. The absence of women in key roles, both in the Ministry and the French Assembly is regrettable. The next elections in France will be held in 2019 (European Parliament elections) and 2020 (local elections). These will be key opportunities to improve women’s representation across the political spectrum.