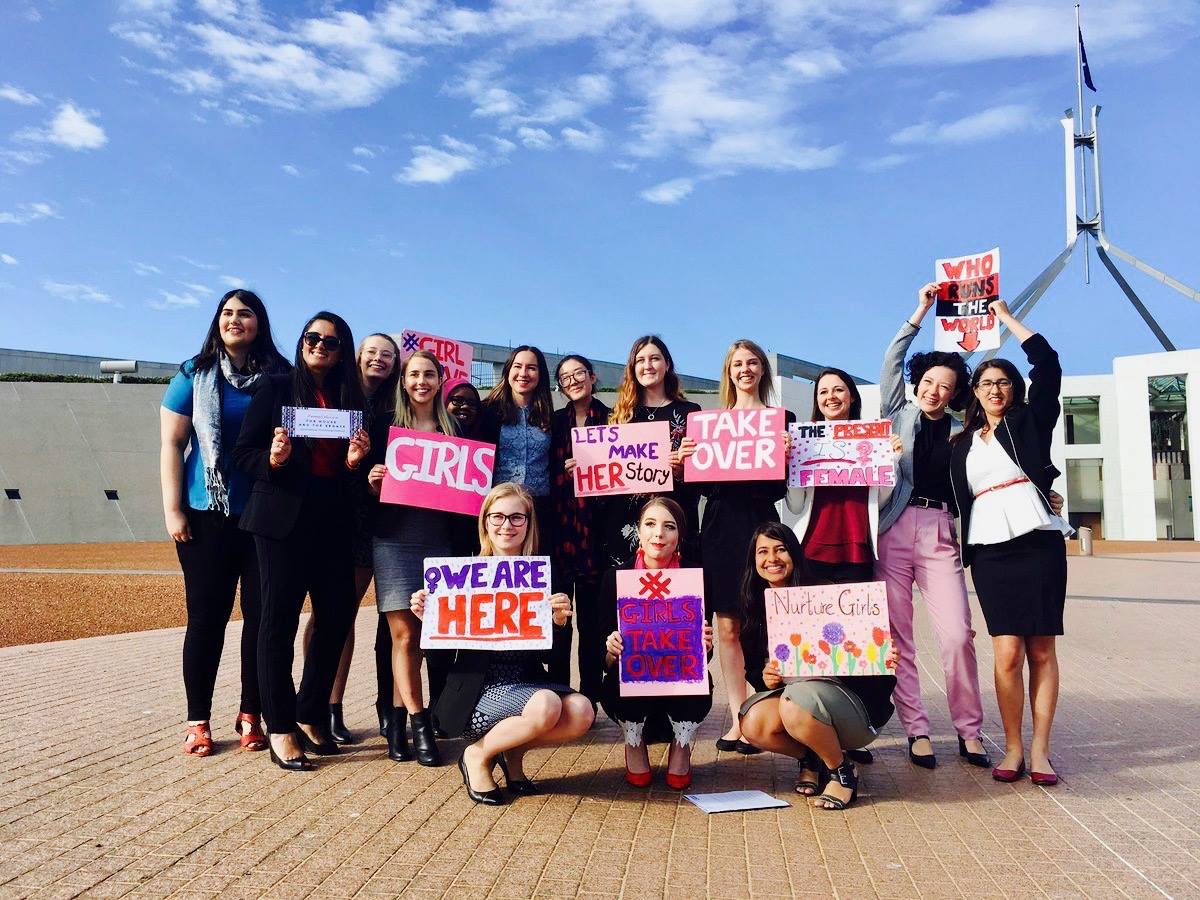 The future is female. That’s the message 17 young women took to the Prime Minister and the Australian Parliament in October. And with the election of 37-year-old Jacinda Ardern just across the pond, we were right.

As part of Plan Australia’s #GirlsTakeover program, young women from all backgrounds recently took over Parliament – a place where we are rarely seen or heard – to demand action, and to prove that we are capable and deserve a place in our Federal Parliament. With 64% of Senators and 49% of MPs fifty years or older, it is more important than ever for all parties to take action to overcome the gender and age gap in politics.

The very same day, Plan International Australia released their She Can Lead report with some damning statistics, including the shocking finding that 0% of the young women surveyed expressed an interest in pursuing a career in politics. The biggest barriers identified by the female respondents included a lack of opportunities (45%); wanting to start a family (41%); and gender itself (35%).

Ashley Streeter and Caitlin Figueiredo are passionate advocates for young women in politics. Source: The SMH

We entered Parliament, fierce and ready to become our nation’s leaders for the day, and determined to address these issues with 27 MPs and Senators, including Hon Bishop, Hon Plibersek and PM Turnbull. Full of passion and ideas, we worked with our assigned MPs to engage in a range of tasks from public speaking engagements, meeting with constituents, attending Parliament house events, writing and co-writing speeches for the MPs, running party room meetings, and presenting motions and ideas for federal policy.

During the day, MPs and Senators gave speeches on our #GirlsTakeover program and the need to include young women at the table. But as young women often do, we decided to take the future of our country into our own hands.

Three participants, Asha Clementi, Caitlin Figueiredo and Saba Awan wrote two motions vital to securing youth representation. The first motion, written for Ms. Rebekha Sharkie from the Nick Xenophon Team focused on refunding the Australian Youth Affairs Coalition (AYAC), the peak-body for young people and the youth sector. The second was delivered to Hon. Tanya Plibersek at a high-level Labor meeting, calling on the Government to reinstate a Minister of Youth by 2018.

Our plan was ambitious, but it paid off. Our first motion has been submitted and will be proposed to the House of Representatives for debate during the next sitting week – what better demonstration of democracy in action?

As noted by President Obama, getting young people into politics is the “single most important thing” governments, politicians and leaders can do. Internationally, many countries are starting to realise that solving public policy problems – climate change, racial and gender injustice, and economic inequality – requires opening spaces for young people to transform the political system. Recently, we’ve seen the election of multiple heads of state, all under the age of 40, including Emmanuel Macron, Sebastian Kurz and of course, Jacinda Ardern.

For Australia to remain competitive on the world stage, we need to recognise the capabilities of young people as leaders of today. However, we need partnerships at the local, state and federal level in order to see our ideas come to fruition. This was the challenge we proposed to both the ACT Legislative Assembly and Federal Parliament – and luckily members from all parties accepted our challenge with open arms.

For Australia to remain competitive on the world stage, we need to recognise the capabilities of young people as leaders of today

While the takeover was only one day, we ensured it was void of tokenism – besides the occasional photo, we established partnerships with individual politicians and parties to ensure future collaboration. Over the coming months, we hope to continue our work with Plan International Australia to further consult with politicians and secure implementation of the She Can Lead recommendations. To satisfy Plan International Australia’s third recommendation to nurture girls’ leadership ambitions, we also aim to establish a mentorship and training program and roundtable to have an ongoing partisan voice on national policy.

We’re not going away anytime soon

We opened the political floodgates to young women, and we’re not going away anytime soon. Plan International Australia and the participants are committed to working with our local and national leaders to continue this important conversation around deconstructing structural inequalities and to establish innovative pathways ensuring more young women and girls reach their leadership potential.

We have started a political and social revolution and just like any great movement in history, it will only end by reaching 50-50.