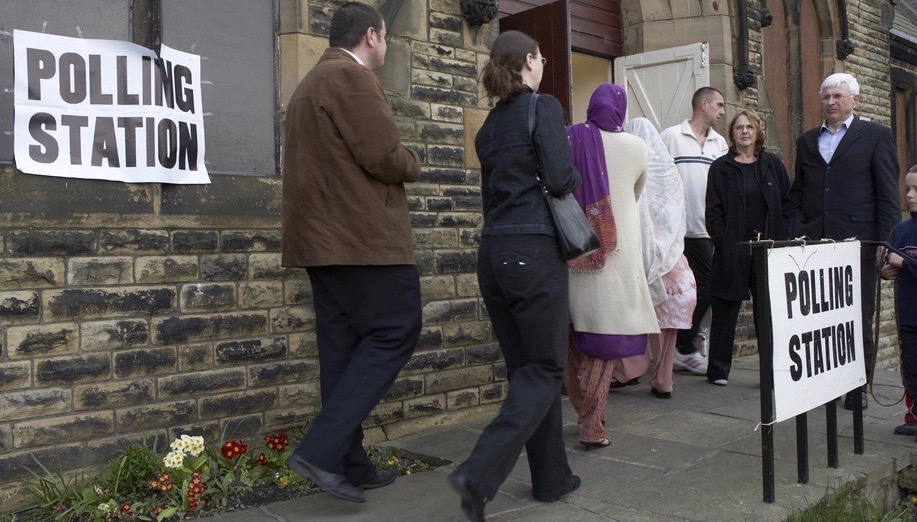 What’s sex got to do with it?: How voter perceptions of gender shape the outcome

Candidate sex, especially when a candidate is female, can colour a campaign both in terms of the media and the behaviour of other candidates. Experimental work has also shown how voters’ perceptions may be influenced by gender-based stereotypes. Yet, a more recent body of work examining stereotypes and candidate evaluations in ‘real-world’ elections contradict this assertion. Voters do not seem to apply these stereotypes at the ballot box. This highlights that a more dynamic experimental approach is needed to understand what role, if any, gender plays in voter perceptions of leadership.

US-based experimental work in the 1990s and early 2000s found gender stereotypes applied to women could be detrimental to their winning of executive office. Seminal pieces included Huddy and Terkildsen’s papers in the early 1990s which laid the foundations for many of the experimental designs and typologies of gender stereotypes later used. Their first paper found that women were thought more compassionate, they are ‘warm, gentle, kind and passive’ whereas men were agentic, they are ‘tough, aggressive and assertive’.

For both sexes, possessing male traits was most beneficial. These were linked to presumed competency on issues such as economics and the military which is valued in leaders and were preferred characteristics for occupants of higher executive office. Later studies moved from these descriptive stereotypes which describe typical characteristics of group members – ‘women are compassionate’ – to look at prescriptive stereotypes which describe behaviour group members must display to avoid backlash – ‘women should be compassionate’.

Prescriptive stereotypes relate to social norms and the notion that those who perform against expected norms will be punished (see here). ‘Male’ leadership attributes such as assertiveness, which are valued in leaders, have been found in experimental settings to be devalued when displayed by women, who are punished for deviating from their expected femininity. Simultaneously when women do exhibit expected communal traits this can undermine their competency. This is what Jamieson termed the femininity/competency bind.

However, these experiments demonstrate the presence of gender stereotypes in low-information environments. The common method is to give participants a short vignette of candidates’ biographies before asking them to evaluate each candidate. These methods offer a snapshot at the beginning of a race, of who is first out of the stalls, which might not accurately predict the final winner. Based on this work, we would conclude that women are routinely thwarted by gender-based stereotypes when running for leadership positions – yet this has not been the case.

The oft-repeated mantra is ‘when women run, women win’. Voters do not seem to apply these stereotypes to the extent some experimental evidence suggests when at the final ballot box. A more recent body of work has measured stereotypes’ effect in ‘real-world’ elections and found they have little influence on voters. For example, Kathleen Dolan conducted survey studies of abstract stereotypes at the beginning, and real candidate evaluations at the end, of the 2010 US elections. Dolan provides a picture at the race’s finish line. She found that abstract stereotypes had little and inconsistent effects on evaluations of specific candidates, traditional influences such as partisanship mattered more. Her work demonstrates that stereotypes do not act in a vacuum – they interact with other prejudices such as partisanship. Moreover, stereotypes are a cognitive shortcut and so can disappear when voters have sufficient information, such as during real campaigns.

Both bodies of literature, however, offer only static snapshots, one at the beginning and one at the end of a race, and both overlook what happens in-between, during a voter’s decision-making process. Gender-based stereotyping may be having an effect but it is missed by taking static snapshots of a dynamic process. To properly study the effect of candidate sex on voter evaluations, a different approach is needed whereby elections are treated as dynamic social environments where voters process information over time.

When little is known about candidates at the beginning of a campaign, voters may rely on stereotypes, but as a campaign progresses voters compensate for this as they seek out and receive multiple pieces of information. Within this process, sex is a piece of information about a candidate which could (especially when the candidate is female) focus voters in a way that other candidate traits do not. Gender-based stereotypes may cause voters to seek different kinds of information about male and female candidates which affect vote choice. In a simulated US presidential election it was found that, overall, subjects sought more competence-related information and stances on compassion issues for women, and that such evaluations of candidates’ traits and issues were important predictors of vote choice.

Experimental methods are still valuable as they allow researchers to examine specific causal effects and manipulate precise characteristics of candidates, such as a candidate’s sex, on voter evaluations. However, to fully understand gender’s role in voter perceptions the limitation of using low-information environments in previous experimental methodologies needs to be addressed.

Dynamic Process Tracing Environment (DPTE) software offers the opportunity to do this. The software creates an experimental environment which is closer to a real election and allows the researcher to trace the decision-making process of participants. DPTE is an internet-based program used to create any dynamic social environment where participants make a choice e.g. an election. Participants see a main ‘home-screen’ of headlines (Figure 1) which continuously scrolls down reflecting the flow of information received during a campaign where an ever-changing subset of the overall material is available at any one point in time. 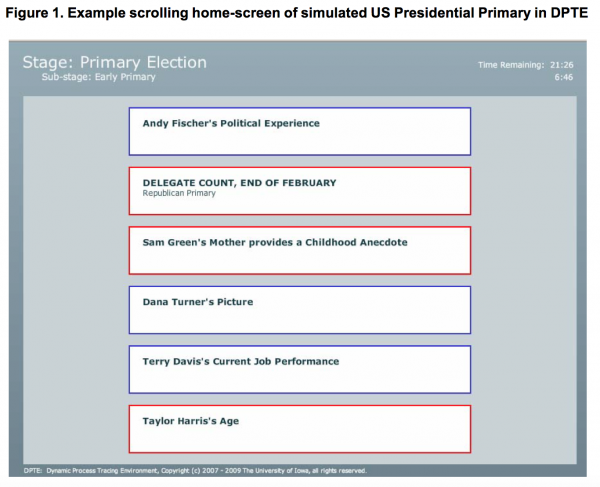 Once a participant clicks on a label to access that item (Figure 2) the home-screen continues to scroll in the background so, like a real election, there is a cost in terms of missed information and participants only ever receive a selection of all possible material before voting at the end of the experiment. 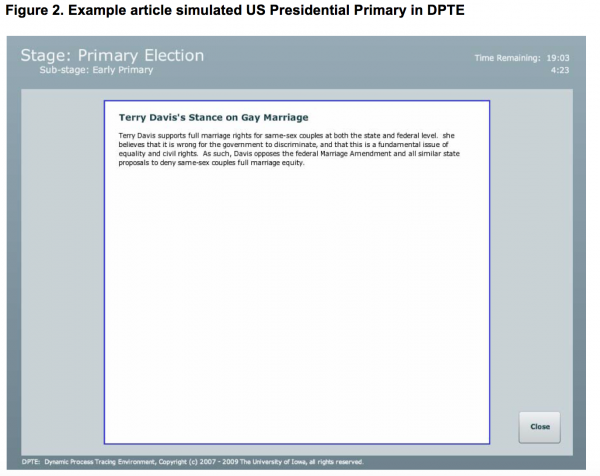 The experimenter controls what information is available, and how easy it is to access by how often it appears in the main screen of scrolling headlines. DPTE traces participants throughout the election, recording all information they view about each candidate. Using DPTE would allow researchers to trace voters’ decision-making process from beginning to end whereas current work only offers static snapshots of this process. A more dynamic approach offers a fruitful new method for this area of research.

This article has been reposted from LSE British Politics and Policy and the original can be found here.